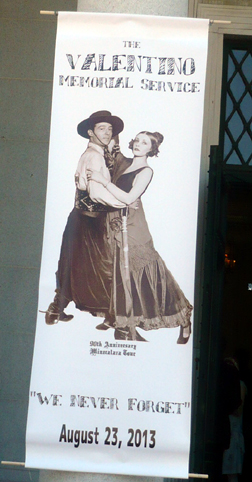 August 23, 2013 I went to the Valentino Day of Remembrance at the Hollywood Forever Mausoleum behind the Paramount Studio in .  I have never been there before for the tribute but had heard the stories; usually when Im there the halls echo with only my footsteps.

What a lovely gathering it was! Not creepy or weird but it was more like a teach-in of my youth.  Rudolf Valentinos career was short, very shortand yet the chapel was full to overflowing.  Stella Grace with her stern hand moved people just where she wanted them, doing many to the thankless little things that make programs run smoothly. The committee for Valentino memorial includes; Chanell OFarrill, Tracy Ryan Terhune, Marvin Paige and the formidable Stella.

In a real sense this was Tracy Rayan Terbune service, the theme was the Mineralvava Tour a flyer listing the stops and a facsimile of one the tickets to the dance / beauty contest were given out in a package of little goodies to everyone there.

I smiled at the reading that Garrett Bryant did from a vintage news report of the Mineralava tour, how the flappers were all a twitter and even the men at the appearances appreciated the charms of Rudy. I looked around and today the younger women were texting and the men in the chapel were old enough not to be intimidated by Valentino smoldering sexuality.  Many of my personal friends were there to pay their respects.

The name of the very gifted videotogapher was Frank Labrador, the images in his videos; the film clips, still photos, newsreels, pictures of documents and the music, great stuff.

Music was a big part of the event.  I loved the Argentine Tangos by Michael Espinoza and his elegant partner, Bracha Loren; the slow dance down the aisle and than they danced an early Tango, it was a little faster and the intricate footwork was breathtaking.  There was the clear voice of Sharon Evans with Rick Rogers  Shiek of Araby. And a song that Vince Morton explained was written by Valentino, himself.   There were essays and poetry read by Chris Cipollini & Allison Francis.

There were others: Christopher Riordan, the dancer, actor, FaceBook friend gave us a rather sad update of the state of Falcon Lair, a location that was his home. He partied there and dreamed in the gardens as he lingered over his morning tea, now the 100 trees are gone.

A surprise guest was Michael Ankerick reading from his book on Mae Murray passages about Valentino & Mae.

After the service ended with the 23rd Psalm read out loud by everyone; many of the group stopped to speak with a member of the Valentino family, Sylvia Valentino-Huber and some moved to the crypt were Valentino was laid to rest 87 years before and every year since fans have gathered at a memorial service, this was number 86.

James Neibaur wrote in the Racine Film Examiner August 23, 2013 By 1926, Valentino agreed to do a sequel to "The Sheik." Sadly, "Son of the Sheik" was his final film. In August of 1926, while on tour promoting the films release, Rudolph Valentino fell ill and died at the Hotel Ambassador in .

Valentino's legendary status continues, but so do the myths surrounding him as a limited performer who never ventured outside of his typecast roles. Investigating a few of his lesser known films that are accessible will help one realize the depth of his acting capabilities and the real reason why he has maintained iconic status nearly 90 years after his passing.

No I didnt forget to mention it, I was just holding off until the end, Mabel Normand was there when he was laid to rest in August 1926. 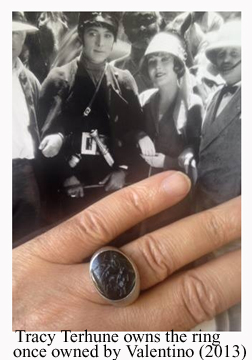