The August 26, 1912 Albuquerque Journal writes of Mabel Normand making The Tourists in May 1912, filming at the Atchison, Topeka and Santa Fe train station, Alvarado Hotel, Harvey House and the Barelas neighborhood near the train station in Albuquerque, New Mexico.

The California Limited left Los Angeles on May 27, 1912 with the troupe of Biograph players, which included Mack Sennett, Mabel Normand, Charles West, William J. Butler Tony OSullivan, Grace Henderson, Kate Toncray, Harry Hyde, Alfred Paget, Frank Evans and camera operator Percy Higginson, we know this as they were all part of The Tourists.

California Limited:  (via ) was a route of the , and Santa Fe Railway. The railway was sometimes abbreviated as just .  The company had incorporated the name of the capital, in the 1860s.  This line was noted for its freight services but ended its operations as a separate entity .

The AT&SF had been the way that the cattle arrived in the stockyards and film was shipped from the studios in to the processing plants and was a very important component to linking the movie industry; it was also early in the 20th Century it became noted for its passenger car accommodations. The train tracks were adjacent to the .  The trains were used in a number of Keystone movies.

The enduring link between the railroad and Hollywood was created by Johnny Mercer, when he won an Oscar for the 1945 song On the Atchison, Topeka and the Santa Fe, sung by Judy Garland in The Harvey Girls.

Back in 1912 after the time that Mack Sennett spent in with D. W. Griffith and the Biograph Company, he developed a plan to move from the East Coast and Mabel Normand was very much a part of his plan.  The date that Mack Sennett liked to use was July 1912 when he met with the New York Picture Company, formed a few years earlier by Adam Kessel and Charles O. Baumann.  The actual date of the incorporation of Keystone was . At the time, that the interview was done in the Albuquerque Journal, Mack Sennett was not yet using the name Keystone.

A party of tourists, on their way East across the continent take advantage of the short stop at , to pur­chase wares of the Indians assembled around the near the station. A young tourist named Trixie, played by Mabel Normand becomes absorbed with buying Indian merchandise and her friends try to get her to return to the station but they too become so engrossed in the Indi­ans and their wares that they miss their train. Trixie decides to take off on her own to do a bit of sight-seeing until the next train comes along.  She entices a local chief to show her the points of interest, much to the displeasure of his wife and the other women of the neighborhood.

By the time the train pulls into the station Trixie needs to be rescued by her traveling companions and never fear she escapes her pursuers by hopping on the train and waving fair-well to .  It is all very exciting and fun with a real look at 1912 ; the camera work done by Percy Higginson is wonderful. 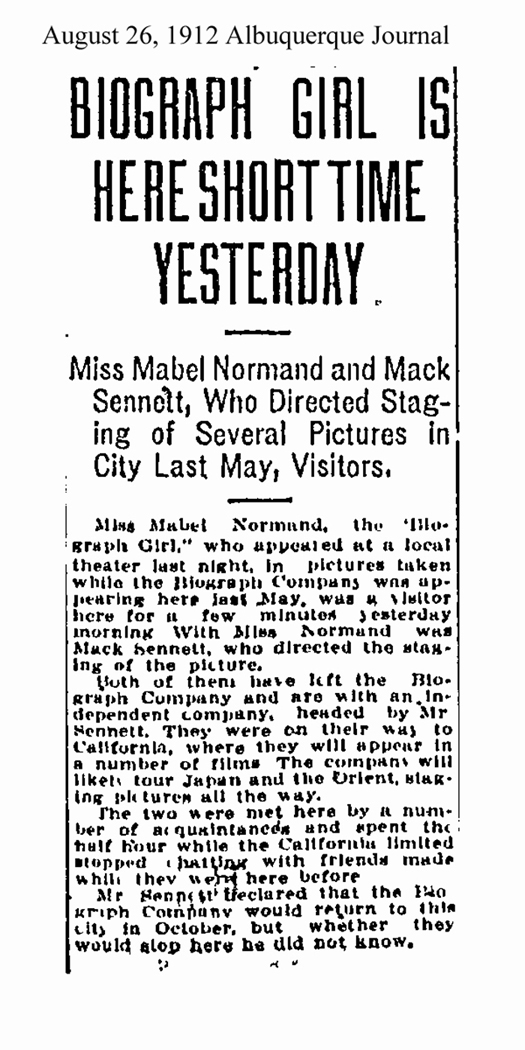 Miss Mabel Normand, the Biograph Girl, who appeared at a local theater last night, in pictures taken while the Biograph Company was appearing here last May, was a visitor here for a few minutes yesterday morning.  With Miss Normand was Mack Sennett, who directed the staging of the picture.

Both of them have left the Biograph Company and are with an independent company, headed by Mr. Sennett.  They were on their way to , where they will appear in a number of films.  The company will likely tour and the Orient, staging pictures all the way.

The two were met here by a number of acquaintances and spent the half hour while the limited stopped chatting with friends made they were here before.

Mr. Sennett declared that the Biograph Company would return to this city in October stop here he did not know.

Mary Pickford once wrote of the escapade on the train from to as the troupe celebrating New Years Eve and New Years Day 1912.  The Biograph players were on the train, D. W. Griffith and cast and crew, laughing and joking and having a grand time.  The trip usually took between one week and ten days.  They would have been in the sun by the middle of January.  The Mender of Nets was copyrighted , which makes sense.  Mabel Normand also worked on a number of California Biograph productions.  Most were directed by Mack Sennett however D. W, made Mender of Nets at .  Mary Pickford and Mabel Normand worked beautifully together; this movie shows the wonderful dramatic ability of Mabel, it is a real gem.

THE TOURISTS directed by MACK SENNETT starring MABEL NORMAND
www.youtube.com
This YouTube vedio was posted on FaceBook by John Clark a freelance photographer in London, the same age as my son (I wish I could interest him in silent film).John created a Mabel group on FaceBook, there are a number of very nice vedio links at his group.