one of his models into the Movies

Penrhyn Stanlaws wrote in the Movie Weekly 1921 April 16, page 11 Artists Models who have become Movie Stars; that the training that models posing was an important skill that translated beautifully before a moving camera.  I have maintained stridently that this understanding of the strength of the camera and how to move before it created the Mabel we see on the screen and that she was fortunate that she didnt have to unlearn stagecraft, as she went from modeling (posing) to posing before a camera which took moving pictures.  The article didnt seem to be written by a man that was intimidating although Mabel seemed to be frightened by Stanlaws. 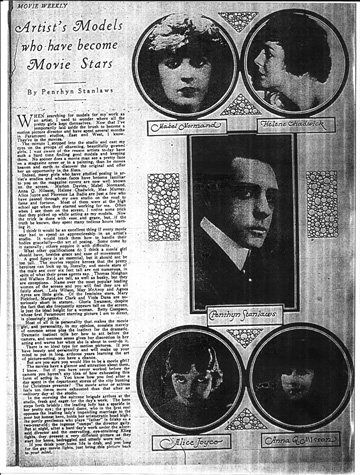 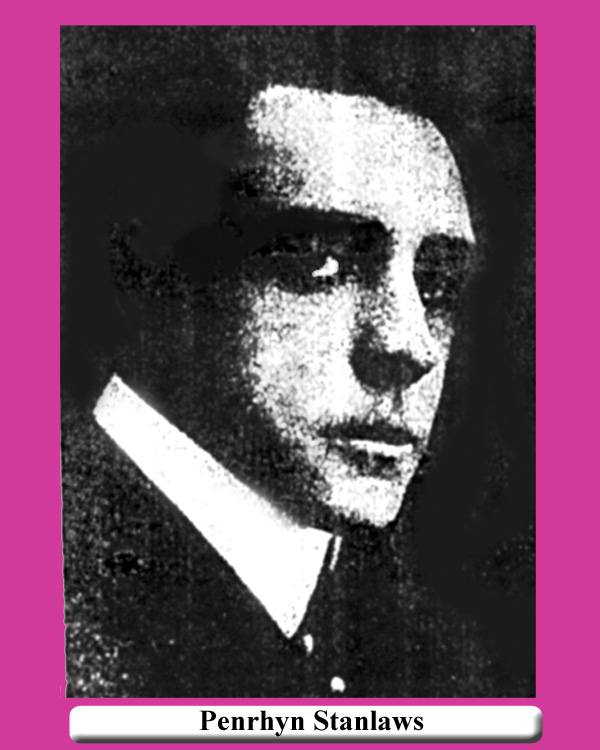 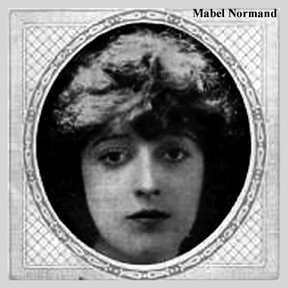 When searching for models for my work as an artist, I used to wonder where all the pretty girls kept themselves.  Now that Ive temporarily laid aside the brush to become a motion picture director and have spent several months in studios. East and West, I know. Theyre in the movies.

The minute I stepped into the studios and cast my eyes on the groups of charming, beautifully gowned girls, I was aware of the reason artists to-day have such a hard time finding good models and keeping them.  No sooner does a movie man see a pretty face on a magazine cover or in a painting, than he moves heaven and earth to discover the original and offer her an opportunity in the films. 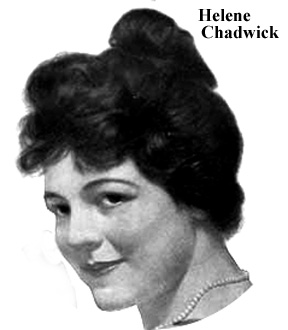 Indeed, many girls who have studied posing in artists studios and whose faces have become familiar to you on the magazine covers are now well known to you on the screen.  Marion Davies, Mabel Normand, Anna Q. Nilsson, Helene Chadwick, Mae Murray, Alice Joyce and Florence La Badie are just a few who have passed through my own studio on the road to fame and fortune.  Most of them were at the high school age when they started working for me.  Often when I see them on the screen, I notice some trick that they picked up while acting as my models.  Now the trick is done with ease and grace, but, if the truth be known, they spent many tedious hours learning it.

I think it would be an excellent thing if every movie star had to spend an apprenticeship in an artists studio.  It would teach them how to handle their bodies gracefully  the art of posing.  Some come by it naturally; other acquire it with difficulty.

What other qualification so I think a movie girl should have, besides grace and ease of movement? A good figure is an essential but it should not be too tall.  The movies require heroes that the pretty heroines can look up to, literally, and movie stars of the male sex over six feet tall are not numerous, in spite of what their press agents say.  Thomas Meighan and Wallace Reid are tall, as well as husky, but they are exceptions.  Name over the most popular leading women of the screen and you will find they are all fairly short.  Lois Wilson, May McAvoy and Agnes Ayres are little girls.  Of the feminine stars, Mary Pickford, Marguerite Clark and Viola Dana are notoriously short in stature.  Gloria Swanson, despite the fact that she frequently appears tall on the screen, is just the ideal height for a woman.  Betty Compson, whose first starring picture I am to direct, is pleasingly petite.

Most of all it is personality that makes the movie girl, and personality, in my opinion, consists merely of common sense plus the instinct for the dramatic.  Dramatic instinct tells her how to act before the camera, and common sense gives her discretion in her acting and warns her when she is about to over-do it.

There is no ideal type for motion picture.  If you have beauty and personality and will make up your mind to put in long, arduous years learning the art of picture-acting, you have a chance.

But are you sure you would like to be a movie girl?  The movies have a glamour and attraction about them, I know.  But 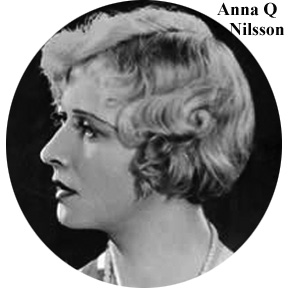 if you have never worked before the camera, you havent any idea of how exhausting this form of acting is.  You know how you feel after a day spent in the department stores of the city hunting for Christmas presents?  The movie actor or actress feels ten times more exhausted than that after an ordinary day at the studio.

In the morning, the suitcase brigade arrives at the studio, fresh and eager for the days work.  The hero steps forth briskly; the leading lady has a sparkle in her pretty eye; the grand dame, who in the first reel opposes the leading ladys impending marriage to the poor but honest hero, holds her aristocratic head high; the portly gentleman who plays father is frisky as a two-year-old; the ingénue vamps the director gaily.  But at night, after a hard days work under the aforesaid director and the enervating, eye-straining Klieg lights, they present a very different picture as they start for home, bedraggled and utterly worn out.

If you think your home life is drab, and you long for the gay movie lights, just bring this picture back to your mind.

Stanlaws, directed Betty Compson in 4 film 1921 and 1922 and did 7 altogether for Paramount both on the East and West Coasts but for me it isnt his films nor any particular drawing he did of Mabel; for me it is his printing of Olive Thomas titled, Between Poses; it is the picture I will always connect him with. 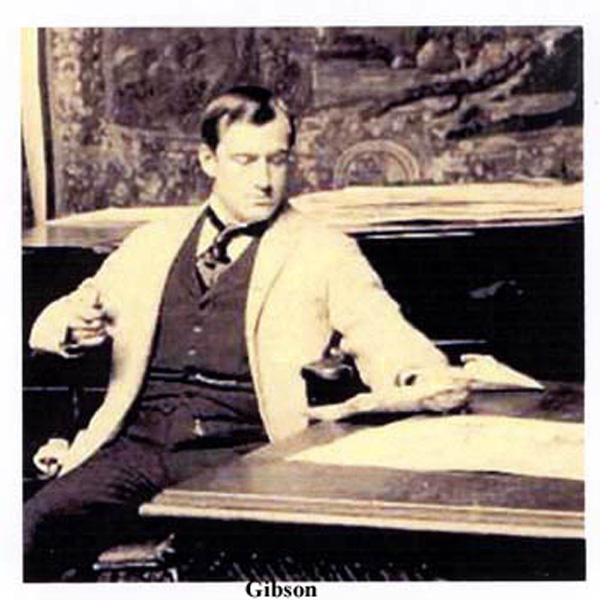 Mabel didnt say anything really nasty about him, she didnt seem to feel about him the 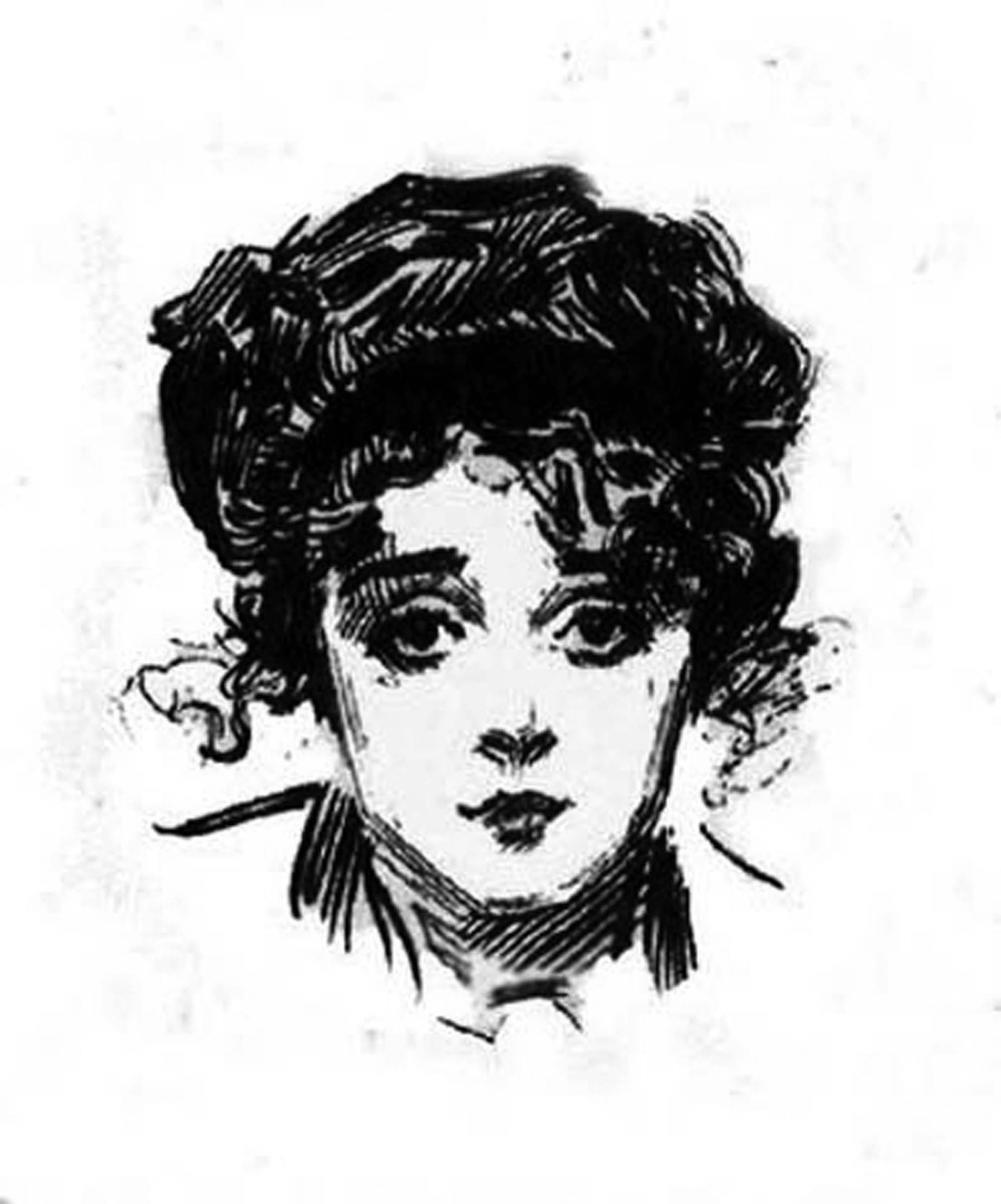 way she did about Gibson and others.

Penrhyn Stanlaws' studio was in the Woodward Hotel. He was a demon for color, and one day I thought I'd please him by show­ing him a little sample of a rose-colored dress my mother was going to make for me. He spoiled the whole morning, tossing his hands aloft and raving about the atrocious hue. He frightened me so I've never worn a rose-colored dress to this day... 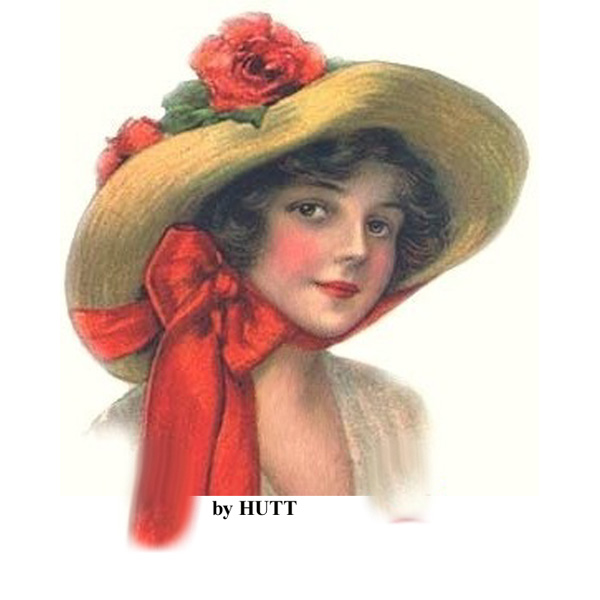 Henry Hutt was on the top floor of the Life Building, and he made the most lovely faces I ever saw. He was tireless at the easel, and I used to tug at his cramped legs until the 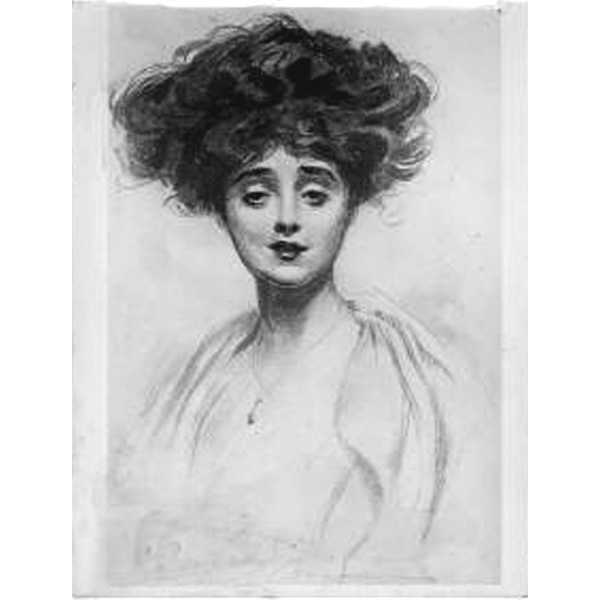 circulation was restored and he could move himself.

Mr. Gibson was truly a master. How I loved to watch, between poses, as he filled in the outlines of my face or body with his soft warm crayons. I used to touch the picture with my finger tips when he wasn't looking.

, 30 MADCAP MABEL NORMAND  ¾  The True Story of a Great Comedienne

In an article from the Syracuse Herald dated 23 Penrhyn Stanlaws took a jab at the movie beauties "Womans looks are sacred to her." Therefore, the usual fury of a woman scorned pales before, the outbursts of a recognized beauty criticized. 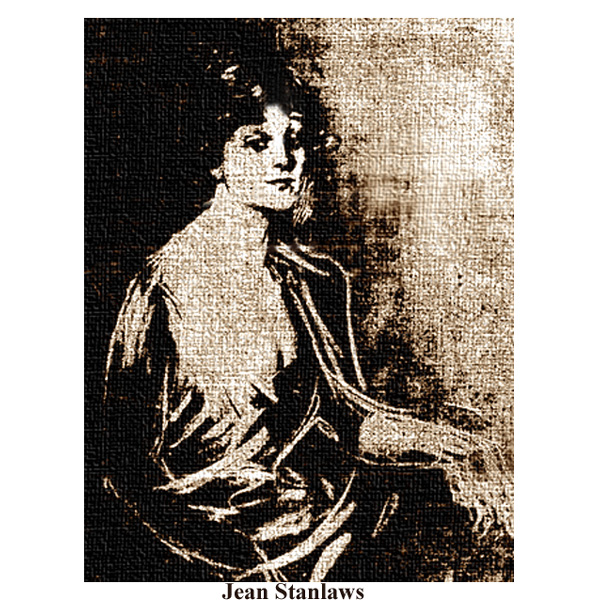 He came to the in 1901 when he was 24 years old to attended , financing his education using his talent as an illustrator.  After 4 years of college, he went to to continue his study of art. On his returned from , he became an immediate success.   In 1913, Penrhyn Stanley and Jean Pughsley were married.  Jean was the daughter of Lester P. Bryant of and .  Joans mother had died in and she was staying with friends in .  In 1918, she gave an extensive interview to Elizabeth Van Benthuysen, explaining that she was not jealous of the girls her husband painted.  She doesnt think any more of a posing model, whose face and form will soon regale the exhibition galleries of the magazine readers, than the wife of a wool merchant would regard with disfavor a rare bit of merino.  She knows her husband looks at models with a critical eye. 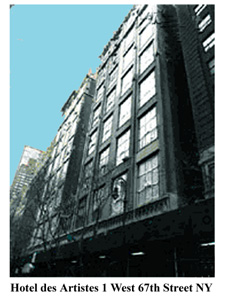 Stanlaws was responsible for building the Hotel des Artistes, which stands on . It was built as a co-op with rental units for artists studios in 1917.  The Paramount Studio sojourned didnt last. It was written that his idea of an American Beauty was Anna Q. Nilsson, she was lovely. But his wife said he had a critical eye

Stanlaws had left by October 1923 he was living in the artists colony in outside of .    He was complaining about the Miss America Beauty contest in Atlantic City, among things he said about the contest was that it should be limited to just a bathing suits competition, no evening dresses and only artists should be judges, you get the ideal.

Among the jobs, Stanlaws held other then as a famous artist, perhaps a less then successful director he added newspaper staff artist for the Chicago Daily News and a regular contributor to the covers of the Saturday Evening Post. He did come back to in 1943. Jean, his wife continued to live in , while Stanlaws lived on in and began to paint portraits in his soft and fluffily style, and he was now a man nearly 70 but no longer the painter of beautiful young woman.  Penrhyn Stanlaws died in at the age of 80, he was living at on 57 when it was said that a fire had started when he fell asleep in a chair while smoking in his studio alone. 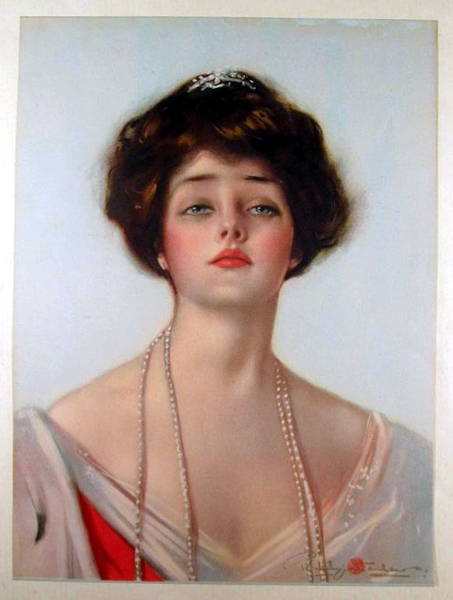 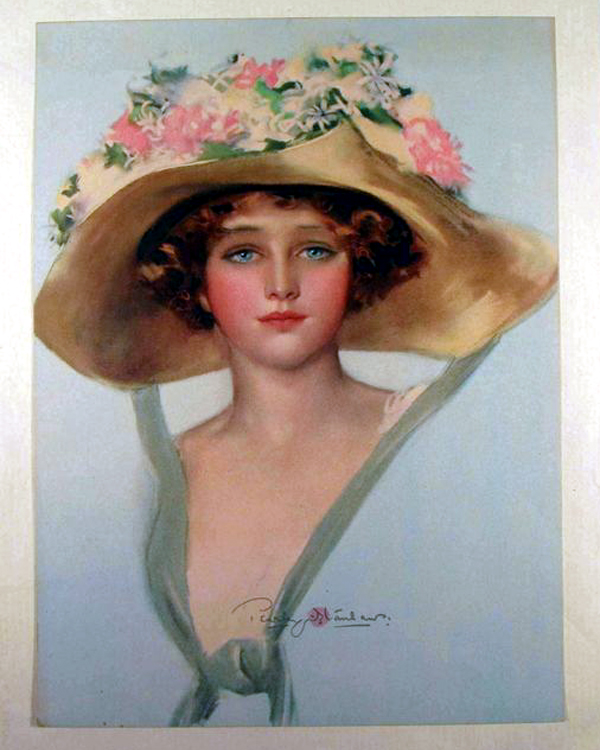 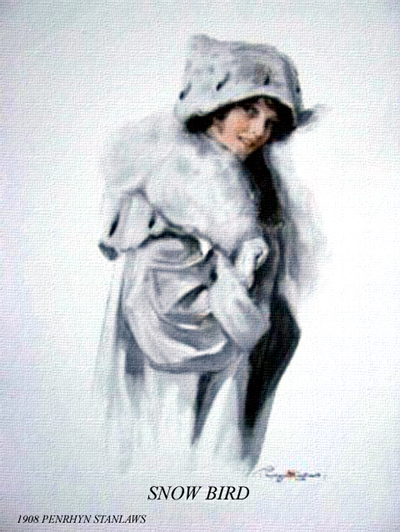 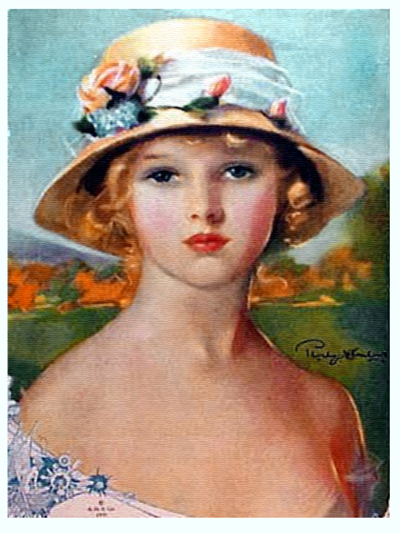 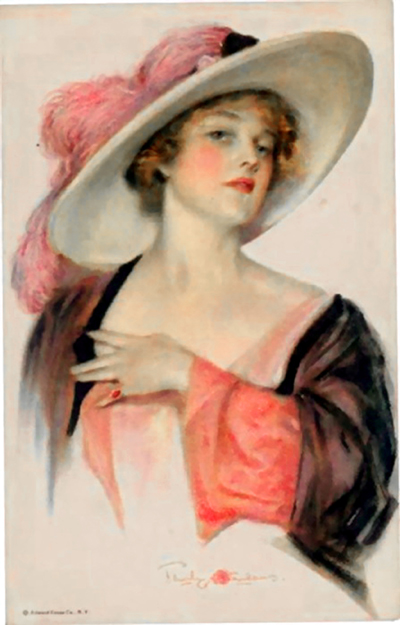