In these picture we see (1) Mabel Normand and Roscoe (Fatty) Arbuckle pointing to the dismayed seal.  (2) shows Mabel diving overboard after Roscoe, who in (3) is seen to be falling in what looks like awkward and certainly is dangerous fashion.  (4) exhibits Mabel getting ready for another plunge and (5) shows Roscoe doing another purposely awkward dive.  In (6) Mabel and Roscoe have cajoled Big Ben to come out to get something to eat.  And in (7) we witness Mabel doing the last dive of the day, a somersault in embryo. (8) Roscoe is posed to make a belly flop (9) Mabel is ready for one more dive. 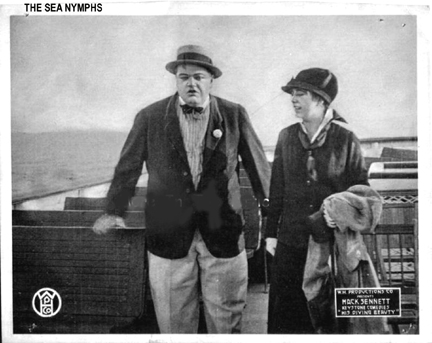 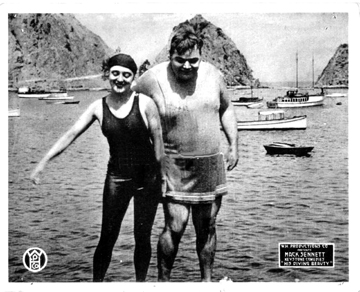 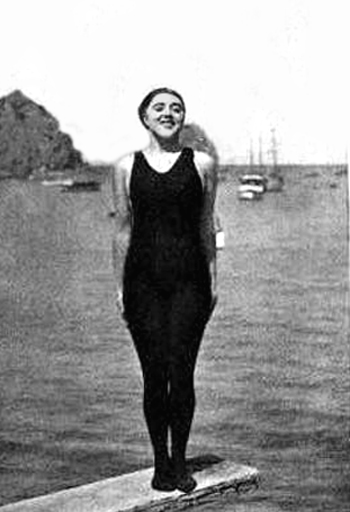 In September 1914, Mack Sennett took a troupe of players and crew to Santa Catalina Island off the coast of southern California, (21 miles from Long Beach, as the seagull flies) to make movies.  He at the same time made  and Her Marine Gardens and The Sea Nymphs while fishing and swimming and generally having a wee bit of a vacation away from Keystone.  As Sennett was working on both films, and there isnt any documentation that I could find indicating the anyone but Sennett directed either of these shorts, it seems unlikely that Roscoe Arbuckle had control of the making of The Sea Nymphs The IMDb lists him as the director but Brent Walkers Mack Sennetts Fun Factory does not and I agree with Brent Walker on this.

The two reels of The Sea Nymphs (working title - Catalina Story) according to the production records from the New York offices shows that it was filmed September 8 through September 12, 1914 and was finished September 12, 1914 and was received in New York on October 1, 1914.  Along with The Sea Nymphs, also received a half reel with the working title Catalina educational.   The Sea Nymphs was originally released and was reissued using the name His Diving Beauty though W. H. Productions in 1918.  The Catalina educational ½ reel was released under the title  and Her Marine Gardens. 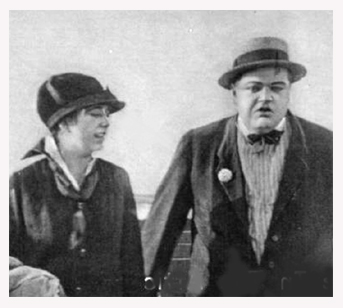 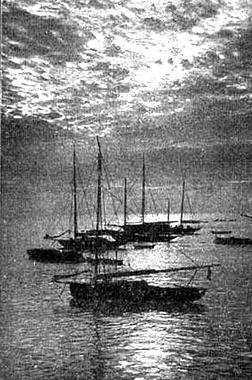 The plot is a little gloomy, which maybe the reason that some people think it is one of the Arbuckle comedies, like He Did and He Didnt but as dark as the plot sounds on screen these actions can be very funny. Ben Model wrote the summary for IMDb and it parallels the newspaper plot synopsis found in the Reno newspaper below.

Fatty, his wife and mother-in-law are on a ferry to for an outing. So are Mabel and her father. Mabel and Fatty flirt with each other, and Fatty tosses her father overboard, thinking he is another suitor. The boat docks and the two go their separate ways. Mack Swain tries to pick Mabel up, too. All go to rent bathing suits, Fatty locks Mack in a dressing room with mother-in-law. Fatty and Mabel feed a large fish to a seal at the water's edge, and then engage in some graceful and comic diving. Swain, Avery, Durfee and see them diving and corner them...everyone's relationship to each other is revealed.

The picture of Roscoe and Mabel with a huge tamed seal named Big Ben was used in a number of magazines and newspapers.  There is a statue of Ben, the Hungry Sea Lion on erected in 1975 for the Bi-centennial; it was moved to the end of the pier in 2009.  Ben is said to have first appeared in Avalon harbor in 1898 and was said to flop through the streets of the town looking for snacks and posing for tourists snapshots and for Mack Sennetts movie, only disappearing in the early 1920s.

While Mabel was creating Mickey in 1916 some of her friends went back to Catalina to get her a goat for her movies, I already told you about it at 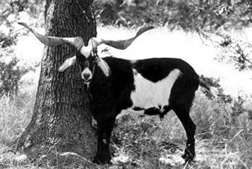 If you have never been to , let me tell you a little about it, as it is a real escape, it is less than 25 miles from shore and for more then a century, a place to slow down.  There is really only one town on Catalina the harbor town of , 99% of the population of the island lives there. The Sea Nymphs was not the first or only film made on Catalina.  The first known short film was Essanay Feeding Seals at Catalina Isle (1910), in 1912 the master, D. W. Griffith sailed to Catalina to make his Mans Genesis (1912) and then Big Ben became an international movie star along side Mabel and Roscoe in The Sea Nymphs (1914).  Sid Chaplin made A Submarine Pirate (1915) where it is reported the first underwater scenes shot at Avalon.

It was also in 1915 that an enormous fire destroyed much of the town of , some of the devastation can be found in Thomas Ince, movie Civilization (1916).  Avalon is rebuilt but has remaind a small town as the island has only a limited fresh water supply.

Lee Rosenthal believes the first South Sea Island movie was made on Catalina in 1916 called Pearl of Paradise to read more about the films made on and around the Island, I recommend the book Catalina in the Movies (two versions of Robert Louis Stevensons Treasure Island one in 1918 and another one in 1924; two versions of Captain Blood 1924, and in 1935; two versions of The Sea Hawk 1924, remade in 1940 ), as well as the early Technicolor movie The Black Pirate (1926) starring Douglas Fairbanks, and the big-budget Old Ironsides (1926). And yes, Cecil B. DeMille made exotic scenes for Male and Female (1919);The Ten Commandments (1923); Feet of Clay (1924); and The King of Kings (1925) on the island. And tons of Westerns were made in the interior, thats why there are buffalo on the but it is in Lee 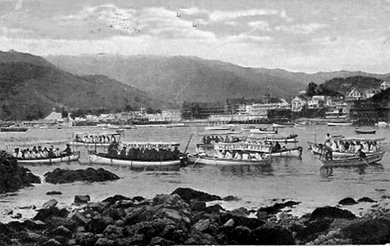 When Mabel and Roscoe made their movie on Catalina, William Wrigley hadnt come to the , he only purchase it at the end of the 1920s and built the Casino to show movies and for dances (not for gambling).  In the years during World War 2 the island was closed to visitors as the Wrigley family leased the entire island to the military for a dollar a year.

Avalon is still the harbor town where Mabel and Roscoe feed Big Ben and the sea nymphs played in the water, it is much the same, time has been gentle to the . 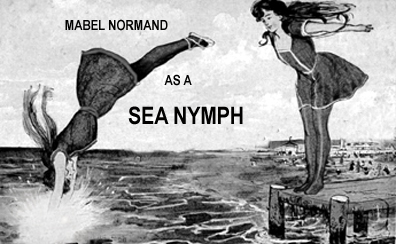 Wigwam Theater Has a Screamer

The two-part Keystone display, The Sea Nymphs, will be shown for the last time at the Wigwam Theater tonight.  This film is a scream from start to fish and more than pleased the large crowd that saw it last night.  The synopsis is as follows:

Fatty, with wife, mother-in-law and numerous band boxes, trunks, bags and bundles, goes for an outing at .  On the steamer he sees charming Mabel and is badly smitten.  Mabel is traveling with a very insignificant looking little father with side whickers.  Fatty, not knowing the relationship, decides he will interfere with that old duck who is flirting with a young chicken, and accosting the old duck on the deck pitches him overboard.  Then he goes in quest of Mabel and is enjoying his solitary innings  when he finds out whom he thrown unceremoniously overboard.

Father is rescued and they land at .  Here it is that Ambrose, chronic masher, put in an appearance and is introduced by father to Mabel.  Everybody prepares to go in bathing.  Fatty, who is something of a schemer, contrives to get his mother-in-law and Ambrose locked in the same compartment of the bathing pavilion, and he and Mabel run away into the surf, where they have a great swim and feed the seals.  Meanwhile the frantic mother-in-law is rescued from her unconventional tête-à-tête with Ambrose.  Mabels father enlists the muscle of the latter, who is jealous of his plump rival, and together they attack Fatty.

The latter does them up, however, and then he and Mabel proceed to give a diving exhibition.  Mrs. Fatty and mother-in-law witness this thrilling program executed off the end of a plank vibrating from the end of the high pier.  Mabel excels in the dolphin plunge.  The crowd on the shore cheers loudly  all except Fattys immediate family, which is saving its strength for future punishment.  Fatty gets his  and the siren Mabel is hastily cloaked and dragged off by her father. 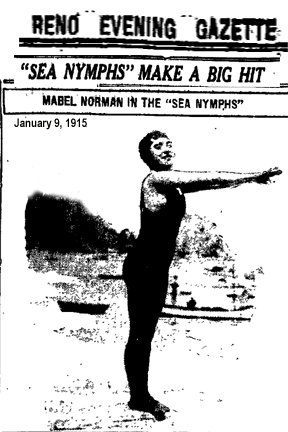 [The] Sea Nymphs -- Keystone (Two Reels) November 23. -- Fatty neglects his wife, and even his mother-in-law, when he spies the attractive Mabel. The girls father takes a dislike to her stout friend, and introduces Ambrose into the love race. Fatty manages to have his mother-in-law and Ambrose locked in a dressing-room while he and Mabel give a diving exhibition. Mabels father enlists the muscles of Ambrose, and together they attack Fatty but without making any impression on him. Had the angry parent been wise he would have sought the aid of Fattys wife and her mother who grow impatient at his flirtation, and demonstrate to the crowd how big men should be whipped.

()--Pretty soft for some of these Keystone actors this nice warm weather. While the mercury is trying to blow out the top of the bulb, the water in the Keystone tank gurgles merrily while the actors do the sea nymph stuff. The other day Fred Fishback, in diving in the plunge, misjudged the distance and collided gracefully and firmly with the concrete wall, and was rendered temporarily helpless. Mabel Normand did the Carnegie stunt and saved him. Sure I know that Fred Palmer is a publicity man, he has to make a living some way.

Mabel Normand, featured star with the Keystone Film Company, had three whole days vacation and she took advantage of her rest. Last winter Miss Normand purchased a sixty-foot yacht and had it thoroughly overhauled and refurnished throughout. When it was completed it was a thing of beauty--but since the rainy season the Queen of the Movies has been too busy helping Mack Sennett take advantage of the sunny weather in making of Keystone two-reel features to find time for yachting. When the three-day vacation came along Mabel stocked up the craft and took a party of friends to Catalina, cruising around the island and enjoying the breezes, fishing and quiet of the Pacific in its most pacific condition.

[photo caption] Mabel Normand and Big Ben, the tame seal, disporting in the surf at . 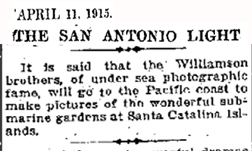 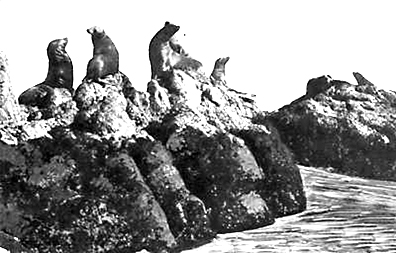 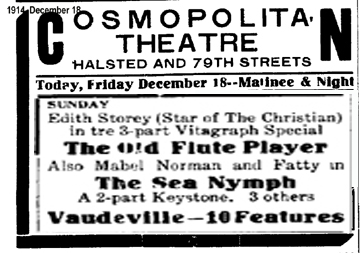 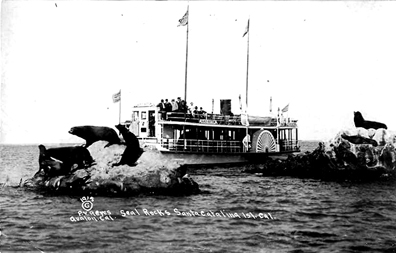 Old Ben was an unusually large and friendly sea lion who first appeared in the Avalon harbor in 1898. He quickly became the town mooch, flopping through the streets looking for fish snacks and posing for snapshots with Santa Catalina tourists. He even appeared in a 1914 movie, "The Sea Nymphs," before swimming off and disappearing in the early 1920s.

Avalon never forgot its flippery town pet, and in 1975 it erected a life-size concrete statue of Old Ben as its Bicentennial project -- a statue reportedly so lifelike that real seals would bark at it. That statue was replaced by an identical one made of bronze in 1986, and in 2009 it was moved from its spot on the end of a pier to a more shutterbug-friendly downtown location.

The East Coast also has its own adored seal statue, but Ben was the first. 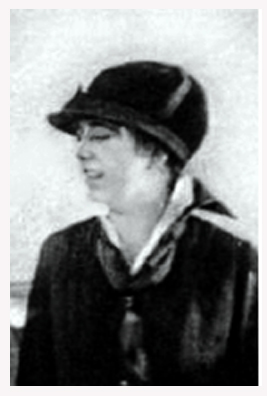