Mabel said the Alla Nazimova was one of dearest friends.

From the manner in which Nazimova's modernized "Camille" held the attention of the audience which viewed it, for the first time, in the ballroom of the Ritz-Carlton Hotel, New York, the evening of Wednesday, September 7; from the applause the picture evoked and from outspoken commendation of it by professional personages there, Metro officials believe that in the screen version of the great Dumas play it has one of the most powerful box office attractions ever produced...

Nazimova was present in person at the showing, as also were Rudolph Valentino, who played Armand, and Natacha Rambova, who designed the settings. Following the exhibition there was a reception in the . The production was directed by Ray C. Smallwood and the scenario written by June Mathis. The photoplay was viewed by an audience whose composite photograph might have been entitled "A Celebrity."

At last has seen Douglas Fairbanks' "The Thief of Bagdad." No picture ever made has been awaited with such eager interest by the film colony itself, and the opening night at Grauman's Hollywood theater was one of those unforgettable occasions, marred only by the absence of Doug and Mary, who were somewhere on the high seas, bound for America.

The scene was an amazing one, from the crowd that packed the streets outside, to the interior of the theater, transformed for the production of this picture into a veritable Arabian Nights palace, filled with incense and Oriental perfumes, magnificent tapestries and rich colors, dancing girls and throbbing Eastern music.

In the audience were Norma Talmadge, Constance Talmadge, Madame Alla Nazimova, with the most fascinating new bob above a frock of gold and coral; Florence Vidor, in cream chiffon with orchids; Mr. and Mrs. Thomas Meighan, Mr. and Mrs. Harold Lloyd (Mildred wore

..(Mabel was writing about going to New York).we finally drew up a five-year contract. I was to get fif­teen hundred dollars a week and ten percent of the gross re­ceipts. In the summer I was to make pictures for him. There was a sliding scale of salary and percentage increases and an interest in my picture comedies, until I was to be getting eight thousand a week during the last year of the contract.

But even after I signed, I was worried about my voice, so I went to see Alla Nazimova, one of my dearest friends, in her lovely home on Sunset Boulevard ( she lived at the ). She had a high wall about her estate and a great swimming pool, and when either of us was blue we'd telephone and I'd call on her and we'd have a fine time swimming and telling each other how good we were, and how misun­derstood, until we felt better with ourselves and the world.

Nazimova called herself Peter Winter, the name under which she wrote scenarios. Peter finally leased her grounds to a hotel company.

Peter told me not to worry about my voice, that it was soft and throaty and all right, and that I'd soon learn to pitch it properly across the footlights.

Poor Peter! She, too, walked in the shadows, Charles Bryant leaving her to marry another woman after she and Bryant had been companions for years, the world thinking them wed.

For more on Alla Nazimova, we recommend the book NAZIMOVA by Gavin Lambert, which can be found at this link to Amazon.com

Alla Nazimova, born Mariam Edez Adelaida Leventon, (May 22, 1879 - July 13, 1945) was an American theater and film actress, scriptwriter, and producer. She was sometimes called just Nazimova. Also she wrote under the name Peter Winter

Nazimova was one of three children of Yakov Leventon and Sonya Horowitz. The family was Jewish and lived in Yalta, Crimea, then part of the Russian Empire, now part of Ukraine. She grew up in a dysfunctional family and, after her parents' separation, was shuffled between boarding schools, foster homes and relatives. Her emotional distress caused her to rebel against authority as a way of gaining attention. A precocious child, she was playing the violin by age seven. As a teenager she began to pursue an interest in the theatre and took acting lessons at the Moscow-based of before joining Stanislavsky's Moscow Art Theater as "Alla Nazimova", and later just "Nazimova". She married Sergei Golovin, a fellow actor, in 1899, but the marriage soon fell apart.

Nazimova's theater career blossomed early and by 1903 she was a major star in and Saint Petersburg. She toured Europe, including London and Berlin with her alleged boyfriend Pavel Orlenev, a flamboyant actor and producer. In 1905 they moved to New York City and founded a Russian language theater on the Lower East Side. The venture was unsuccessful and Orlenev returned to while Nazimova stayed in .

She was signed up by the American producer Henry Miller and made her Broadway debut in 1906 to critical and popular success. She quickly became extremely popular (a theather was named after her) and remained a major Broadwar star for years, often acting in Henrik Ibsen's and Anton Chekhov's plays.

Nazimova made her silent film debut in 1916. Over the next few years she made a number of highly successful films that earned her a considerable amount of money.

In 1918, at age 39, Nazimova felt confident enough in her abilities that she began producing and writing films in which she also starred. In her adaptations of works by such notable playwrights as Oscar Wilde and Henrik Ibsen she developed her own filmmaking techniques, which were considered daring at the time. Her projects, however, met with little popular success and lost a great deal of money.

By 1925 she could no longer afford to invest in more films and financial backers withdrew their support. Left with few options, she gave up on the film industry, returning to perform on Broadway until the early 1940s when she appeared in a few more films, presumably in need of money.

By this time (between the years of 1917 and 1921), Nazimova wielded considerable influence in . By all accounts she was extremely generous to young actresses in whom she saw talent, and became involved with at least some of them sexually.

She helped start the careers of both of Rudolph Valentino's wives, Jean Acker and Natacha Rambova; she was involved with Acker sexually and may also have had an affair with Rambova. She was very impressed by Rambova's skills as an art director, and Rambova designed the innovative sets for Nazimova's productions of Camille and Salome. After meeting a young Patsy Ruth Miller at a party, Nazimova assisted in getting Miller's career launched. Nazimova was briefly involved with actress June Marlowe, whom she later introduced to producer/director Lloyd Hamilton. She also helped the career of young actress Tallulah Bankhead after a brief affair. Nazimova was named by Charlie Chaplin in his 1920 divorce decree as his wife Mildred Harris' lesbian lover.

It was not only young talent Nazimova concentrated on. She also was involved in a brief fling with established actress Maude Adams, who allegedly broke off the affair due to her extreme sexual tastes. However, not all rumors regarding Nazimova are factual. For example, the rumor that she had an affair with Mata Hari has never been substantiated, and it has never been proven that the two women even met.

Although primarily a lesbian, Nazimova also had some affairs with men, for example cameraman Paul Ivano perhaps best known for his work with Erich Von Stroheim.

In order to cover up her sexuality, her studio insisted she live in a partnership of mutual convenience with Charles Bryant, a gay actor, for more than a dozen years. A friend of actress Edith Luckett and her extremely conservative husband, Dr. Loyal Davis, Nazimova was made godmother to former first lady Nancy Reagan, Luckett's daughter from a previous marriage, in 1921.

A breast cancer survivor, Nazimova died of coronary thrombosis at the age of 66 on July 13, 1945, in Los Angeles, California, and was interred in Forest Lawn Memorial Park Cemetery in Glendale, California.

Her contributions to the film industry have been recognized with a star on the Hollywood Walk of Fame.

Nazimova owned and lived in the famous Garden of Allah apartment complex in .

She was lesbian, and was involved romantically with many of 's elite women of the time.

"She realized later in life that her whole silent film career had been a great mistake."

GARDEN OF ALLA AT 8080 SUNSET BLVD 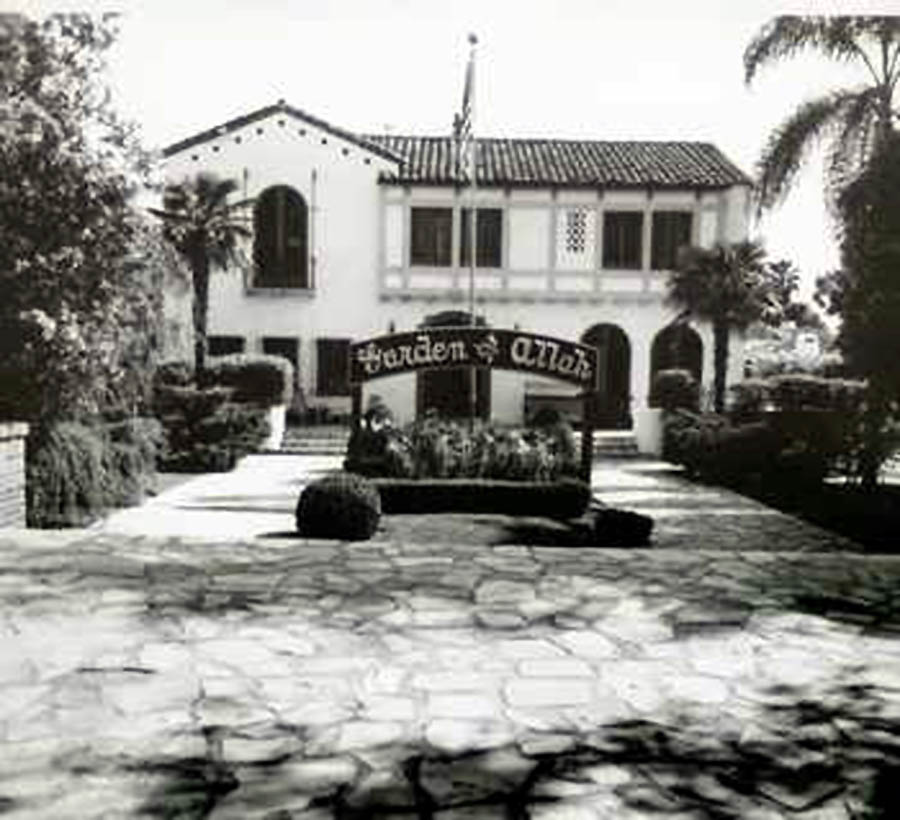 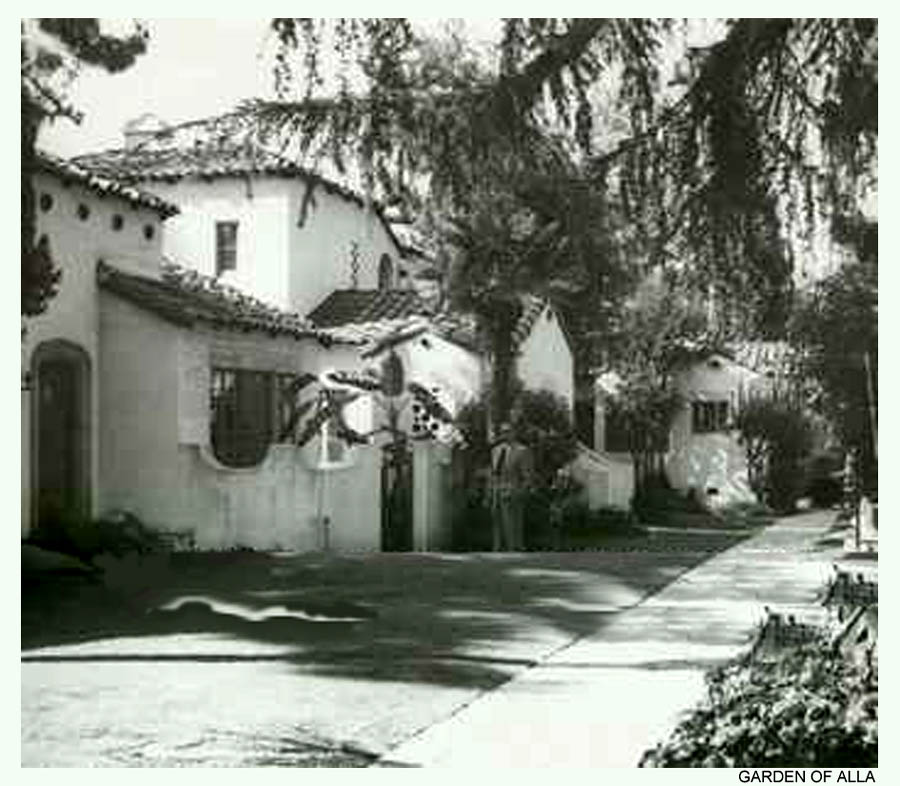 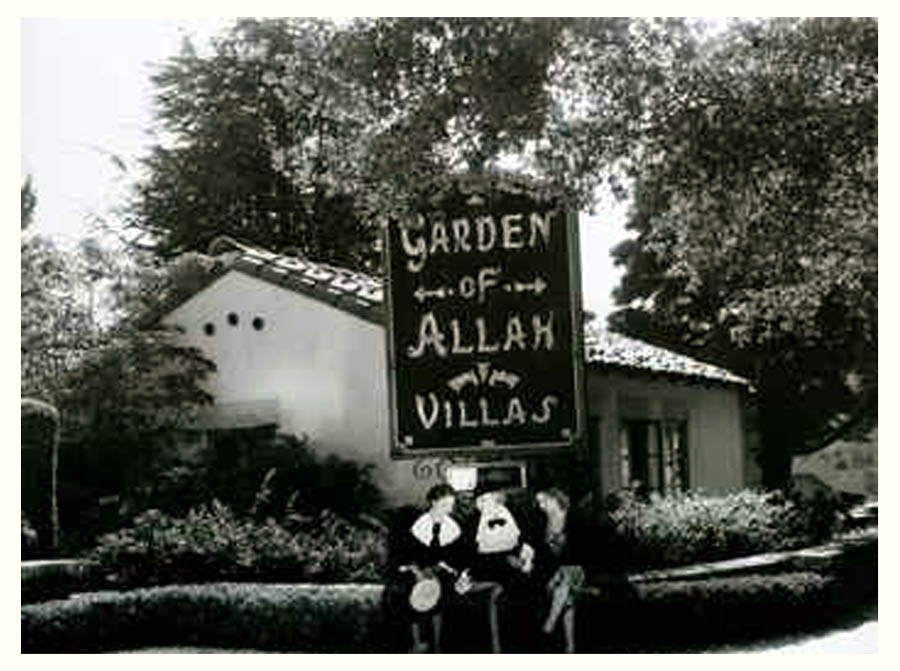 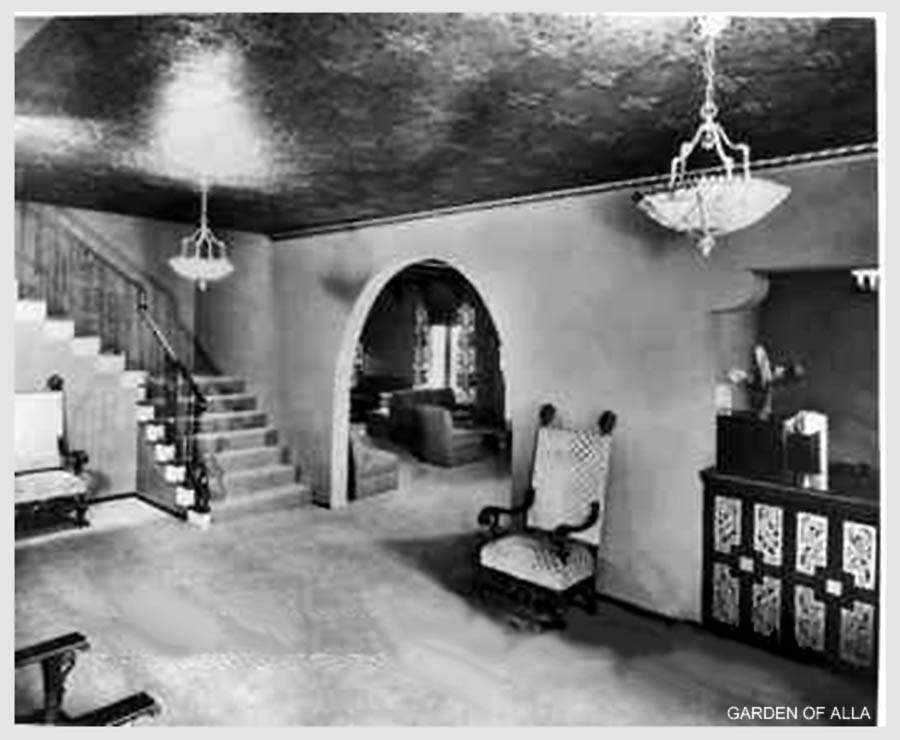 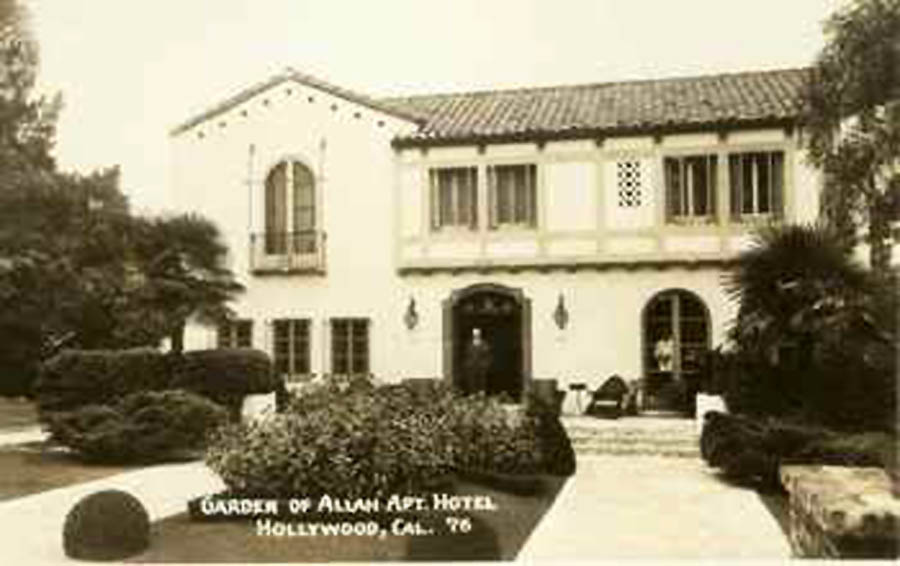 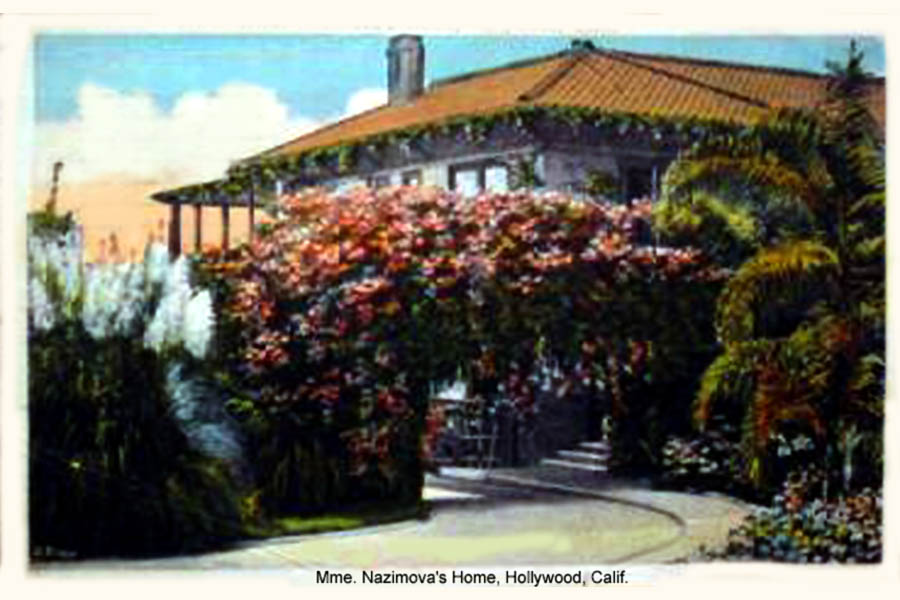 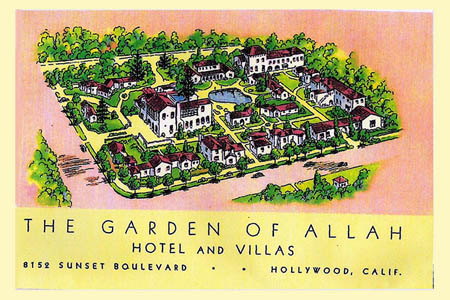 A gift from Delores Hanney 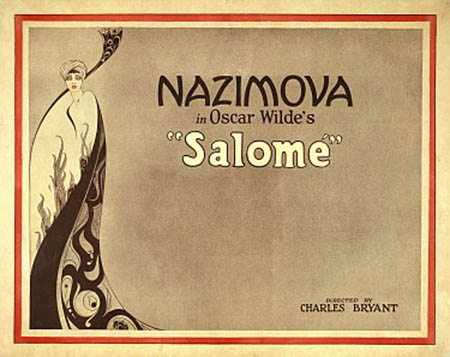 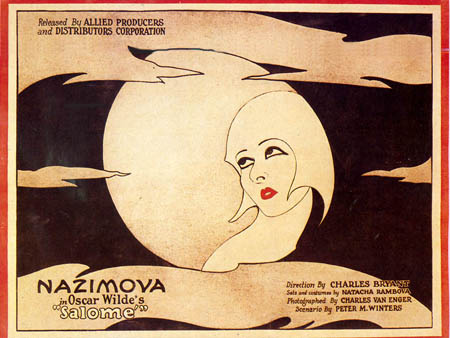 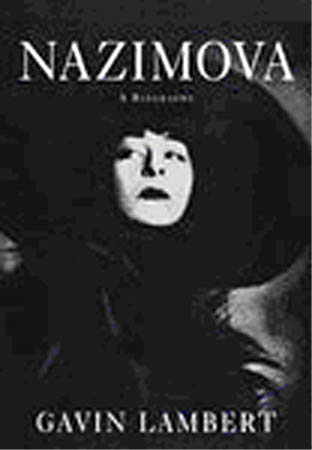 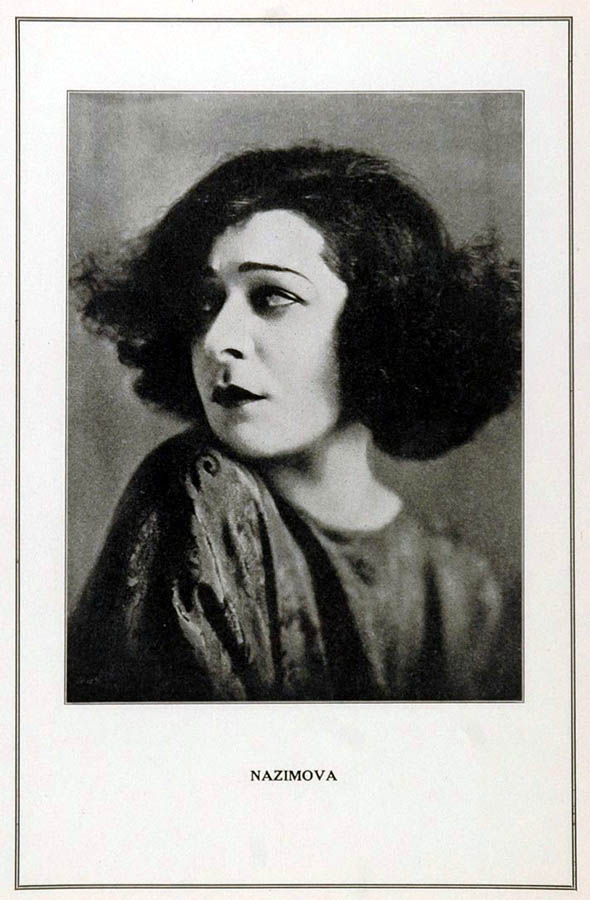 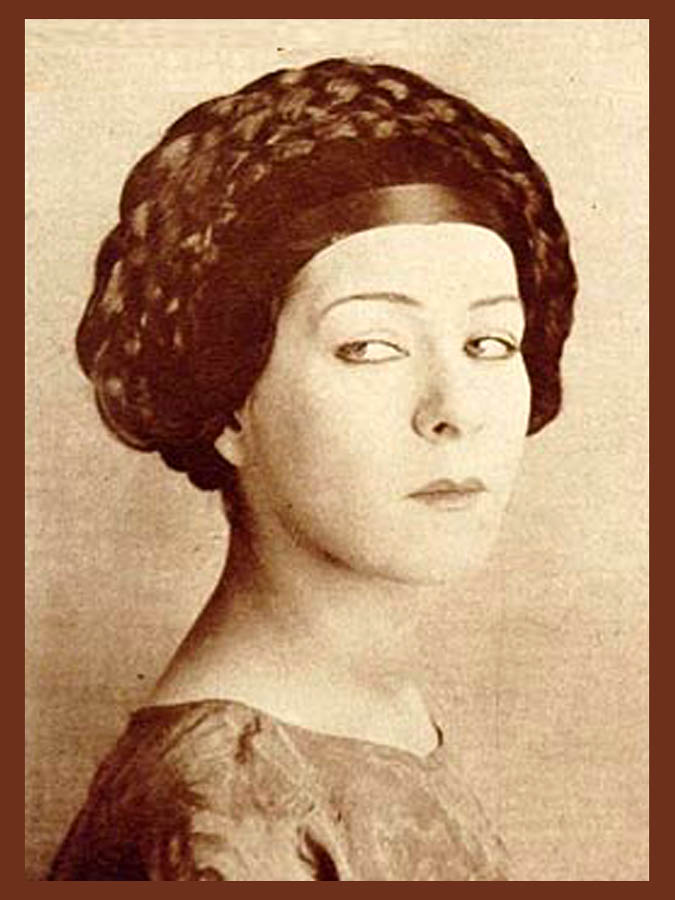 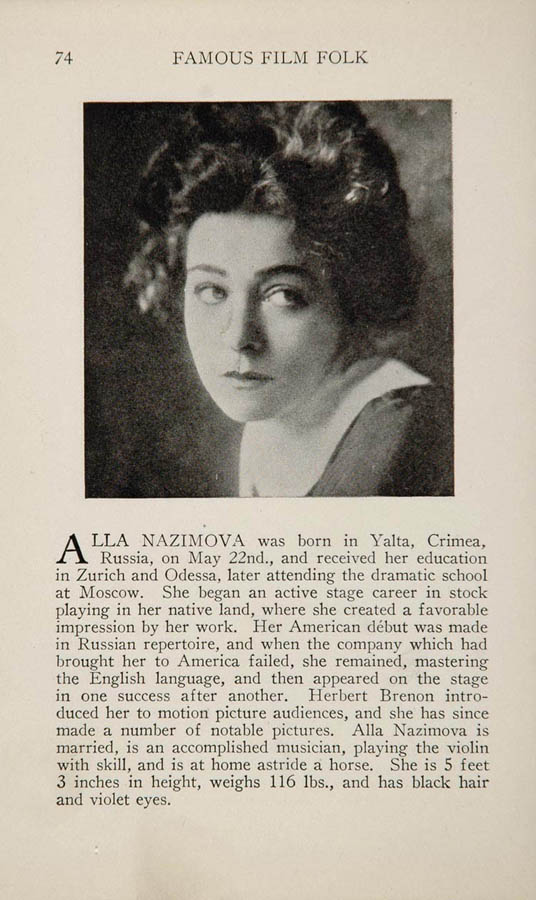 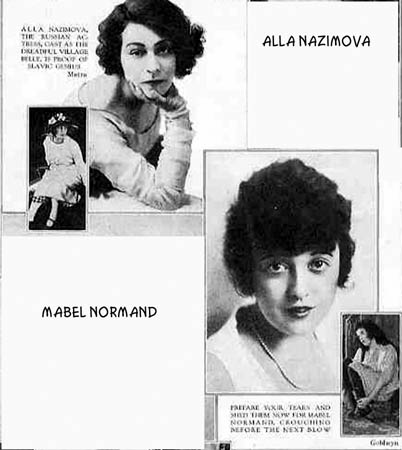 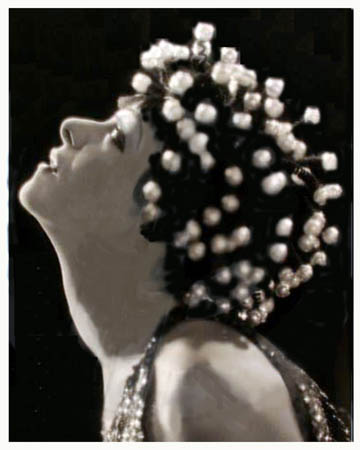 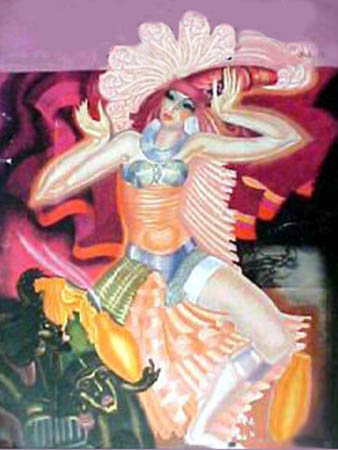 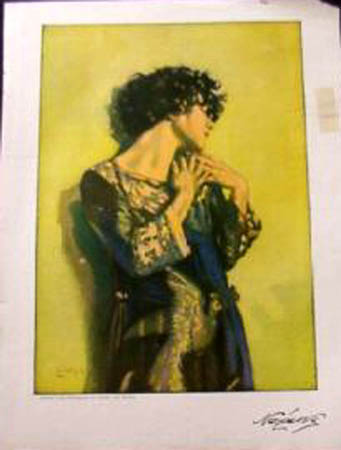 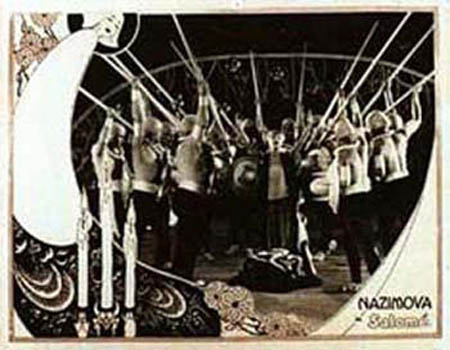