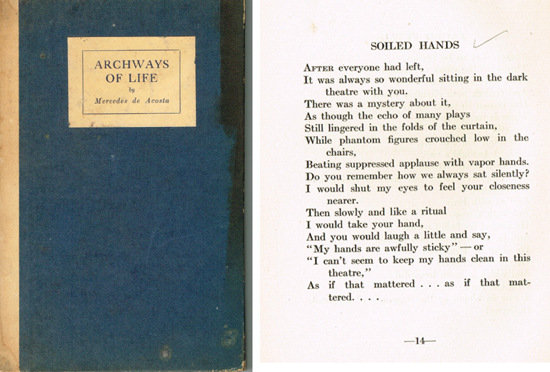 Recently a book from Mabel Normands library as surfaced titled Archways of Life. It was written by Mercedes deAcosta, that Furious Lesbian. Was there any connection between them? A book of poetry by Mercedes was not on the list of the probate books but it has a nice clear signature in the front and Mabels bookplate; inside the text are little checks by certain poems.  The marks could have been placed in the 1921 book by anyone, at anytime over the last 90 years and the book 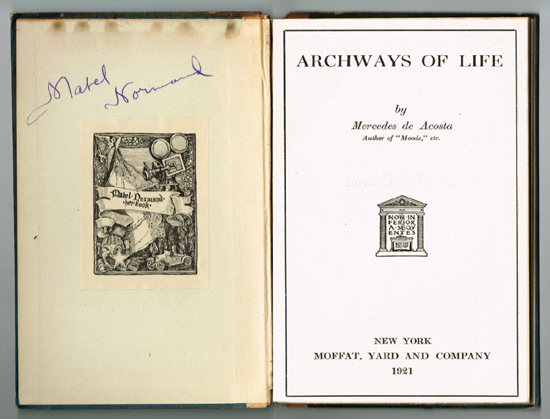 Robert Schanke has research and written extensively on Mercedes deAcosta but to be honest, I never heard of her until the book was listed on eBay.  There is so much to know, that I dont knowbut I love, just love finding out new stuffso what I have found is mostly from the writings of Robert Schanke

MERCEDES de ACOSTA was about the same age as Mabel Normand, also born in .  Mercedes family had come from ; she was attractive in that strong good bone way along with her sister, Rita Lydig, they would have met many of the artists that Mabel also knew. Rita (de Acosta)Lydig was very much part of the New York smart society; she modeled for artists like; Adolf de Meyer, Edward Steichen, and Gertrude Käsebier, sculpted in alabaster by Malvina Hoffman, and painted by Giovanni Boldini and John Singer Sargent.  In 1927 Rita, like her younger sister wrote a novel 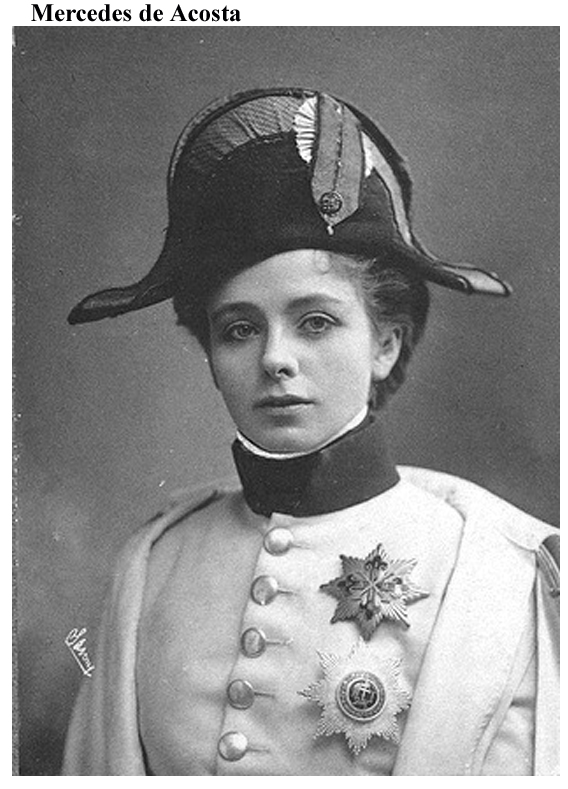 Tragic Mansions using the pen-name Mrs. Philip Lydig, it received a positive review in The New York Times. It was Ritas wardrobe that is the basis of the Costume Institute at the Metropolitan Museum of Art.

Mercedes mother was Micaela Hernandez de Alba y de Alba, who came to when she was just 14 and her father was Ricardo de Acosta, who had migrated from to and later to where they met and married.   The wealthy family lived on , between Fifth and Sixth Avenues, among their neighbors were former President Theodore Roosevelt, and the William Vanderbilts. There were six children Mercedes, Aida, Ricardo Jr., Angela, Maria, and Rita. The de Acosta children attended school at the Covenant of the Blessed Sacrament on in with Dorothy Parker.  Mercedes sister, Maria married A. Robeson Sargent, son of the famous, Charles Sprague Sargent.

At one point Mercedes married painter Abram Poole. They were married in 1920 and divorced in 1935 but she was a known lesbian before, during and after her marriage.  It has been reported that in 1916 she began an affair with actress Alla Nazimova.

.Alice B. Toklas once said that say what you will about Mercedes, shes had the most important women in the twentieth century.

Mercedes dead in 1968 never completely recovering after a 1961 brain surgery, which she paid for by her selling her fabulous collection of jewelry. She lived her last years in a small apartment in with little money.  She is buried at in .

There is only one credit on IMDb for Mercedes, RASPUTIN AND THE EMPRESS (1932)  but is listed as uncredited, it maybe she should have more credits.  She came to in 1931 but to most people it was not her work in that was important but the people she knew. 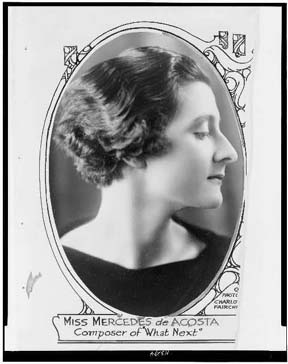 In her 1960 memoir titled "Here Lies the Heart" she told a few stories but was not specific about affairs with movie stars and there were more stories told by others. A number of her friends thought she had outed them by writing that she was their friend as she was known to be a lesbian.  She was more than a lesbian with affairs with beautiful women she was a published author of several plays that were produced and perhaps a novel and three or four volumes of poetry, including Archways of Life.

She was said to have had affairs with Greta Garbo, Marlene Dietrich, Isadora Duncan, and Tallulah Bankhead among others.  Marlene Dietrich had nice things to say about Mercedes memoir but Greta Garbo never forgave her. Once on a street in , Greta snubbed Mercedes publicly and even when Mercedes was dying Greta would not go and see her. However even when Mercedes needed cash during the last years of her life and people would have paid huge money for the letters from Greta, Mercedes didnt sell them but rather in her Will she donated them to the Rosenbach Museum on condition that they would not become public until 10 years after Greta Garbos death (after 2000).  In a number of Greta Garbo biographies Mercedes is described as a "notorious lesbian, dishonest nuisance, a stalker of Garbo. 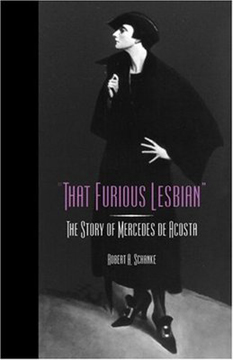 The last poem Mercedes de Acosta wrote for Garbo was in 1944.

You belong to me.  Some things just belong to other things;

There is no other way. Why not let us then say,

The Stonewall riots in in 1969, a year after her death, were a catalyst in creating a new interest in lesbian history, Mercedes book "Here Lies the Heart" was reprinted and enjoyed success, it didnt have during her life time making Mercedes a well known name within the movement.