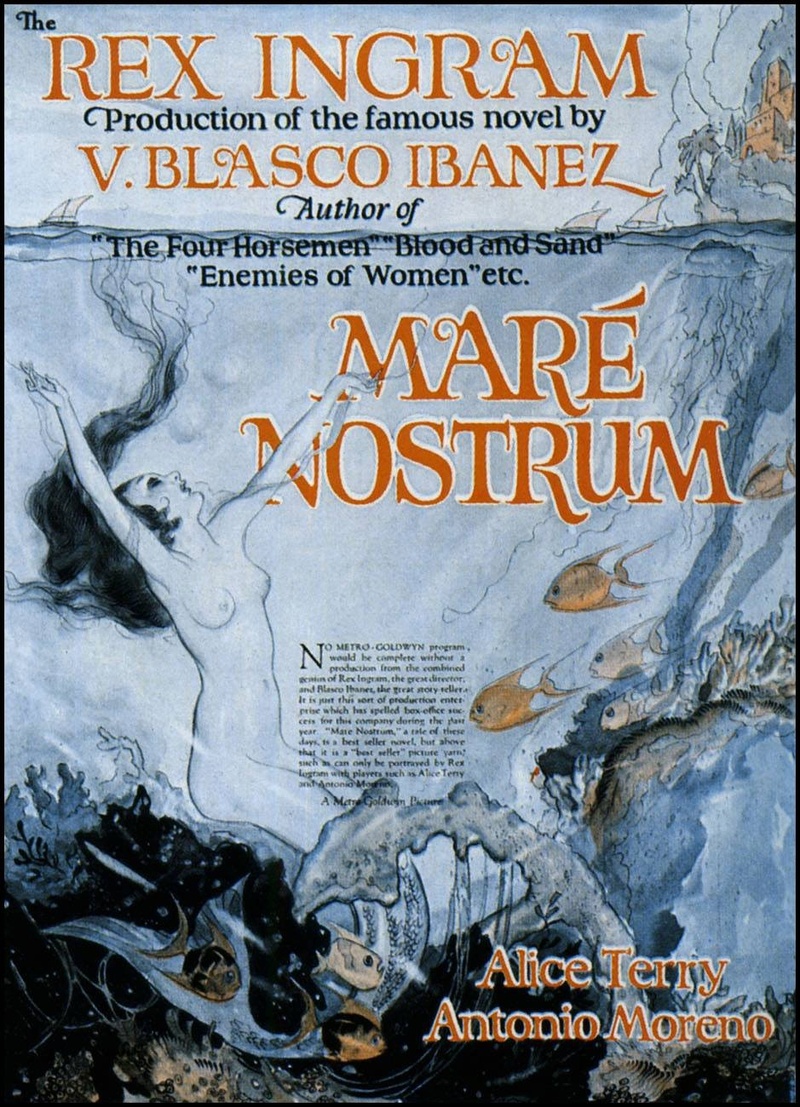 Patrick Stanbury and Kevin Brownlow are looking for the footage of the octopus sequence to complete the restoration of Rex Ingrams 1926 film adaptation of Vicente Blasco Ibanez novel.  In the program created for Cinecon 49 (2013) Robert Birchard wrote an excellent review of this lesser known Ingram film.  As he stated Mare Nostrum has never received the recognition that accompanied Ibanezs The Four Horsemen of the Apocalypse or Blood and Sand, vehicles of Rudolph Valentino or The Torrent and The Temptress with the glorious Greta Garbo received.

The imagery swipe me away, the symbolism, the metaphoric tale that echoes a Greek Tragedy it was storytelling at the finest. I am not alone, in my feelings about this brilliant movie, obviously hundreds of people sat in the Egyptian Theatre, Saturday August 31, 2013 in Hollywood in awe of what was on the screen, I hope; if Kevin Brownlow is doing a restoration even more people will understand why this movie counts.

The initial reaction must have disappointed Rex Ingram. Antonio Moreno, Ulysses(Odysseus)Farragut, the descendent of seafarers on the Mediterranean reaching back into antiquity; was taught as a child of the special relationship the Farragut men have had with the sea and Aphrodite. She was born when Cronus cut off the sex organs of his father, Uranus, and threw them into the sea. Aphrodite emerged from the foam. At the core mirrored in the tale of Mare Nostrum, is the story of Ulysses (Odysseus) being tricked by Palamedes, the grandson of Posedon into joining the expedition against .

The portrait of the goddess captured Ulysses as a boy as it had done his grandfather.

Captain Ulysses loves the sea, his ship, his son in that order.  His wife was only the product of an arranged marriage that nagged him to leave the sea and live on land for his son.   There is a coldness in Ulysses that bespeaks a passion not woken.  The day comes in the ruins of he walks alone and sees the portrait of Aphrodite walking towards him in the form of a German tourist named Freya Talberg (Alice Terry).  She is as aloof as a goddess.  The complexity of their relationship is what great stories are made of.

To say that the movie didnt connect with the 1926 audiences falls short of the dreadful reviews the movie received at the time of its preview. In one review the octopus sequence is panned and in another it is praised. 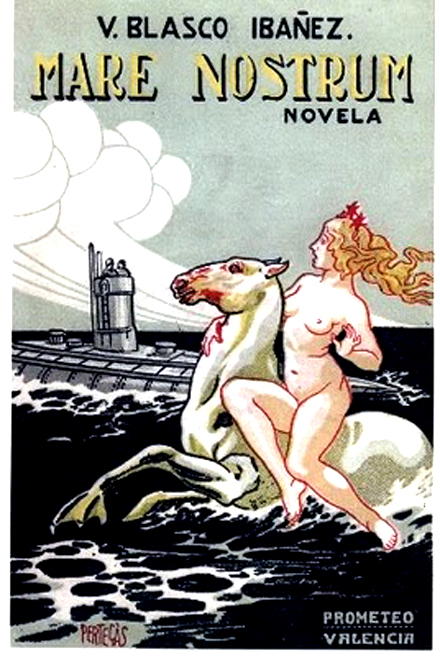 At one of the most brilliant first nights of the year Rex Ingrams picturization of the famous Blasco Ibanez novel, mare Nostrum, with Alice Terry and Antonio Moreno in the leading roles had its premiere at the Criterion theatre, , Monday evening February 15.  A distinguished first night audience was present.  Motion Picture NEWS Booking Guide, 1926

Mare Nostrum (Our Sea) is a war picture.  That cleans up any doubt as to the meaning of the title and the nature of the story.  Its war stuff from a navel angle and not too potent in the telling at this day and date.  As a $2 special-run picture it doesnt suffice, but as a program leader it can be cut to adequately meet such an assignment.  There can be no doubt that of Metro-Goldwyns quartet of specials now on Broadway this one is by far the weakest. 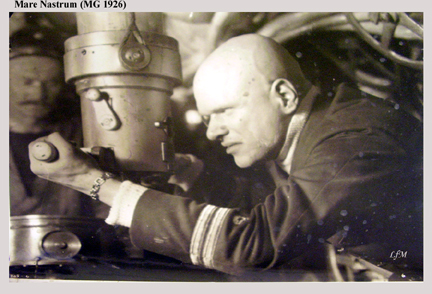 Ibanez, the author and a Spaniard has taken late upheaval of the world and woven a tale from his 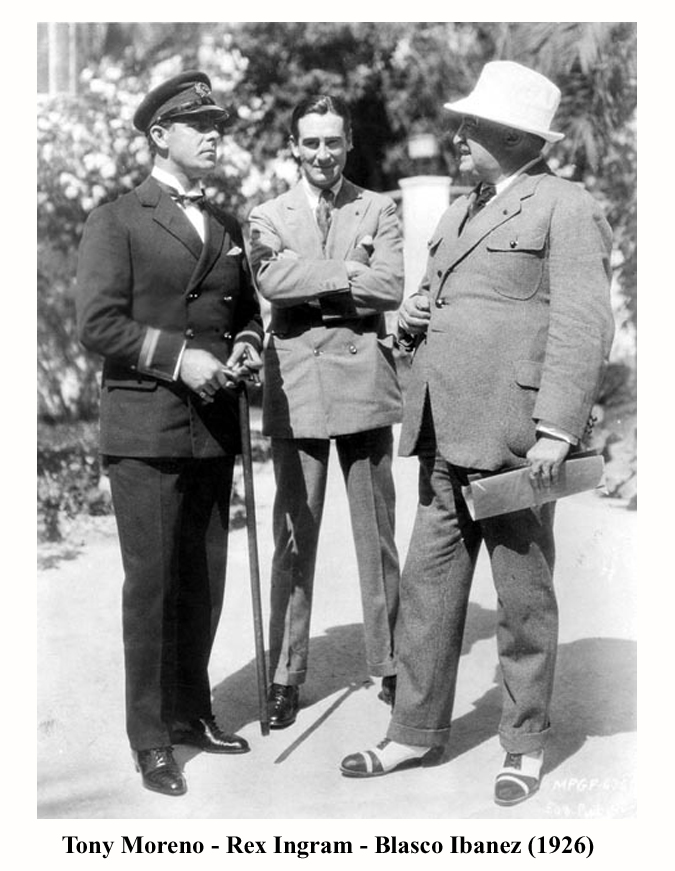 countrys viewpoint.  was a neutral nation.  The picture may interest them on the native soil of the writer but theres been too much war stuff here and abroad, and what was left on these shores the Big Parade has used up.  Theres not a chance of Mare Nostrum ever being shown in because of the manner in which is presented that countrys submarine warfare.  And the torpedoing of two ships (miniatures and in slow photography is this films kick.

Mare Nostrum was a book so there  is always a possibility it will draw the readers; but those viewing it with no memories and an open mind are unable to find in the story many uninteresting passages plus the handicap of not a single principal character either demanding or holding sympathy.  Thus almost immediately the love interest is debatable, inasmuch as the woman in the case.  Freya (Miss Terry) is a German spy, and the man Ulysses (Mr. Moreno), a Spanish sea captain who deserts his home for her.

Freya dies before a firing squad (well pictured) and Ulysses meets his end at the hands of a German submarine which he in turn sinks with a parting shot from a deck gun just before his ship takes its final plunge.

Previously his young son has been drowned as a result of another undersea attack, so its one of those things where everybody dies.  An offset to this melancholy finish is made through an underwater phantasy to show the leads alive as a climax.

Thats the Ibanez novel as it shapes up in scenario form, and the construction isnt strong enough to sustain it by itself at $2 as a road senilities in limited capacity houses if the film is cut.

Ingram remained abroad a long time to make this one, and few will deny that he has turned out a picturesque gem.  , , ,  theyre all there in the Flesh, and its pretty work.  But landscapes cant and dont make a picture which runs just five minutes short of two hours in actual reelage.  Much can come out, and it may then project itself as a better vehicle.  However, as it stands it must be taken and under such a stipulation its unquestionably draggy and inclined to establish a disinterested morale on the part of the viewers.

Ingram has allowed his sense of the dramatic to run rampant at times.  The outcome is some heavily stressed scenes that seemed a throwback to the early screen war deportment of the enemy which drew snickers from this first night gathering.  Besides which its a gruesome tale without a solid laugh during the entire telling.  The submarine tangent of the picture holds, especially the view of the inner mechanics.  And even if the sinking are models the manner in which the action leading up to these tragedies has been woven possesses its points.  But thats down in the last half hour and its a long time arriving. 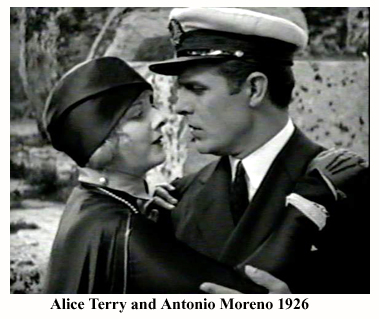 Miss Terry and Mr. Moreno give capable performances, despite their unsympathetic roles.  Early shots of Miss Terry, supposedly revealing and gloating in the aquarium victories of a devil fish to gain its food, as an insight on her mentality, looked to be about the best piece of symbolism Ingram has turned in as well as marking Miss Terrys histrionic high mark.  The Tale is gruesome enough, but the director has further implied that atmosphere by lizards, snakes and other species of reptile.  gives a standard performance all the way, and if you dont particularly care what becomes of him, still, you cant blame him for that. 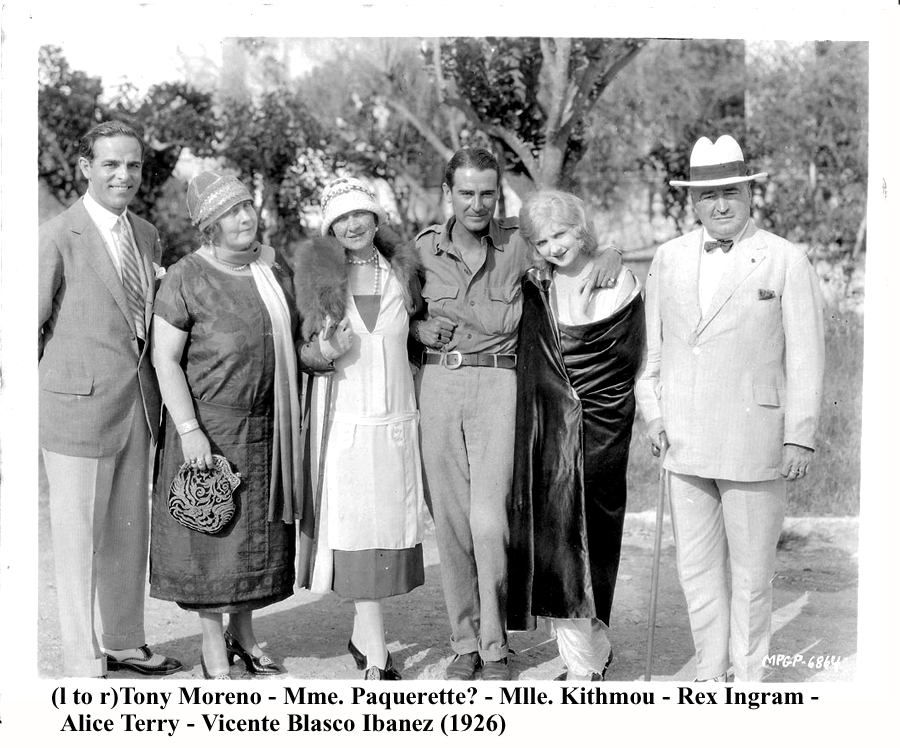 A glance over the cast will reveal that the rest of the players are practically all foreigners some being types  Michael Brantford, a youngster, makes the part of Morenos son stand out for full worth, while Mlle. Kithnou convinces as the deserted wife and mother who hates the sea because it is destroying her family.  So prominent is she that what pathos there is in the picture is obtained by this girl despite the story has her as a most plain and unattractive woman.

Mme. Parquerette plunges through the role of the masculine but feminine head of a branch of the spy system, and Fernand Mailly and Andre von Engelman are genuine enough as the German officers.  Hughie Mack, an elephantine fat man, is evidently the comedy relief potion but does nothing.  Uni Apollon impresses in the prolog to the main theme.

Ingram did plenty with another Ibanez story, The Four Horsemen, but the combination is not as happy a one in this instance although its not entirely Ingrams fault.  The story just doesnt seem to be there for American consumption.  It may do for the Latin countries, especially in the those localities which are seen on the screen but the tale hints at being too localized and of too unsympathetic characters to establish itself as screen fare rating for a house unto itself over here. 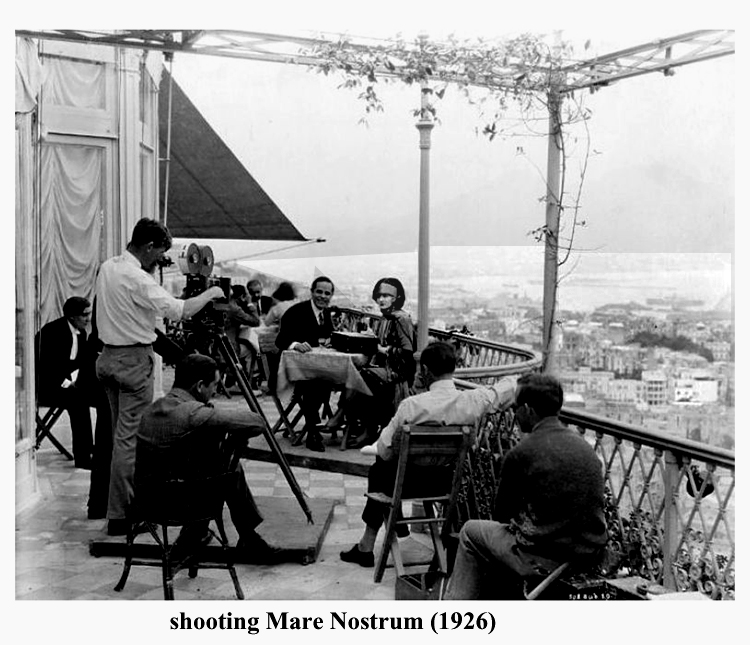 Another thing is that Ingram has been away from these shores a long time.  It wouldnt do him any harm to take a jaunt back here if for nothing else than to sit around, talk with the boys and glance over what theyre doing in picture work.  Some of the footage here reveals that absence in Ingrams work.  Film Reviews, VARIETY, February 17, 1926. 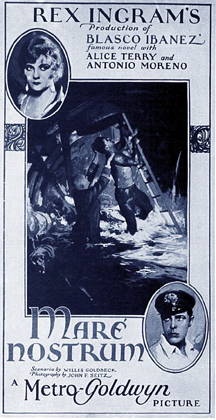 Rex Ingrams picture, Mare Nostrum, had a cold premiere in and the wise-guys checked it up as a flop.  Mr. Ingrams visit to hasnt done him a great deal of good.  For one thing, he has taken the most unpleasant features of the Continental films and Mare Nostrum will have a disagreeable flavor to most audiences.

The principal love scene, for instance, is filmed in an aquarium.  While Alice Terry and Tony Moreno declare their love, you see in the background an octopus eating small crabs.  The scene runs interminably and it is one of the most annoying we ever have witnessed.

Furthermore, has the worlds most thankless part.  He plays the role of a Spanish sea captain whose son is killed when a German submarine torpedoes a Mediterranean liner. When hears of the boys death, he falls flat in a faint, which is hardly in sort of reaction that gets sympathy for a hero.

However, Mare Nostrum will not have the failure that was predicted for it.  In spite of the fact that it was coldly received, it has been doing good business in .  Why?  Simply because there is a large Italian and Spanish population which is intensely interested in it - Review Agnes Smith, Motion Picture Magazine; February 1926. 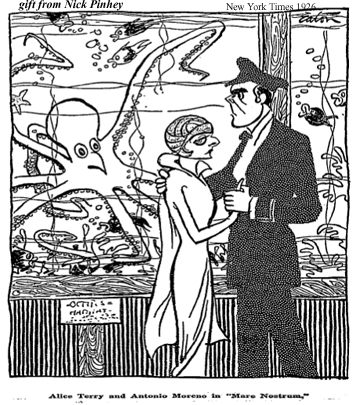