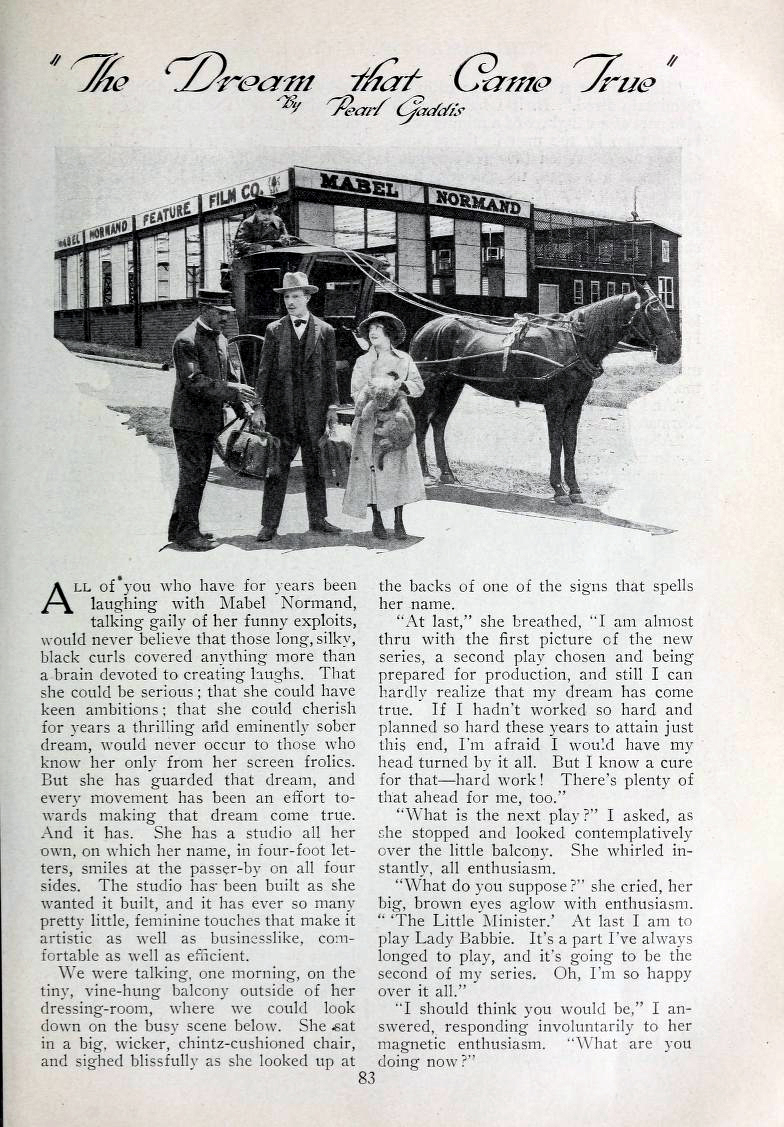 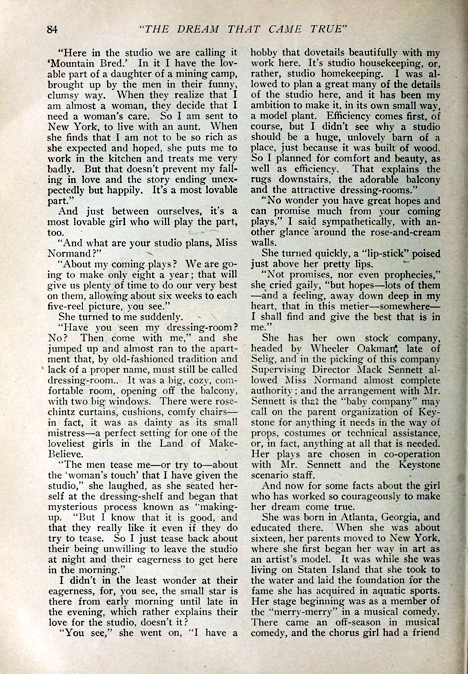 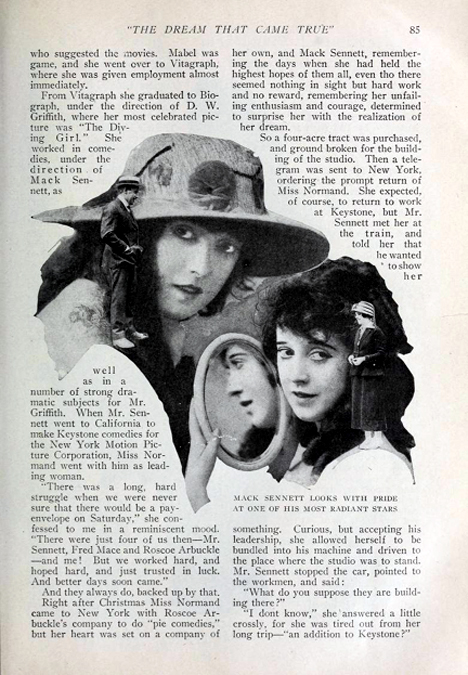 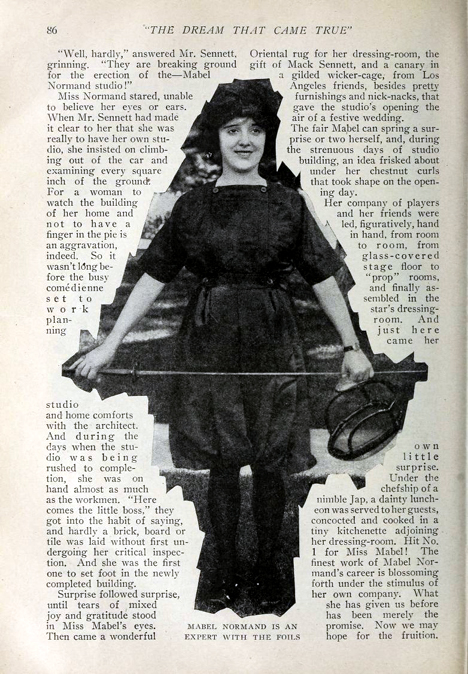 a gift from John Armijo, EDD

The Dream That Came True

All of you who have for years been laughing with Mabel Normand, talking gaily of her funny exploits, would never believe that those long, silky, black curls covered anything more than a brain devoted to creating laughs. That she could be serious; that she could have keen ambitions; that she could cherish for years a thrilling and eminently sober dream, would never occur to those who know her only from her screen frolics. But she has guarded that dream, and every moment has been in effort towards making that dream come true. And it has. She has a studio all her own, on which her name, in four foot letters, smiles at the passerby on all four sides. The studio has been built as she wanted it built, and it has ever so many pretty little feminine touches that make it artistic as well as businesslike, comfortable as well as efficient.

We were talking one morning, on the tiny, vine-hung balcony outside of her dressing room, where we could look down on the busy scene below. She sat in a big, wicker chintz-cushioned chair, and sighed blissfully as she looked up at the backs of one of the signs that spells her name.

At last, she breathed, I am almost thru with the first picture of the new series, a second play chosen and being prepared for production, and still I can hardly realize that my dream has come true. If I hadn't worked so hard and planned so hard these years to attain just this end, I'm afraid I would have my head turned by it all. But I know a cure for that -- hard work! There's plenty of that ahead for me too.

What is the next play? I asked as she stopped and looked contemplatively over the little balcony. She whirled instantly, all enthusiasm.

What do you suppose? she cried, her big brown eyes aglow with enthusiasm. The Little Minister.  At last I am to play Lady Babbie. It's a part I've always longed to play, and it's going to be the second of my series. Oh, I'm so happy over it all.

I should think you would be, I answered, responding involuntarily to her magnetic enthusiasm. What are you doing now?

Here in the studio we are calling it Mountain Bred In it I have the lovable part of a daughter of a mining camp, brought up by the men in their funny, clumsy way. When they realize that I'm almost a woman, they decide that I need a woman's care. So I am sent to to live with my aunt. When she finds that I am not as so rich as she expected and hope, she puts me to work in the kitchen and treats me very badly. But that doesn't prevent my falling in love and the story ending unexpectedly but happy. It's a most lovable part.

And just between ourselves, it's a most lovable girl who will play the part, too.

And what about your studio plans, Miss Normand?

About my coming plays? We are going to make only eight a year; that will give us plenty of time to do our very best on them, allowing about six weeks to each five-reel picture, you see.

She turned to me suddenly.

Have you seen my dressing room? No? Then come with me, and she jumped up and almost ran to the apartment that, by old-fashioned tradition and lack of a proper name must still be called a dressing room. It was a big, cozy, comfortable room, opening off a balcony, with two big windows. There were rose-chintz curtains, cushions, comfy chairs -- in fact; it was as dainty as its small mistress -- a perfect setting for one of the loveliest girls in the .

The men tease me -- or try -- to about the woman's touch that I have given the studio, she laughed, as she seated herself at the dressing shelf and began that mysterious process known as making up, But I know that it is good, and that they really like it even if they do try to tease. So I just tease back about their being unwilling to leave the studio at night and their eagerness to get here in the morning.

I didn't in the least wonder about their eagerness, for, you see, the small star is there from early morning until late in the evening, which rather explains their love for the studio, doesn't it?

You see, she went on, I have a hobby that dovetails beautifully with my work here. It's studio housekeeping, or rather studio homekeeping. I was allowed to plan a great many of the details of the studio here, and it has been my ambition to make it in its own small way a model plant. Efficiency comes first, of course, but I didn't see why a studio should be a huge, unlovely barn of a place, just because it was built of wood. So I planned for comfort and beauty, as well as efficiency. That explains the rugs downstairs, the adorable balcony and the attractive dressing rooms.

No wonder you have great hopes and can promise much from your coming plays. I said sympathetically, with another glance around the rose-and-cream walls.

She turned quickly, a lip-stick poised just above her pretty lips.

Not promises, nor even prophecies, she cried gaily, but hopes -- lots of them -- and a feeling, away deep down deep in my heart, that in this métier  somewhere -- I shall find and give the best that is in me.

She has her own stock company, headed by Wheeler Oakman, late of Selig, and in the picking of this company Supervising Director Mack Sennett allowed Miss Normand almost complete authority; and the arrangement with Mr. Sennett is that the baby company may call on the parent organization of Keystone for anything it needs in the way of props, costumes or technical assistance, or in fact, anything at all that is needed. Her plays are chosen in co-operation with Mr. Sennett and the Keystone scenario staff.

And now for some facts about the girl who has worked so courageously to make her dream come true.

She was born in , and educated there. When she was about sixteen, her parents moved to , where she first began her way in an art as an artist's model. It was while she was living on that she took to the water and laid the foundation for the fame she has acquired in aquatic sports. Her stage beginning was as a member of the merry-merry in a musical comedy. There came an off season in musical comedy, and the chorus girl had a friend who suggested the movies. Mabel was game, and she went over to Vitagraph, where she was given employment almost immediately.

From Vitagraph she graduated to Biograph, under the direction of D. W. Griffith, where her most celebrated picture was The Diving Girl. She worked in comedies, under the direction of Mack Sennett, as well as in a number of strong dramatic subjects for Mr. Griffith. When Mr. Sennett went to to make Keystone comedies for the New York Motion Picture Corporation, Miss Normand went with him as leading woman.

There was a long hard struggle when we were never sure that there would be a pay-envelope on Saturday, she confessed to me in a reticent mood. There were just four of us then -- Mr. Sennett, Fred Mace, and Roscoe Arbuckle -- and me! But we worked hard, and hoped hard, and just trusted in luck. And better days soon came.

As they always do, backed up by that.

Right after Christmas, Miss Normand came to New York with Roscoe Arbuckle's company to do pie comedies, but her heart was set on a company of her own, and Mack Sennett, remembering the days when she had held the highest hope of them all, even though there seemed nothing in sight but hard work and no reward, remembering her unfailing enthusiasm and courage, determined to surprise her with the realization of her dream.

Sennett (in appreciation of her hard work and hopes) purchased a four-acre tract and ground broken for building of the studio. Then a telegram was sent to ordering prompt return of Miss Normand.  She expected of course to return to work at Keystone, but Mr. Sennett met her at the train and told her that he wanted to show her something. Curious, but accepting his leadership, she allowed herself to be bundled into his machine and driven to the place where the studio was to stand. Mr. Sennett stopped the car, pointed to the workmen and said:

What do you suppose they are building there?

I don't know, she answered a little crossly, for she was tired out from her long trip -- an addition to Keystone?

Well hardly, answered Mr. Sennett grinning. They are breaking ground for the erection of the -- Mabel Normand Studio!

Miss Normand stared, unable to believe her eyes or ears. When Mr. Sennett had made it clear to her that she was really to have her own studio, she insisted on climbing out of the car and examining every square inch of the ground. For a woman to watch the building of her home and not to have a finger in the pie is an aggravation indeed. So it wasn't long before the busy comedienne set to work planning studio and home comforts with the architect. And during the days when the studio was being rushed to completion, she was on hand almost as much as the workmen. Here comes the little boss, they got into the habit of saying, and hardly a brick, board or tile was laid without first undergoing her critical inspection. And she was the first one to set foot in the newly completed building.

Surprise followed surprise, until tears of mixed joy and gratitude stood in Miss Mabel's eyes. Then came a wonderful Oriental rug for her dressing room, the gift of Mack Sennett and a canary in a gilded bird cage, from friends, besides pretty furnishings and nick-nacks, that gave the studio opening the air of a festive wedding.

The fair Mabel can spring a surprise or two herself, and during the strenuous days of studio building, an idea frisked about under her chestnut curls that took shape on the opening day.

Her company of players and her friends were led, figuratively, hand-in-hand, from room to room, from glass covered stage to prop rooms, and finally assembled in the star's dressing room. And just here came her own little surprise. Under the chefship of a nimble Jap, a dainty luncheon was served to her guests, concocted and cooked in a tiny kitchenette adjoining her dressing-room. Hit No.1 for Miss Mabel! The finest work of Mabel Normand's career is blossoming forth under the stimulus of her own company. What she has given us before has been merely the promise. Now we may hope for the fruition.

Mabel Normand Dream is for sale 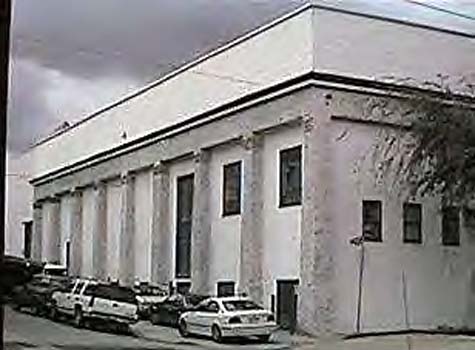 A Look Inside the Mabel Normand Studio (as it is now)