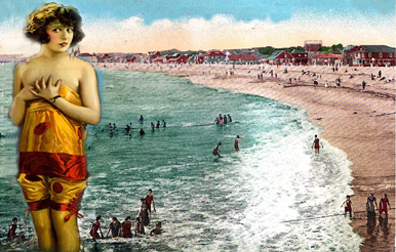 She was petite and pretty with a great mass of dark hair and large dark eyes, and from her tomboy days back on she was still athletic and agile.  For the summer months she maintained her own cottage in Venice, but during the rest of the year she scooted out each Sunday to swim in the Pacific and hang out with her silent film friends, Roscoe Fatty Arbuckle and his wife Minta Durfee, who had a home right down on the beach and spread Japanese tablecloths on the sand, around which their group would gather to picnic, chatter and cut-up.

One day, as Mabel was returning from her spin in the surf they could see there was something with her.  That something turned out to be a dolphin, which joined her as she swam back from the pier.  People didnt know much about dolphins in those days but our Mabel was fearless and simply flung her arm around it.  Every Sunday after that, for nearly a year, she and the dolphin paddled among the ocean waves together, as happily as a pair of sea otter sisters.  Then one Sunday it just stopped showing up.

Mabel Normand came to in 1912 to make ditzy movies in the sunshine in the company of her boyfriend Mack Sennett, head of the Keystone Film Company, and a squad of demented deliverers of thoroughly madcap mayhem.  In just the first year they created 140 short, lunatic laugh fests.

Mabel set the bar for slapstick finesse and zany comedienne antics, often expressed with an underlying quality of tenderness.   Due to her experience as an artists model rather than as a stage actress, she possessed an instinctual grasp of performing for the camera, keeping her movements subtle, or as subtle as a movement can be when conveying a good swift kick, pitching a pie in the face -- or receiving one.

With its beach, lagoon, canals, the amusement zone attractions and Mediterranean architecture, was a favorite all-purpose location for making movies.  Mabel was in several made here: The Water Nymph, Mabels New Hero, Fatty & Mabel Adrift and most importantly to film making history, Tillies Punctured Romance with Marie Dressler and Charlie Chaplin, the first feature-length comedy ever filmed.  Its wild wind-up was shot at the Abbot Kinney pier.

Though such sightings remain undocumented, as far as I can determine, its conceptually sound and you might presume with confidence that Mabel was repeatedly and gleefully whooshed about on s behemoth Race Through the Clouds rollercoaster. She DID keep a summer home here, remember, and she had a reputation as a thrill seeker. Equally, being a reckless connoisseur of speed, it is practically unthinkable that Mabel would have missed the Venice St. Patricks Day Grand Prix won by her buddy Barney Oldfield, with whom she made the movie Barney Oldfields Race for a Life a couple years before.

Mabel and Mack were definitely special guests at a surprise birthday event got up for cowboy film director Thomas Ince at the Venice Country Club.  Most of the 300 guests were from Inces own studio.  The affair consisted of a sumptuous banquet, dancing and impromptu entertainments, lasting till after

She was known to hang out, sometimes with Charlie Chaplin, at the classy Ship Café (a.k.a. the Cabrillo) where handsome waiters, fetchingly garbed as 16th-century Spanish naval officers, served up epicurean pleasures.  As dishy queen to Ince Studio star Barney Sherrys king, Mabel was radiant in a new frock at the head of the grand march opening a glitteracious Thanksgiving ball held at the Venice Dance Pavilion.

She was already familiar with tooling about in electriquettes from her making of movies at the Panama-California Exposition in and the Panama-Pacific International Exposition in , for which they were designed.  When the two-passenger motorized wicker chairs became available to rent for trundling up and down the promenade between Venice, Ocean Park and Santa Monica, Mabel -- this time in the company of aviator Walter Brookins  -- was tapped to demonstrate their use.  She was also employed in ads seen in the Venice Vanguard touting the availability of the jazzy new boardwalk transporters.

Not only was she a well-known habitué of , Mabel Normand and were really rather alike.  Both were famed, fun, lively, inimitable.  And both brought joy to thousands at a time.