F. Richard (Dick) Jones was a vital partner in Mabel Normand film career, which is not always recognized. In this short article taken from the 1916 Studio Directory on page 201, we find the beginning in the feature Pat becomes Mickey and the title of Studio Manager of Mabel Normand Feature Film Company belonged to F. Richard Jones.

When the Mabel Normand Film Company was organized Richard Jones was selected to serve as Studio Manager and director for the comedy  drama production starring the former Keystone girl and perhaps best known comedienne of the screen.

Studio Manager Jones received this promotion as the result of the very excellent work he had performed during the past four years he has been associated with Mr. Sennett, where Miss Normand learned of his work.  He has been engaged in work pertaining to the motion picture industry for six years, and the first two were in association with O. T. Crawford at .  When he came to the Keystone Mr. Jones became the personal aid of Mr. Sennett in the important work of cutting or editing the Keystone comedies which immediately made a name for Mr. Sennett.  After eighteen months in this work he was given a company and from that time until he went to his new position he served as Director, producing many of the most successful Keystone character comedies.

Since the Keystone became a part of the Triangle program Mr. Jones has produced several of the most successful.  His first release was that titled His (A) Game Old Knight, which had Charles Murray and Harry Booker as its stars.  Another of his big successes was that titled The Judge, with Harry Booker in the featured part, the name role.  Another success released recently was The Love Riot, with four of the best known Keystone players  Charles Murray, Louise Fazenda, Harry Booker and Alice Davenport in the featured parts.

Now Mr. Jones has been engaged in producing the first Mabel Normand comedy drama which will he completed shortly.  To date it is known under the title Pat, (Mickey) and the present plans provide that it shall consist of seven reels.  When released it is expected that it will create a sensation in the film world, because of the many novel features introduced and the exceptional work of the star.  This picture has many dramatic scenes for the world famous screen comedienne and Miss Normands best talent will be shown in this subject. 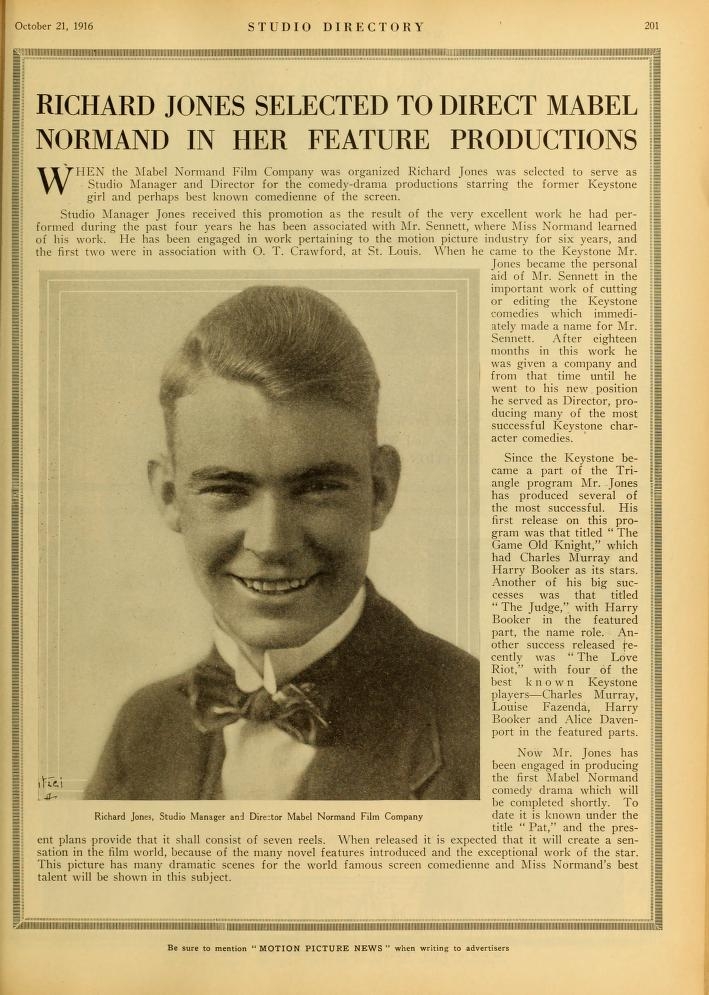