In the Motion Picture Studio Directory was a picture of Jean C. Havez listing him as a writer but I was familiar with him as a comedy song writer and a charter member of the American Society of Composers, Authors and Publishers (ASCAP); it was formed in 1914.  He died in 1925 of a heart attack, his name is on a lot of sheet music, which was all I know about him.  The 1921 Studio Directory identifies him as a scenario writer for Roscoe Arbuckle and Buster Keaton; when I posted the picture from the directory, a member of a Face Book group noted that he had worked for Hal Roach.  Was he perhaps someone Mabel Normand knew, while he was in ?

Robert Edwards wrote in 2004 that Jean came to in 1915 to create gags and infuse his delightful sense of the absurd into the productions of Hal Roach thus crafting silent screen comedy with what is considered some of its greatest moments .

I looked around and it doesnt look as if Jean and Mabel were at the same place at the same time but I found a group picture of Jean Havez with Buster Keaton and a group of the behind the camera guys; I dont recognize, all the boys in the amateur musical group but I have been told they include a Joe Mitchell playing the wagon wheel (not the New York Magazine  Joe Mitchell, the other one); and the guy with the megaphone is Tommy Grey, a gag writer; the director Eddie Cline and the wonderful cameraman, Elgin Lessley, the human pendulum.  What fun!

This information came our way from "JFK" a friend from NitrateVille and the wonderful Lisle Foote, who is working on the forthcoming book on "Keaton's Crew"

Jean Constant Havez was born in the day before Christmas in 1872.  Jean was named after his father, who had been born in ; his mother was from , they were both hairdressers before Jean Jr. was born; his mother was known as Madam Alice. His older brother was Herbert W. Havez, he had been born in 1865 and lived at home well into his 30s and worked as a bookkeeper and cashier in .  Jean Constant Havez, Sr., was employed as the Steward at the Maryland Club by 1873.

The city directory of , lists Jean as a reporter in 1896, which might seem more respectable than Tin Pan Alley lyricist; although his address in 1917 was the Friars Club, NY. Jean wrote the joyful and silly: "Darktown Poker Club" and "I'm Cured", for the great vaudevillian Bert Williams for the 1914 Ziegfeld Follies. Jean was married to Cecil Cunningham in 1915 they were divorced by 1917.

CECIL CUNNINGHAM (1888-1959) Cecil was married to Jean Havez for a relatively short period from 1915 to their divorce in 1917.  She came to Hollywood and made a career in the movies beginning in the 1930s after Jean died as a foghorn-voiced comedienne, who Hal Erickson explains was a success; portraying a mannish society matron or show-business divamanaging to draw attention to herself, usually through such simple expedients as a firmly planted tongue in cheek and a withering, all-knowing glare.

She was the brutally frank party hostess in Paramount on Parade (1930); as supercilious opera star Madame Swempski in the Marx Brothers' Monkey Business (1932); as a outraged dowager whose beauty treatment has left her totally bald in Kiss and Make Up (1934) and as Jack Benny's dry-witted secretary in Artists and Models (1937); and in If I Had a Million, with W. C. Fields as the haughty ex-trapeze artist;  in Leo McCarey's The Awful Truth, as waspish Aunt Patsy.

She began as a professionally trained operatic singer, first appearing in the chorus of a Fritzi Scheff musical, 'Mademoiselle Modiste' at the age of eighteen.  By 1911 she played an important part in Will o' the Wisp; her most successful role was in Pink Lady in 1913. She became a headliner in vaudeville at the Palace in during her marriage to Jean Havez.

The IMDb shows Jeans first work in the movies was in 1915 but in 1915 he was located in at Havez & (Fred) Block Amusements, at 130 West 45th  NY; and married to Cecil.  March 25, 1915, the Oakland Tribune ran a little story, which was a foreshadow of things to come, as Cecil Cunningham, the prima donna and newly wedded wife of Jean Havez, filed a voluntary petition in bankruptcy giving her liabilities as $2100 and assets as $60.  They had returned from their honeymoon just 2 days before.  Cecil had been given a silver loving cup at her debut in vaudeville at the Hammerstein by the Friars of which her husband was a member.

In 1917 Jeans address was the Friars Club New York, this may have been during his divorce; his draft registration card for 1918 is the city of Manhattan, New York, which might indicate that he didnt think of California as his home.

Jean that did the Lew Dockstader and His Famous Minstrels song about the famous Bull Durham Tobacco! And "Everybody Works but Father"; "When You Ain't Got No Money then You Needn't Come Around"; "I'm Looking For an Angel"; "Do Not Forget the Good Old Days"; "You're On the Right Road, Sister"; "He Cert'ny Was Good to Me"; etc

In the the newspapers were blaming accepting a position as a writer for the movies as the reason for the divorce; Cecil went before Justice Benedict in asking to end the marriage.  The newspaper said that Cecil was a marble bride according to Jean. And according to Cecil, Jean was lazy and she was tired of supporting him.

The Orange County Times-Press of June 18, 1918 included a small notice that Doris Vernon was Mrs. Jean Havez (Doris Vernon aka Ebba Ahl) By the summer of 1922, at the same time Mabel Normand was in Europe Jean, now nearing his 50th birthday was doing well enough for a vacation with his second wife, listed on the passenger list as Ella Ahl, just 27 years old. They traveled abroad the swanky liner Olympic and the Ambassador Hotel in as their address.

February 11, 1925, Jean dead of a heart attack at his home in Beverly Hills, and yet in August of that year his name was still important enough to be included in the graphic advertisements for Buster Keatons Seven Chances.  His interment is at , , Building A, Crypt 215.

and a little more info

That advert for Seven Chances at the end is interesting because it lists the names of so many of the women with cameos.  The list of seven names written on the envelope appearing in the includes Doris Deane, who is not named in the advert.  The six names with red dots are on the list.  Notice that Jean Arthur appears in the ad.  Rosalind Mooney was the hatcheck girl with the bob haircut and the attitude...John Bengtson

Here is a link to recordings of Havez's songs, as part of the Cylinder Preservation Project at UC Santa Barbara:
http://cylinders.library.ucsb.edu/search.php?queryType=@attr+1%3D1016+&query=havez
. 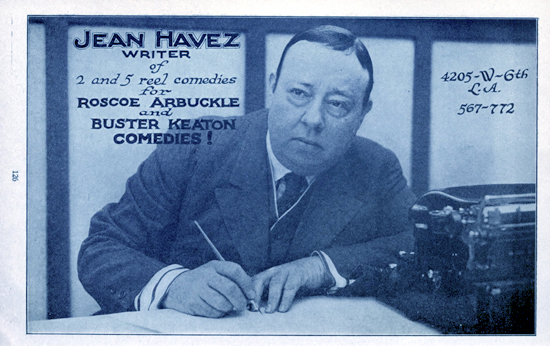 After Jean Havez died,  his widow Ebba Ahl (Doris Vernon) continued in Hollywood as a scenario writer; in a Los Angeles Times article dated August 27, 1933 sent by Lisle Foote,  Ebba and Edward Sedgwick took out a marriage license even with a picture no, I didnt know who Edward Sedgwick was or how he fit into film history I thought he was a marginal/little known director; so I turned to someone who might know about himthe film historian, William M. Drew; I wrote him about Jean Havezs widow wedding Edward Sedgwick, he sent us the following

Edward Sedgwick was hardly a marginal, little-known figure in film history. At MGM in the 1920s he was a prominent director of outstanding comedy features, many starring William Haines, which have been revived on TCM. He is best-known for his association with Buster Keaston which lasted throughout his five years at MGM, beginning with his work on "The Cameraman." He and Keaston were very close, so his marriage to the widow of one of Buster's friends and partners, Jean Havez, was certainly part of the continuity. Sedgwick's beautiful sisters, Josie and Eileen (they'd all been originally part of a family vaudeville act), were also leading actresses in films. The daring Eileen Sedgwick, indeed, became a famous serial queen at Universal in the '20s.

Lisle sent me the draft of her chapter on Jean Havez from her upcoming bookif you are interested in the CREW which surrounded Buster Keaston; this is a book, which will definitely fill in many of the gaps.