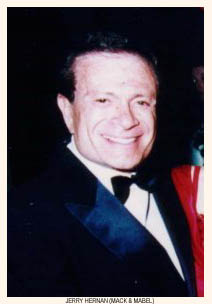 Jerry Herman burns a particular torch for his 1974 Broadway musical Mack and Mabel and who can blame him? The show may not be as well known as Hello, Dolly!, Mame, and La Cage Aux Folles, on whose tuneful output Herman's renowned is based. But its score is arguably even more awe-inspiring - melodic, heartfelt, and sometimes crushing in turn - than the longer-running successes that have put Herman at the top of the Broadway musical comedy tree. And now Mack and Mabel is back in in a new production, directed by John Doyle, that has its American creator singing a British creative team's praises. "When I saw John's production," Herman is telling me by telephone from his home in , "I really was able to say, well, here it is: this is what I have been waiting for." Torvill and Dean may have impressed the music on the British populace - think of it as the skaters meet Herman's score - but here was the full show stripped of backdrops but shored up with excitement, like an old canvas suddenly made exultantly fresh.

Herman, now 72, comes naturally by an excitement comparable to, say, watching a difficult child suddenly finds its voice, and the composer himself employs the imagery of family. "You're not supposed to say you like your daughter better than your son, since they are both your children. But Mack and Mabel really is the piece of mine that I almost admire most. I think I'm at a time in my life when I can honestly say without offending anybody else that this is my favourite work. I've had three huge successes" - the shows mentioned above - "and I think Mack and Mabel deserves a place next to them. That might just be a proud father's wish, but I really believe it. And I don't say that about my other musicals" - The Grand Tour, for instance - "that didn't make it" the first time around.

The fact is, few composers have made it as frequently or distinctively as Herman, who dates back to a Broadway glory age of hummability that is all but lost. Herman was barely into his 30s when Carol Channing sashayed on to the stage of 's , carrying all before her in the 1964 musical Hello, Dolly!, based on a Thornton Wilder play. The show ran 2844 performances, made Channing a Broadway legend, and sparked a Barbra Streisand film, all the while suggesting a love for musical baubles, bangles, and beads that characterises Herman's oeuvre to this day.

Mame came next in 1966, the story of the eccentric Auntie Mame providing one of several signature roles for the great Angela Lansbury. ( Lucille Ball did the film.) That show's 1508-performance Broadway run was surpassed during the 1980s by La Cage Aux Folles, which ran for 1761 performances; a Broadway revival this past season, directed by Jerry Zaks, won the 2005 Tony for Best Revival of a Musical. Throughout all his shows, Herman wrote songs celebrating survival but also heartache, flamboyance on the one hand and love's fury on the other. While John Kander and Fred Ebb put cynicism centre-stage in shows like Chicago, and Stephen Sondheim was pushing the form explicitly toward the realm of art, Herman made unabashed emotionalism his abiding virtue: Sondheim may have been the one to write the show called Passion, but Herman's output fairly breathed the word.

"Musical theatre began and thrived on songs," Herman is explaining to me. "When you talk about the great age of musicals, or what we call the golden age, or even before that, all you can talk about are the songs: the Porter and songs that poured out of those shows in a way that just doesn't exist today." It's with such an emphasis that Herman confesses to still being thrilled by Mack and Mabel, which tells the story of silent movie director Mack Sennett and his tempestuous relationship with leading lady Mabel Normand. "I love every song in that show," Herman says of a score that includes the rousing When Mabel Comes In the Room (substitute the name Dolly for Mabel and the number could have come out of the earlier show), the feisty Wherever He Ain't, and one of the most tremulous of all torch songs, Time Heals Everything. "One reason that I love this score is I can hear Big Time or I Won't Send Roses and I never tire of them. I really shouldn't be a critic of my own work, but Mack and Mabel is pure musical comedy theatre: I hate using that term, but it separates what I do from some of the rock stuff or the different kinds of theatre that we have now."

Herman shifts the discussion from the general to the specific, which is to say to the production he first saw last June when Doyle and leading man David Soul opened their staging at the Watermill Theatre in Newbury, . (For the tour and subsequent run, two-time Olivier Award-winner Janie Dee is replacing Anna-Jane Casey as Mabel, a part originated on Broadway by the inimitable Bernadette Peters.) Herman had never previously been to the Watermill and he was, as they say, gobsmacked. "It was an eye-opening experience. There was my big musical on a tiny wooden stage but it reached into the heart of Mack and Mabel and made that love story really riveting. You saw its tragic end better than we had ever seen before, and, of course, that's what appealed to me about the story to begin with: It's an impossible love affair but a genuine one, and even though the man" - Mack Sennett, creator of the Keystone Cops - "couldn't say I love you and even though he practically drove the girl to drugs and booze and ruin, he then does something gigantic in actually having his studio make a last film for her - to bolster her when she really needed it, which is a great affirmation. It's a way of saying `I love you' without saying those words."

Doyle's production, says Herman, reminded him in an instant of why he had wanted to write Mack and Mabel to begin with. The writer and biographer Leonard Spiegelglass first told Herman the story of Sennett and Normand against the backdrop of 1920s , and, says Herman, "I said yes right there. Usually, I say let me take it home and mull it over and we'll talk next week. But I just said, yes, I want to do this. It appealed to the romantic in me and to every theatrical piece of my make-up." But a pared-down, stripped-back Jerry Herman sounds like a contradiction in terms. The composer laughs: "I wrote a show about a lady coming down a staircase in a red thing that swept the entire world and was there for seven years" (i.e. "Dolly"). By contrast, here was a Mack and Mabel without scenery flying in and out or the "Hundreds of Girls" referred to in the title of one of this musical's best-known songs. But, enthuses Herman, "I was thrilled and stunned by John's production and by Sarah Travis 's arrangements" - the same team behind the much-lauded revival of Sondheim's Sweeney Todd now packing them in on Broadway. "The fascinating thing about John is he has the vision to go from Sweeney to Mack and Mabel, which says so much about him."

What did he think of the majority of the Mack and Mabel cast playing their own instruments, in signature Doyle fashion, and with the show's celebrated overture now an entr'acte? "It's almost like I had gone to in its heyday and heard that score played by musicians in a Mardi Gras. That's the best way of describing what happened to me when I heard my music arranged in this way. It was everything musically I could ask for and had thought I could never better; this brings out the best in the score." He also embraces American performer Soul in his roll call of plaudits, comparing the Starsky and Hutch alumnus to the role's late Broadway originator, Robert Preston. "David's a very good actor, gritty and strong, and his singing is just right for this. It's not that polished voice, which only makes everything more real."

Herman reports with nearly childlike glee about the ongoing interest in his work - not just the recent Broadway revival of La Cage, but plans for a major new Dolly, to be staged, he says, "a different way." Mame is happening in with Eric Schaeffer directing two-time Tony-winner Christine Baranski, and one of his Broadway also-rans, The Grand Tour, is being done in a small production in , that may give the musical a new lease on life. "It's just a wonderful time in my life," Herman says of his response to "seeing all the old stuff renewing itself. And I think for a songwriter - a Broadway songwriter - there's nothing more satisfying or gratifying than knowing the work will go on."