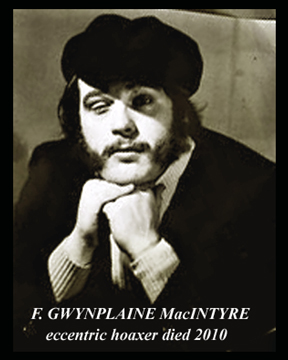 There are very few of us who have not at one time or another come across Fergus Gwynplaine MacIntyre alias Paul Grant Jeffery, Timothy/Tim C. Allen, Oleg V. Bredikhine, with the nickname Froggy.  Five or six years ago, I remember emailing him after reading on IMDb that he had seen The Slim Princess. He wrote back that he saw it in at the home of a girl he had dated; her father was a silent film collector. I quickly email back asking for the collectors name, town etc and never heard from him again.  It was much later that I learned that it was all just a hoax.

It was not just his lying about seeing The Slim Princess but as the film historian, William M. Drew pointed out it wasnt just the hoax he played on me but he derived his sense of importance by exploiting the credibility of the whole silent film community in telling of seeing movies supposedly lost --part of a pattern, not just hoaxing in general, but specifically early cinema. He exploited the void in our knowledge caused by both the loss of many films and the existing un-named ones in archives, including Upstream, the John Ford film found in before it was sent back to the USA The Internet Movie Database is littered with his fake reviews of films he claims to have seen but which in reality he never did.

He enjoyed playing games on people, but in reality he was as cruel to himself as he was to others, living in a dark and ugly fantasy world which was mirrored in his own foul apartment. As part of our culture we are told not to speak ill of the dead but it is hard not to do so with regard to Gwynplaine.

The squalid hole he lived in was full of trash, he had rented of a building on the corner of and , Bensonhurst area of for over 25 years, terrorizing his neighbors, refusing to allow the super to do renovations. One distasteful story told about MacIntyre involved a woman living across the hall, MacIntyre on , grabbed her, duct-taped her to a chair and began torturing her and threatening her life. He stripped her and buzz-shaved her head and then spray-painted her whole body black, the neighbor recovered and quickly moved. MacIntyre was arrested and pleading guilty to third-degree misdemeanor assault.

In MacIntyre's novel, The Woman Between The Worlds, (Dell Trade Paperback, 1994), an invisible woman asks the protagonist to tattoo her entire body so she can become visible. The neighbors recollection of the spray-painting seems a horrific echo of something the author first dreamed up in fiction.

MacIntyre was a very good writer although his science-fiction worlds were dark and in the past few years had been going downhill. Darrell Schweitzer, MacIntyres editor and agent explained that MacIntyres boastful nature and clever stories were gone,and he began telling pathetic stories about terrible things that happened to him, like pleas for sympathy.

Recently the Theda Bara documentary, The Woman with the Hungry Eyes was screened at the Silent Movie Theatre on . MacIntyre received "special thanks" in the 2006 film's credits.

His life was as strange as one of his dark, angry short stories. His death on was a dramatic goodbye; he set fire to his painful life.  Was he born in Perthshire, Scotland in 1948, a twin, with some deformities, perhaps; was he raised in Australia, perhaps; had he been married three times and had two adopted children, perhaps; did he spend his youth hanging out at Oxford, perhaps; was he a telemarketer or a printer, perhaps both.  He did spend his days at the main Public Library doing research.

Bud Webster, a fellow science-fiction writer, noted Among the science-fiction and online community, he was accepted and praised and feted, he said. He wasnt a creepy old guy who lived in a rotten apartment. Much of MacIntyres life was lived in a small room behind locked doors.

He described its rubbish a repository of artifacts both profound and perverted; stuffed with decades of work and waste as the fragments of time that other people throw away.

This life of collecting trash and treasure became the tinderbox of papers that fueled the fire that engulf him. He would like to present himself as an English clubman, an eccentric more at home in the 19th century, MacIntyre was a large robust red haired, 6-foot-3 man, the name Gwynplaine came from the smiling but unhappy character in Victor Hugos The Man Who Laughs.

He sent out farewell e-mails on June 24, 2010 stating that he was extremely depressed and moving to Australia and might not be heard from again, with a quotation  I am just going outside and may be some time  this was the last words of the English Antarctic explorer, Titus Oates in 1912, who wandered out into a blizzard to die. He closed with Straight on till mourning the directions to Peter Pans Neverland. The day before the fire, he posted on IMDb what he promised would be his last review of the movie Metropolis: Nitrate film stock doesnt last forever, and all good things come to a happy ending.  He made arrangements for copyrights and future royalties to be forwarded to one of his publishers.

When the e-mail was received someone understood the meaning and 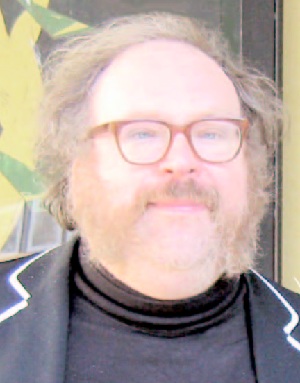 called 911. MacIntyre was taken to for evaluation, but after a couple of hours he was back home. MacIntyre sent a mass e-mail assailing the person he knew had called the authorities (subject line: One idiot ruins everything).

At about on he set the fire, it grew fast it took 12 trucks and 60 firefighters more than an hour to extinguish and the charred corpse of MacIntyre was taken out. It was a painful and twisted death. What was left of his life was charred, soggy, hip-high heap. There was a huge collection of esoteric science-fiction books and journals, personal correspondence and drawers full of rejection letters and notices of unpaid taxes. There were countless devices and literature suggesting an encyclopedic array of sexual deviancy

It took a five-man crew two full days to fill a 20-yard trash bin with Froggys fragments of time.

The emails that Gwynplaine sent out before he killed himself were found the Black Gate website.

Subject:  I am just going outside and may be some time.

I wasn't sure where to post this, so I'd put it in "Miscellaneous" but then I realized it ought to have been put here instead. Perhaps the other post can be deleted.

Hello, folks. Auf wiedersehen, folks. I'll be gafiating for a year or so.

A medical problem that has caused me no end of inconvenience my entire life (caused by a minor typo in my DNA) has finally compelled my full priorities, so I'm taking a year off from writing and public activities in order to deal with it.

I've no doubt whatever that the world will get on just fine without my participation.

I'll be recuperating near Frog Rock, Borroloola, in : a truly beautiful place where I've had some memorable experiences. Straight on till mourning.

Subject:   One idiot ruins everything

Thanks to all for the kind wishes. (Memo to Dave Nicholas: Aye, please call me Froggy.) (Memo to Susan Shwartz: It's spelt 'Froggy', not 'Froggie'.)

I'm humbled by all this good will, but just now I'm in no mood to savor it.

I had hoped to make a graceful departure into gafiation for six months or a year while I attend to medical problems. In making my departure, I directed attention to the biography page on my website ... not for the sake of my bio, but in the hope that members would read the material preceding it on the same page.

Basically, I noted that any persons privacy is even more sacred than that same persons life, since life is only temporary and therefore only temporarily in jeopardy. Privacy is forever in jeopardy. An individuals privacy requires and deserves protection both during that life and afterwards, forever.

No sooner did I post my gafiation than one self-righteous idiot who reads these boards (yet who didnt read my bio essay) decided to send police to my apartment in the belief that my life was in danger.

Of course my life is in danger. Were all of us mortal. Prolonging your survival is merely forestalling your death. My eventual death is a certainty. Its my privacy that I mean to preserve.

I am not now at my address and unlikely to be there soon. Thanks to one self-righteous idiot on this board, police broke into my flat and terrified my house-sitter / general assistant: a good friend whom I first met as a result of our mutual and separate OCD therapy. I have mentioned that Im an abuse survivor; my assistant is a survivor of abuse even more ghastly than what I experienced. He also has a history of suicidal behavior which he eventually conquered (I hope) through years of therapy.

As a result of one self-righteous busybody on the SFF.net site, the NYPD broke into my flat and then hauled this unfortunate individual half-naked to hospital, where he was further traumatized and his privacy further invaded for several hours. I am thousands of miles away and I had to involve a lawyer to extricate him.

He remains traumatized. If a suicide does occur in my apartment, I will consider suing the idiot on the SFF.net site who called the police.

Doubtless, the idiot will plead that he thought he was doing the right thing, life at stake, blahblah.

The stinking idiot on this site who violated my privacy has now also endangered the mental stability and possibly the life of my house-sitter, a deeply neurotic but virtuous individual. He also made the NYPD break my front door.

Im too busy just now to consider a privacy-violation lawsuit, but I wont tolerate a repeat of this.

I haven't time for this stuff just now.