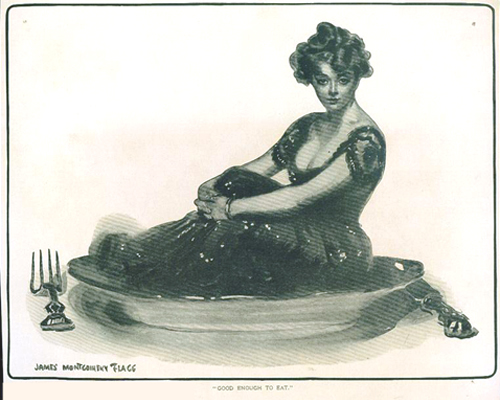 Once upon a time in a land far, far away on the edge of reality were recreational thinking dwells, an email came flowing into my mailbox out of the ether.

Lets begin with a very delectable and perhaps disturbing image of Mabel Normand which the charcoal pencil of James Montgomery Flagg conjured.  Now, my friends, does the image truly indicate that Flagg was trying to foment cannibalism?  That is just silly!...but perhaps No it couldnt be that he was inciting people to, (dare I think it) eat her up! Is this encouragement; is this a blatant appeal to the most primitive in our society to dine ON a pretty girl (as opposed to dining WITH a pretty girl)?

We can speculate on how this might have affected a young impressible girl like Mabel, it might have spurred her on to comedy, particularly of a physically energetic kind.  Did the paranoia and fear of people looking at her as something to devour inspire much of the unsettling imagery in her films in which monstrous men are forever trying to kill her? - by tying her to rocks, railroad tracks, throwing things at her (not just pies) Oh, dear there it is again, food, eating and Mabel covered with custard! Stop, stop thinking about that! Did it start with Flaggs picture?

Now, let us turn to a broader philosophical plane, Flaggs picture as a metaphor for Mabels entire life and career.  After all she was indeed cannibalized by the public, consumed by the effects of the scandals that swirled around her, She was Good Enough to Eat sad but true!

(This is based on a little repartee with the film historian, whose name is withheld to protect the guilty  )