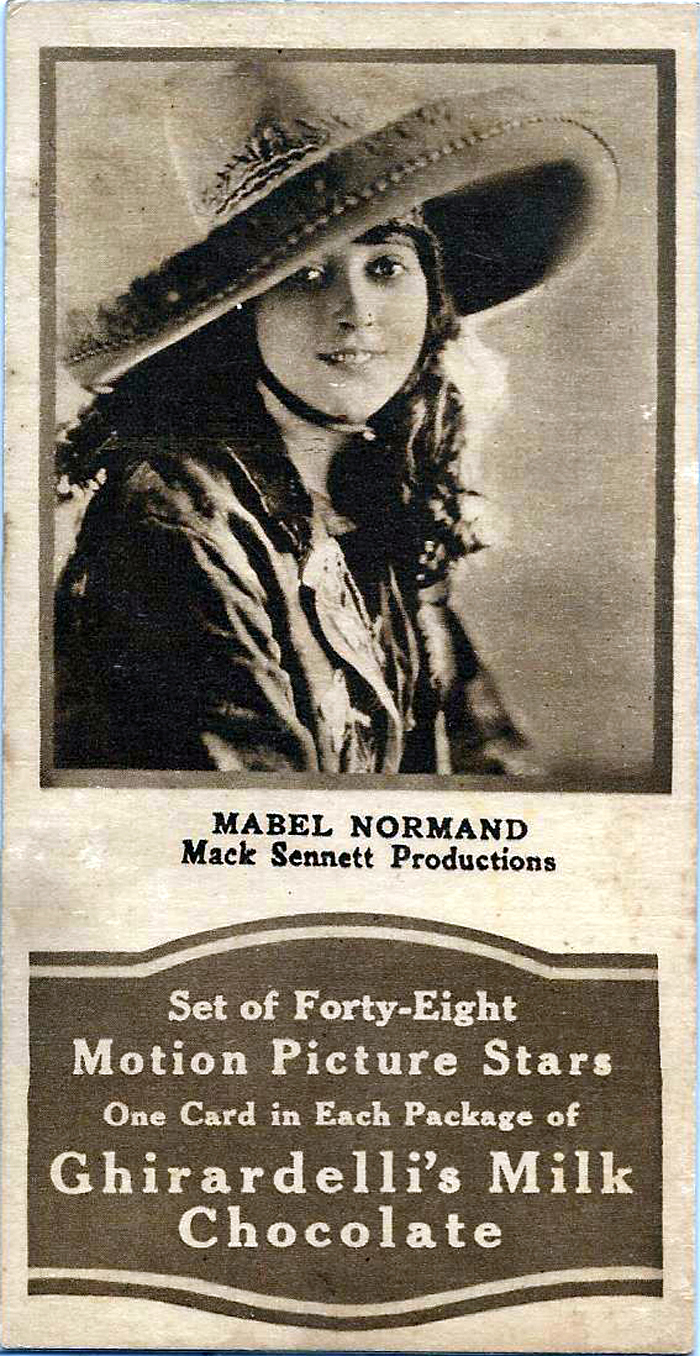 In almost everything we read about Mabel Normand, we will find a reference to Mabel and chocolate so it isnt truly surprising to find her in her Suzanna costume on a little card tucked into a Ghirardelli chocolate package in 1923. 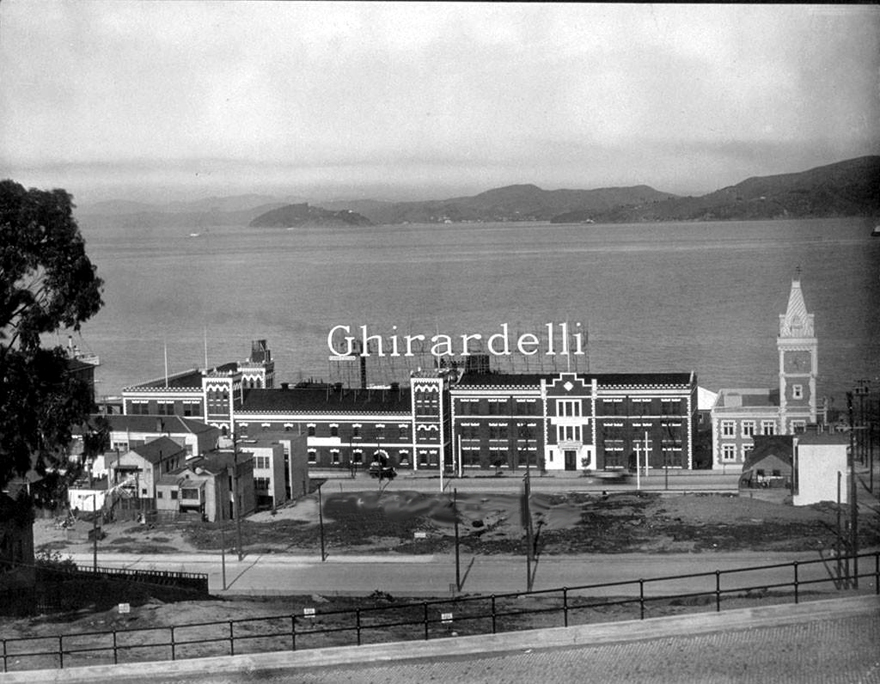 A company with the famous light bulb sign visible for miles seen by ships passing through the was there when Mabel Normand traveled to to make comedies for Keystone.  If you have traveled to Fishermens Warf, the Ghirardelli sign is still there.

Ghirardelli had been in since the Gold Rush era, it is a business that has been in continuous operation since before became part of the . It is the second oldest chocolate as Baker's Chocolate was founded in 1780 in . Until the railroad Bakers Chocolate never made the trip to the western territories and even later came Hershey but first in was Ghirardelli. 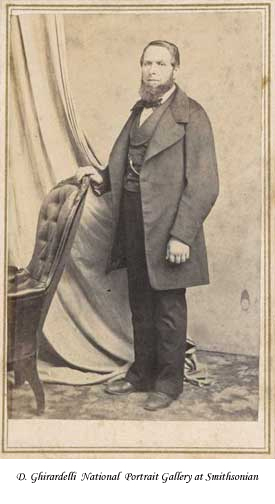 Domenico Ghirardelli was an apprentice to Romanengos a confectionary shop in , were he learned to prepare sugarsweetened chocolate paste to be diluted in water as a beverage, learning how to make and sell sugar loaves and candies.  He was the only son of a modestly successful merchant in the town of , south of ; with the financial help of his father, in 1837 the twenty year old Domenico Ghirardelli, and his new wife, Elisabetta "Bettina" Corsini, sailed for . Ghirardelli found work in a coffee and spice shop there. In 1838, Ghirardelli and his wife rounded Cape Horn and ended up in Peru; Italian artisans and gold masters had lived in Lima since the first Spanish colonial days in the sixteenth century helping to create the Baroque metropolis; he opened a confectionary shop on the block-long Calle de los Mercaderes near the central plaza near the city's cathedral and the Italian Lyric Opera. He hispanicizing his first name to Domingo and sadly Bettina died in 1845 however the following year Ghirardelli married a Spanish-Peruvian widow, Carmen Alvarado Martin with an infant daughter, Dominga. 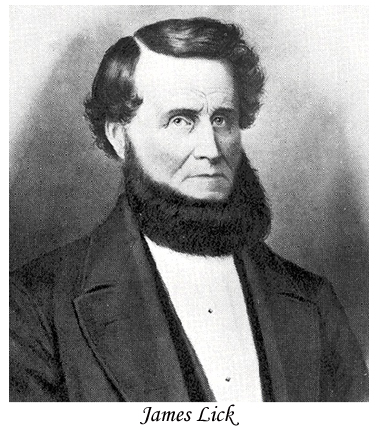 His neighbor in was James Lick, an American piano maker, and later a land baron; it is his name on the SF observatory. In 1848, when Lick went to , he carried 600 lbs. of Ghirardelli's chocolate and in San Francisco Lick began buying land.  It wasnt long before and with the news of gold's discovery in January 1848, sent word to Ghirardelli to come to San Francisco, Ghirardelli sailed north leaving Carmen in Lima. 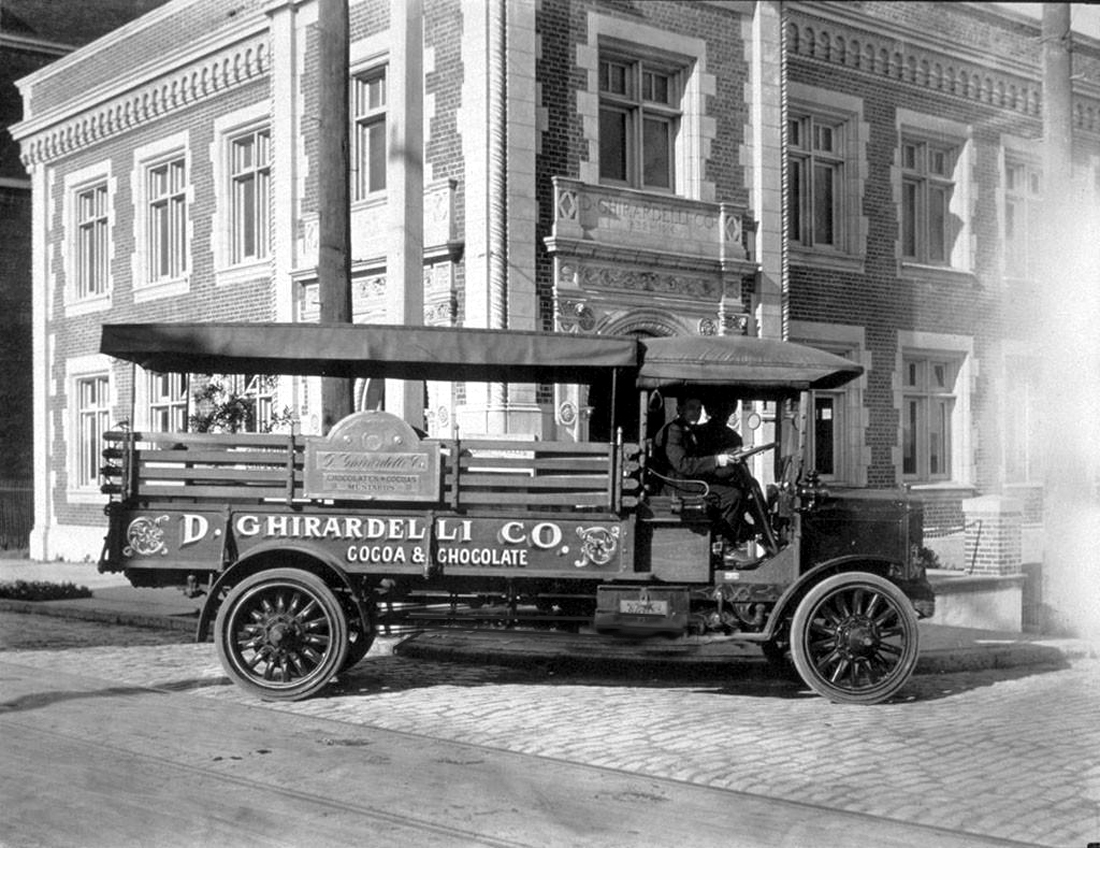 The 1849 gold strike brought Ghirardelli to California; he tried mining but soon found himself running a tent-based store in Stockton selling confections and general supplies although his English was not particularly good he ended up in the Sonora area of the Mother Lode, where other Italians from Latin America, the Spanish-speaking, Portuguese-speaking, and French-speaking had gathered at the rivers and mining camps. Ghirardelli found that there was more gold in selling to the miners then mining for gold.  He had the tent store in and in he had grocery stores, a soda fountain, coffee house, and part interest in a twenty-room hotel. He ran delta shipments from to replenish his stock in ; by 1851, Ghirardelli was one of 's "Moneyed Men." Fires in both and destroyed his businesses however soon he was making money again. 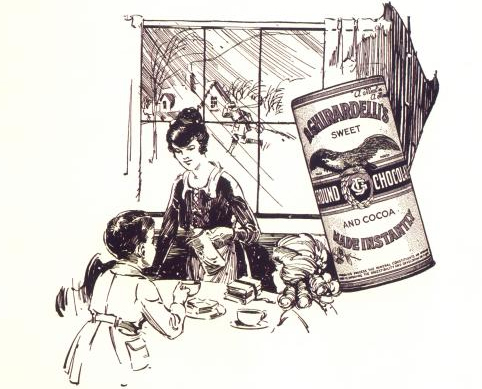 On , the chocolate company was officially launched as a manufactory and sales shop and Ghirardelli was making enough money to send for his family. In 1853 Ghirardelli's Peruvian wife, Carmen her daughter (whose father had been French), and the couple's first two children had sailed to San Francisco with 200 lbs of cocoa beans; the D. Ghirardelli & Co was been in continuous operation ever since.  Ghirardelli combined chocolate and candy with liquors, ground coffee, and spices (dry mustard) was the focus of his business.

Ghirardelli served in the Vigilance Committee of 1856 and in 1865 he helped forge ties between 's Italians and the more powerful French community, which controlled eighty or more of the city's businesses early in the 1850s, the family of eight needed more room then apartment above the business. 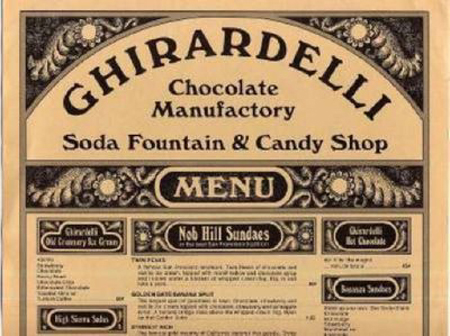 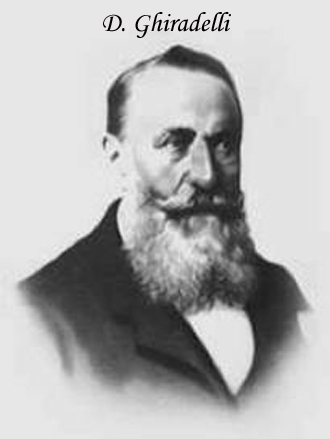 The Ghirardelli Oakland estate was built in 1859, one of the town's first big houses with a garden that took up a square block. He was a donor to the Garibaldi Guard, helping the charismatic guerrilla patriot Giuseppe Garibaldi leader and his "Red Shirt" army in . Giuseppe Mangini came to work for Ghirardelli as a bookkeeper, after being sentenced to death for his involvement in Garibaldi uprising in . He married fifteen-year-old Virginia Ghirardelli in 1862, presenting the Ghirardellis with their first grandchild, Aurelia, in 1863 and in 1868 Mangini became a partner at the Ghirardelli firm; Virginia Mangini died leaving Giuseppe a widower with a young child in 1869.

On the staircase at the estate were figures of Christopher Columbus and George Washington in the garden was a large fig tree. Ghirardelli sent three of his five sons at age ten to be educated at a boarding school. Cesare, the youngest, died there, but Domingo, Jr., and Joseph returned at age seventeen to attend and work at the firm. Both men were bilingual throughout their lives with educations grounded in business and economics, their father wanted them to continue the family business.

The Civil War helped, became the center of industry because of its isolation. A number of companies imported coffee and spices including Ghirardelli's, but only Ghirardelli manufactured chocolate.  In 1865, Ghirardelli was importing a thousand pounds of cocoa beans a year plus coffee and spices and the company sold alcoholic. 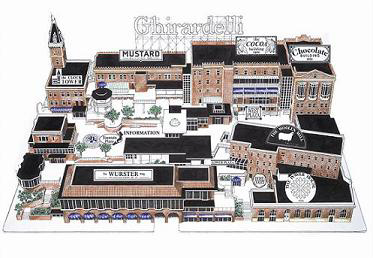 It was the Broma process of hanging cocoa beans in bags in a warm room, the cocoa butter dripped out allowing for the creation of coco power that Ghirardelli patented. Anticipating the transcontinental railroad's completion in 1869, the company started producing easy-to-ship, powder that made cocoa powder an American staple. 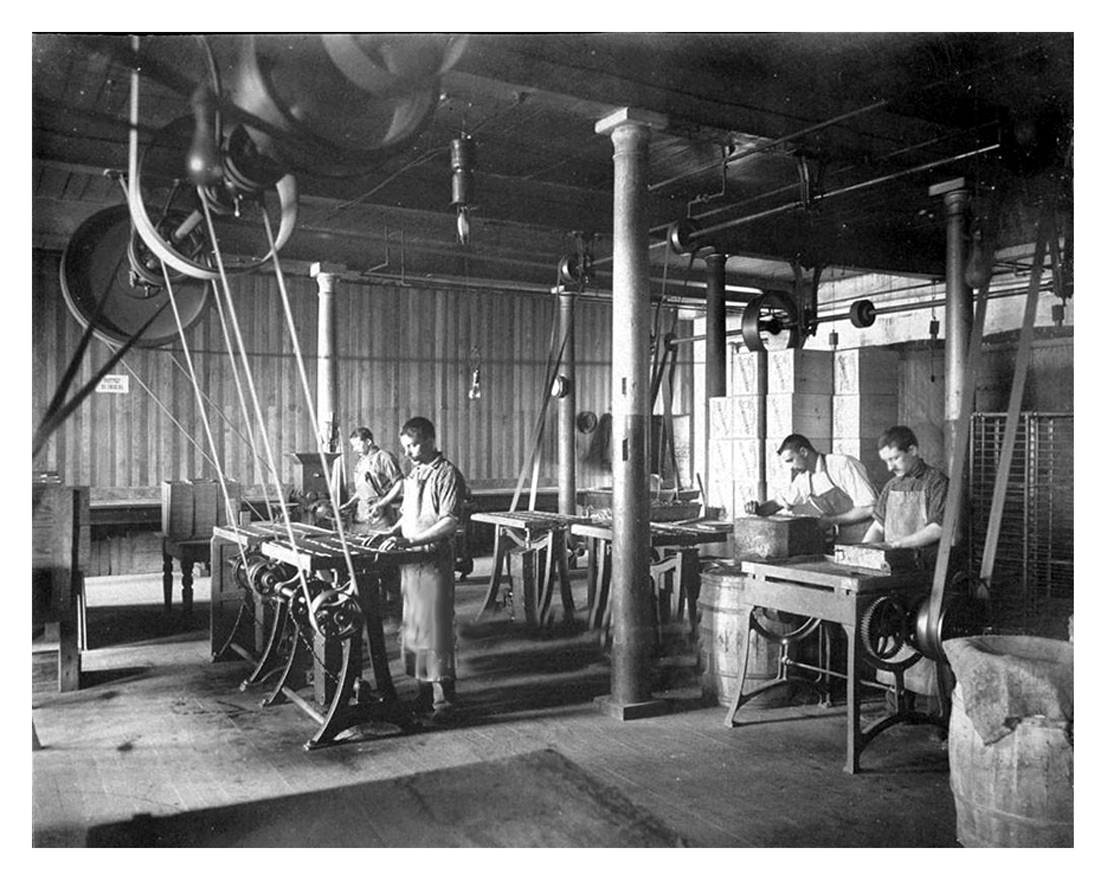 The whole country was in an economic rescission in 1870 and Ghirardelli like many of companies went bankrupt, during their recovery they dropped all their other product lines only keeping chocolate. In 1872 the store in Hornitos run by Ghirardellis stepdaughter, Dominga and her husband. Frank Barbagelata was closed.  In 1874 practically everything was sold including the family house and contents, properties in , and Ghirardelli's branch stores. 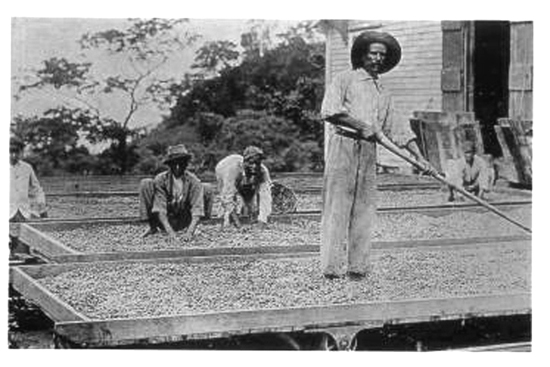 By 1885 Ghirardelli became an empire, processing almost a half-million pounds of coca beans a year. Ghirardelli was fifty-six with three talented sons; the company name became Ghirardelli and Sons, and got more dynamic in their marketing, they bought new machinery and added to their workforce and started to export to China, Japan, and Mexico, and the western region of the country marketing the coco powder under "Eagle" and introduced streetcar and sidewalk ads on tin and wood for the hot coco to children. Domenico retired to in 1889 where he died on of influenza at the age of 76, he requested that his body be sent back to , the land of self-made men. 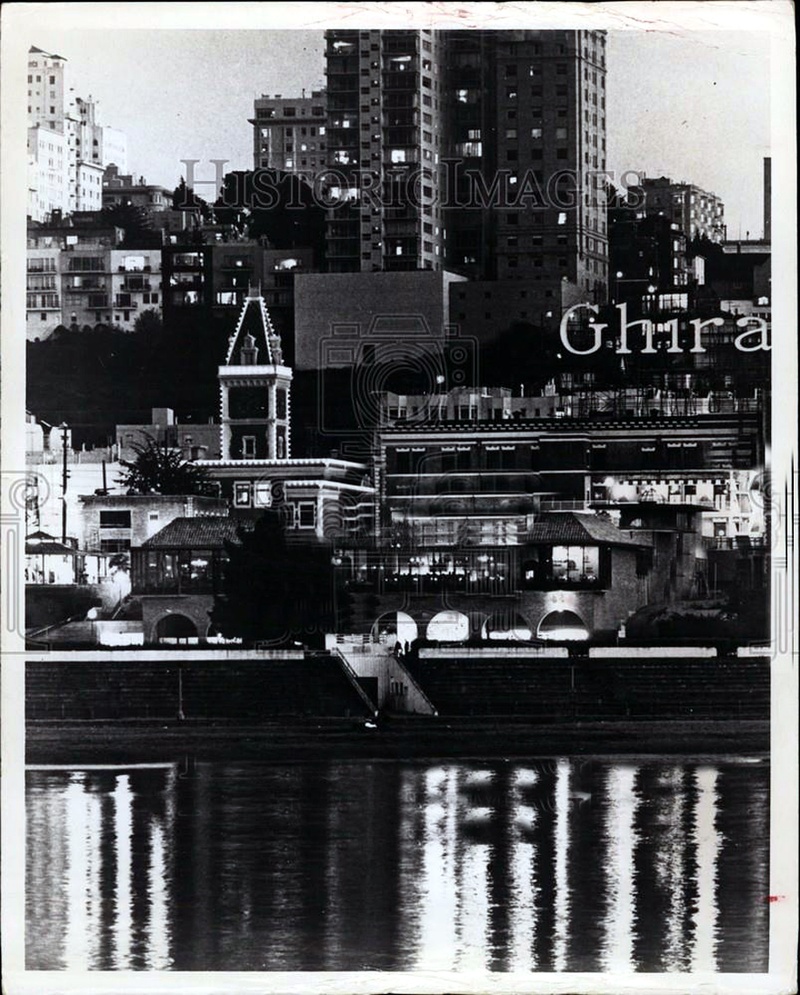 The next president was Domingo Ghirardelli, Jr., age forty-seven, with siblings Joseph, Louis, Elvira and Angela, who were the part owners of the company. The 1897 business memo written by Domingo, Jr. is a classic In this country, in this age, there is no such thing as standing still. One must progress, or retrograde. 'Leave well enough alone' means stagnation. 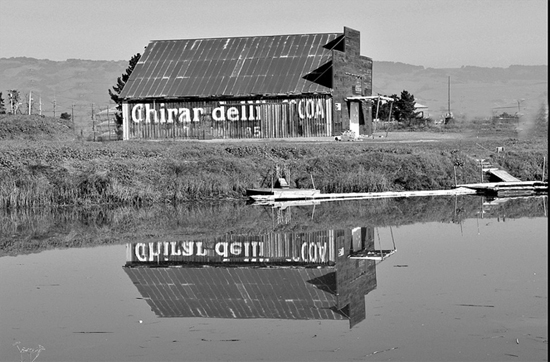 The Ghirardelli brother purchased the Pioneer Woolen Mill building on 's north waterfront in 1893. The factory included an apartment building for workers and its own power station. The 1906 earthquake was only a temporary interruption leaving the factory and equipment largely unscathed, however Joseph was killed, he was 47 and Louis had died in 1902 of pneumonia. Domingo, Jr. pushed ahead. 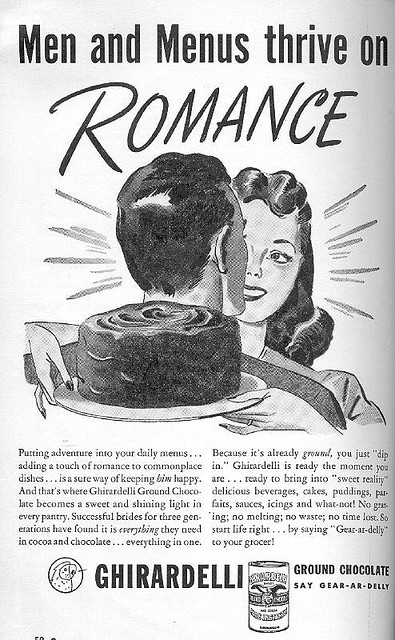 In 1910, he accelerated advertising focusing on the Ghirardelli's 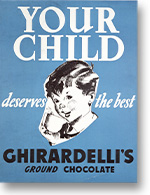 hot cocoa's allure for romance and health. The Panama-Pacific International Exposition of 1915, "dream city" on 635 acres celebrating the opening of the , fed the ambitions Ghirardelli to mold the event's potential, he was one of the directors (keeping Hershey out). Among palaces, halls, and courts on American agriculture, machinery, and horticulture, and exhibits and pavilions for twenty-five nations on four continents was a seven-block entertainment and commercial area. Ghirardelli commissioned Bakewell and Brown, architects, to build soda fountain fantasy pavilion. Besides Mabel Normand and Roscoe Arbuckle were some twenty million visitors. 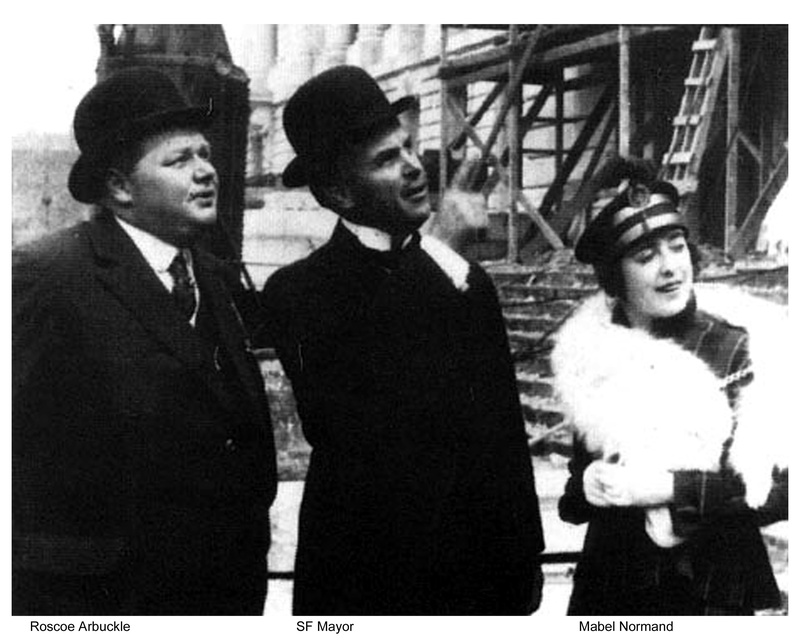 The Clock Tower was added to the factory during this period, it was modeled after the 15th century Chateau

Bois in .  Mabel Normand and Roscoe Arbuckle and the whole world were marking the importance of

with the celebration of the Panama-Pacific International Exposition in 1915. 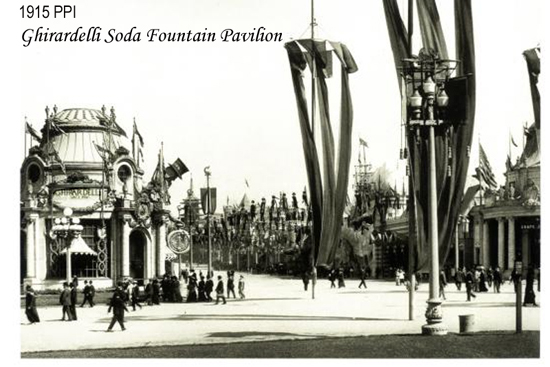 The company's next family president was Alfred Ghirardelli (1884-1956). Alfred's daughter Polly Ghirardelli Lawrence (1921-1997), was the mother of Sydney Lawrence; she published two volumes of interviews for the Bancroft Library's Regional Oral History Office in 1985. Sydney Lawrence continued researching the Ghirardelli family for the Museo Italo-Americano in using numerous untapped archives and collections. 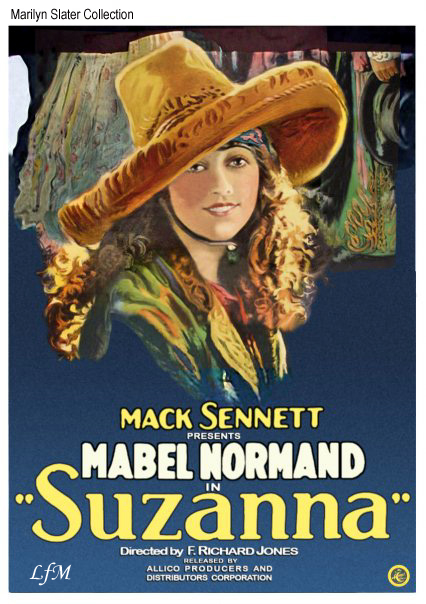 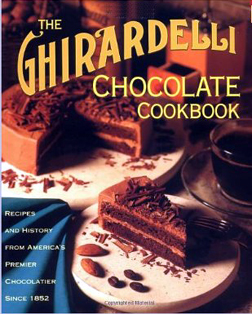 In 1922 Mabel Normand was back working for Mack Sennett in and the lighted "Ghirardelli" sign was erected in . It was 15 feet tall and 125 feet long, the sign was and still is a beacon for ships entering the .

In over the 160 years of Ghirardelli Chocolate Company has become one of the few chocolate companies that controls every aspects of manufacturing, removing the outer shell; roasting; grounding; making the candy and selling it. The company was sold to the Rice-A-Roni (Golden Grain Macaroni) then Quaker Oats and now Lindt & Sprungli.  The factory building is now preserved historic landmark. 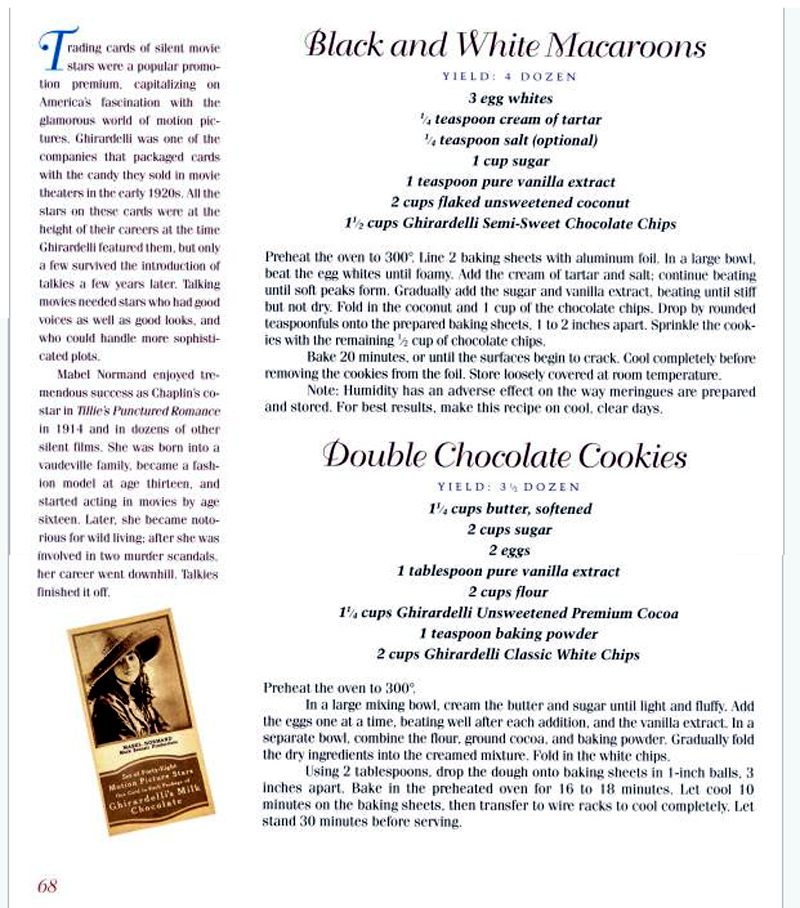 In the GHIRARDELLI CHOCOLATE COOKBOOK by published in 1995, which is filled with recipes all made with the specialty Ghirardelli chocolate. There is some memorabilia information included in the cookbook; old pieces of advertising and Ghirardelli ephemera  One example is the Motion Picture Stars trade cards that were once found in every package of Ghirardelli's Milk Chocolate one features Mabel Normand.

The photo and link are a gift from Nick Pinhey 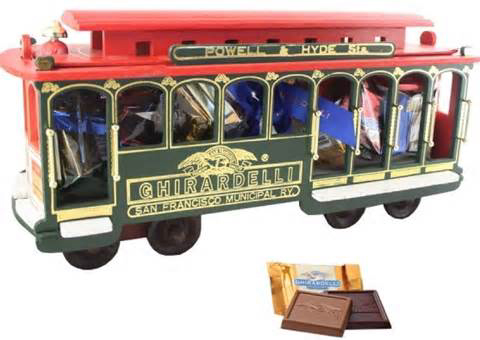 Much of this information comes from Sydney Lawrence, a member of the Ghirardelli family:

If you collection Motion Picture Star Cards, here is a website just for you: