Eva Tanguay was the "I Don't Care" girl: a madcap woman on the verge, trampling the conventions of demure femininity, polite society, and musical theater. "They say I'm crazy and got no sense/ But I don't care," Eva sang. "They may or may not mean offense/ I care less."

The song was broadly comic but shocking nonetheless in 1904, when Victorian notions of female propriety prevailed. Blasting out "I Don't Care," Eva Tanguay gave voice to an anarchic feminism that claimed the old stigma of female "hysteria" as a badge of honorthe Victorian neurasthenic recast as a liberated, libidinous 20th-century wild-woman

In search of Eva Tanguay, the first rock star

Eva Tanguay was a Canadian-born vaudeville performer sometimes cited as the inspiration for the character of Norma Desmond played by Gloria Swanson in the 1950 film noir Sunset Boulevard. She was known as The I Don't Care" girl (for the 1905 song by Jean Lenox and Walter O. Sutton she made famous later) - or "Energetic Eva" and "The Wild Girl" from the titles of silent films she appeared in (1916 and 1917). 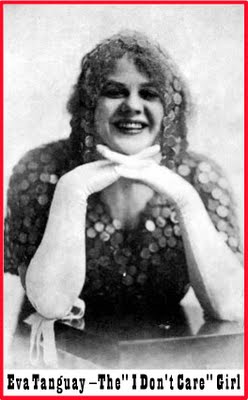 She was a huge celebrity in her day - one of the original pop stars - and she made a fortune, which she lost in the 1929 crash. It was reported that Eva lost more than $2 million. She resembled a Madonna, or a Lady GaGa, with a little Bette Midler and thrown in - an outrageous female performer with considerable talent but even more self-promotional savvy. She was popular with everybody except the most censorious prudes, but especially popular with young women. She was good friends with fellow iconoclast Sophie Tucker. She was a scrappy rebel, light-heartedly risqué in her performances, and was rumored to have had a lot of lovers. She was also famous for performing other free-spirited songs, such as "It's All Been Done Before But Not the Way I Do It," "I Want Someone to Go Wild With Me," and "I'd Like to Be an Animal in the Zoo."

She was queen of extravagant costumes - she apparently performed in one costume made of dollar bills and in 1910 a year after the penny was issued Eva costume was covered with pennies. Another dress was covered in coral which weighed 45 pounds and cost $2000.

Edward Bernays, the celebrated "father of public relations," called Eva Tanguay "our first symbol of emergence from the Victorian age.".

She was also notorious for her publicity stunts - she staged fake wedding to theatrical female impersonator Julian Eltinge, where she dressed as a

man and he a woman. Her career was pretty much over by 1930 but she planned for a comeback that never happened; she lost her sight due to cataracts, her old friend Sophie Tucker paid for the surgery which restored her sight but she was ill in her Hollywood home for almost a decade before her death.

Eva Tanguay was the daughter of a Marbleton Quebec doctor when she was born in 1878, the family moved to in 1884, where her father died.  Eva was on the stage at the age of eight at an amateur night in and at 10 she was touring professionally with a production of Little Lord Fauntleroy and by 13 she was in a Broadway musical, My Lady.  At 17 she was performing in Vaudeville as a solo act.  By 1910 when she was at the height of her fame at 22 Eva was the highest pay performer on the Vaudeville stage.

Aleister Crowley, the English poet and sexual revolutionary considered her "The American Genius," he wrote The true American is, above all things, FREE; with all the advantages and disadvantages that that implies Eva Tanguay is the perfect American artist. She is starry chaste in her colossal corruption."

Eva was brassy self-confident songs that symbolized the emancipated woman, such as "It's All Been Done Before But Not the Way I Do It," "I Want Someone to Go Wild With Me," "Go As Far As You Like," and "That's Why They Call Me Tabasco." In showbiz circles, she was nicknamed the "I Don't Care Girl,"

She was just the type of entertainer that the Ziegfeld Follies was famous for and when Florenz Ziegfeld in 1909 had a salary fight with Norworth & Baves; Eva was signed.  She demanded the musical number Moving Day in Jungle Town that had belonged to Sophie Tucker and got it.   Later Sophie and Eva became friends.

Her love life was as light-heartedly risqué as her stage performance; there is some confusion on the number of actually marriages.  In 1908 at 30 years old, Eva had done a publicly marriage with Julian Eltinge, although they exchanged rings, they never really married.  Tom Ford, the dancer became her husband in 1917, Eva was nearly 40 after a problematic 4 years together; they were divorced.  Next she developed a romantic relationship with Roscoe Ails but their relationship was violent.  Next a 23 year old pianist, who accompanied her by the name of Al Parado married the 49 year old Eva in 1927. She annulled that one, claiming fraud, it was reported she just married Al as a publicity stunt.   Marriage didnt seem too important to Eva.  One of her affairs is alluded to in the book Elegy in Manhattan written by George Jessel; Eva is said to have had a heated affair with George Walker, the African American comedian, the husband of Ada Overton Walker, the musical comedy star. 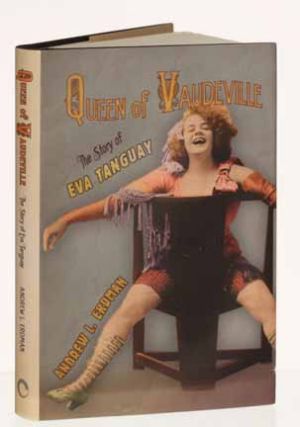 Eva was writing her autobiography at the time of her death, three parts were published by W. R. Hearst in 1946-1947 titled Up and Down the Ladder.

In 1953, 20th Century Fox made a film loosely based on her life,  "The I Don't Care Girl", with Mitzi Gaynor and Oscar Levant). But she was almost "forgotten" however, recently there has been some interest and scholarship has started to restore her fame, and the first full biography of her was issued in 2012, by Andrew L. Erdman, Eva Tanguay: Queen of Vaudeville. : Press, 2012.  Eva died of a heart attack in , on January 11, 1947. She was 69 years old; she is interred in the .

Early on, Eva spent more then she made on publicity as she knew that it took money to make money.  But the best publicity was free publicity and Evas outrageous behavior made for a lot of press.  There is a story of her week in a hotel with a married man in 1907.  The man was C. F. Zittel and his wife hired a detective dressed as a bellhop to burst up the love nest the story made headlines but only enhanced Evas image.

Then there was the alleged kidnapping; allegedly having her jewelry stolen. Once she throw a stagehand down a flight of stair; she received a $50 fine for that act of temperament and a lot of press coverage and sold a lot of tickets. She was appearing in a production called Hoodoo, when a fellow chorus girl accused her of hot-dogging onstage, Eva turned and choked her until the girl's face turned blue and she passed out. 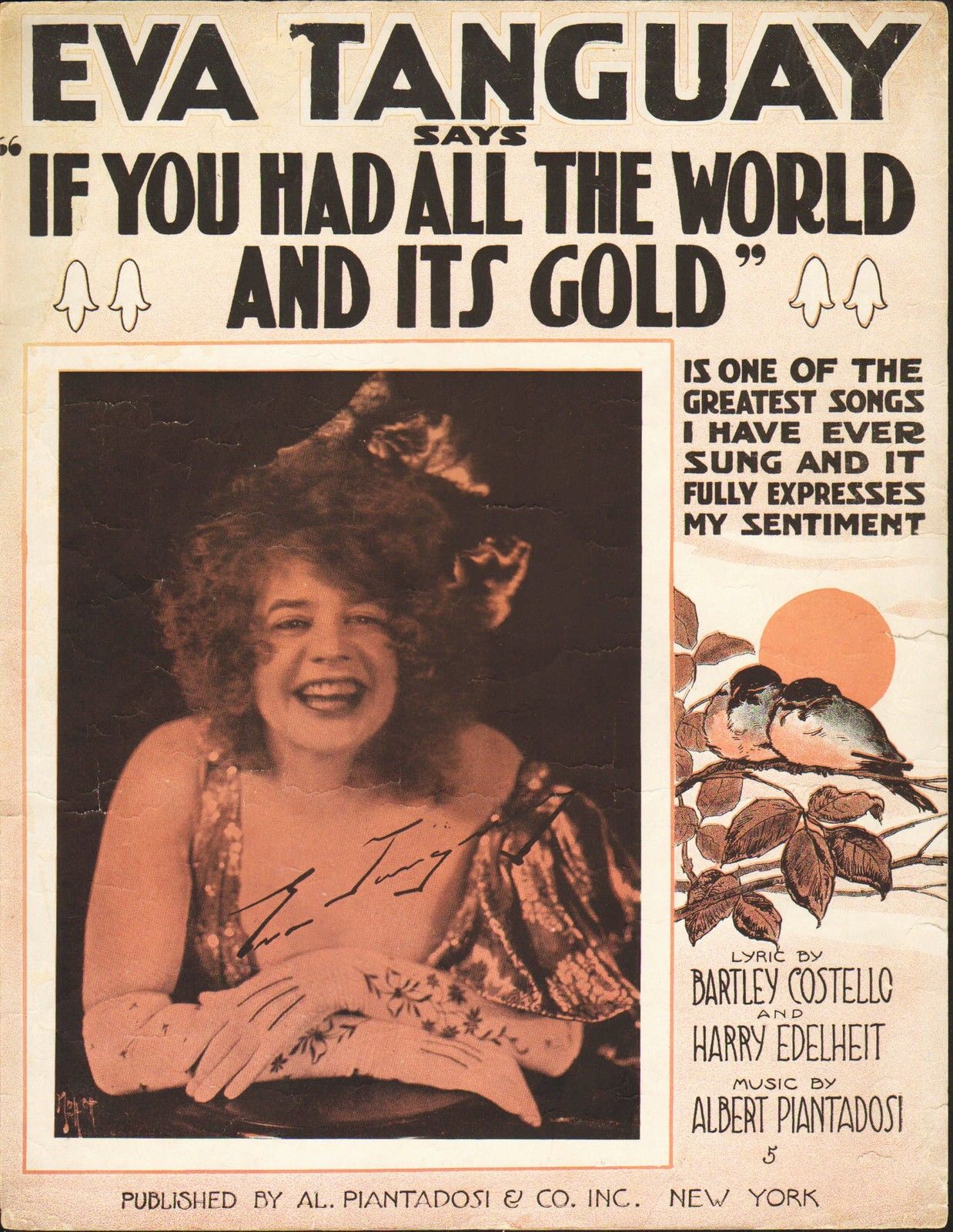 Karie Bible posted, Vaudeville and musical comedy star Eva Tanguay died on January 11, 1947.  she was often called The I Dont Care Girl after a song she popularized on stage.  Tanguay was brazen, sexual and daring  a trailblazer for other female performers who would follow in her wake.  She sang songs on stage such as Its All Been Done Before But Not the Way I Do It, Go As Far As You Like and Thats Why They Call Me Tabasco she is buried at Hollywood Forever.

James Bazen, said, I saw one of her films THE WILD GIRL (1917) a few years back at the Cinefest festival.  I have to admit to being very underwhelmed by her, although Im sure thats no fault of Ms. Tanguays I imagine her particular talented probably dont translate well to the silent screen.  Still interesting to see.

Actress, Singer. Born in , she was a singer and entertainer who billed herself as "the girl who made vaudeville famous". She made her vaudeville debut in in 1904 and went on to have a long-lasting vaudeville career which commanded one of the highest salaries of any performer of the day. A skilled performer, she was remembered for her lavish costumes and brassy self-confident songs which included "I Want Someone to Go Wild With Me", "Go As Far As You Like" and "That's Why They Call Me Tabasco". In addition to her singing career, she also starred in two silent films "Energetic Eva" (1916) and "The Wild Girl" (1917). In the 1930s, she retired from show business due to cataracts which caused her to lose her sight. She relocated to , where she remained until her death.

George Ade, the journalist and playwright dubbed Theodore Roosevelt "the Eva Tanguay of politics." One of her hits was titled "They'll Remember Me a Hundred Years From Now. 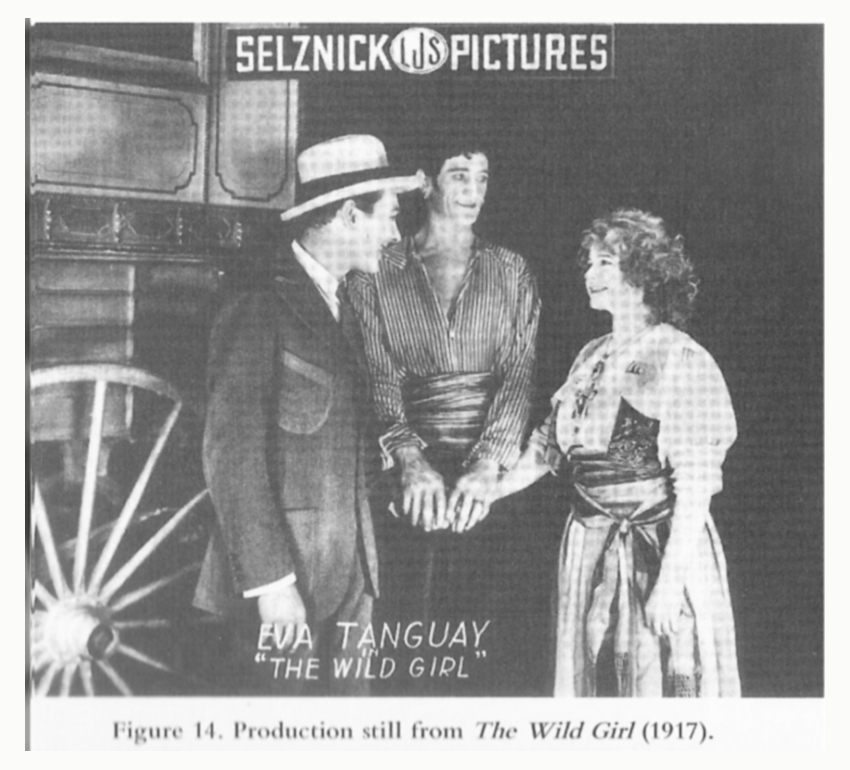 On You Tube the story is told of the Ghost of Eva Tanguay haunting the , were in the 1920's Eva Tanguay was as popular then as Lady GaGa is today.  http://www.youtube.com/watch?v=AGVGQnjQc0I 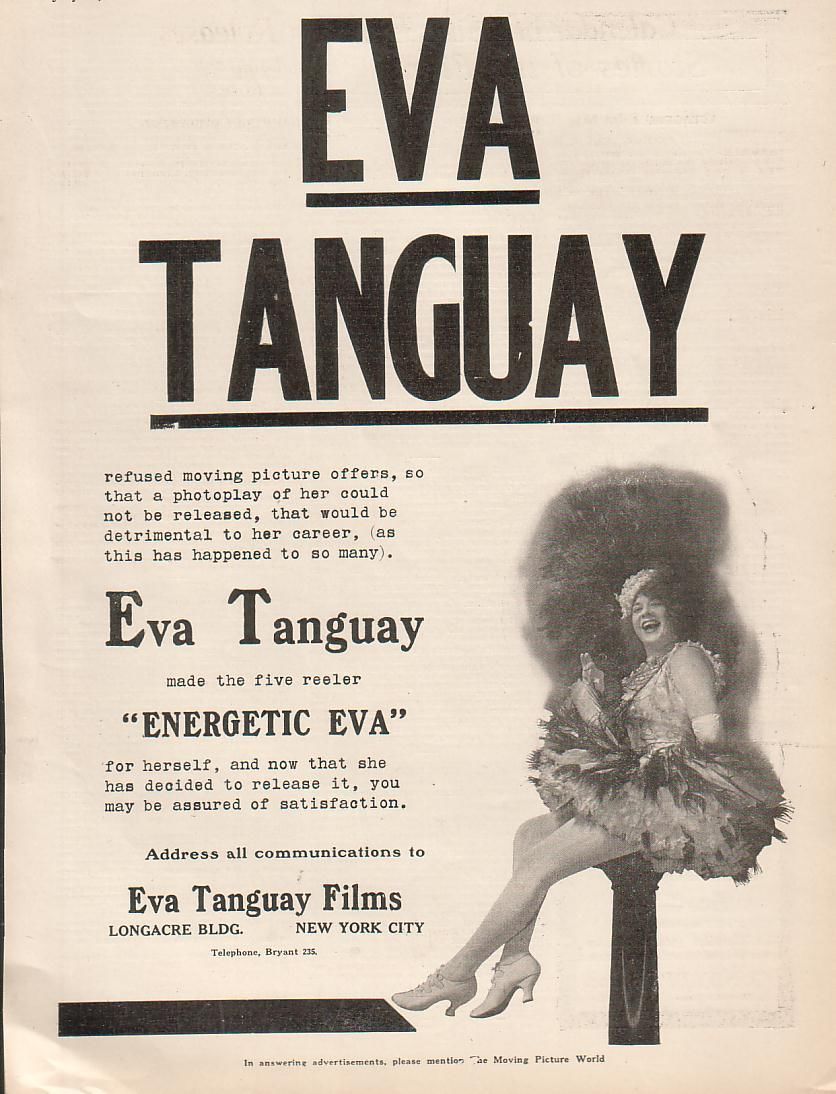 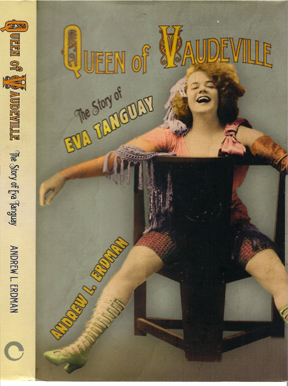 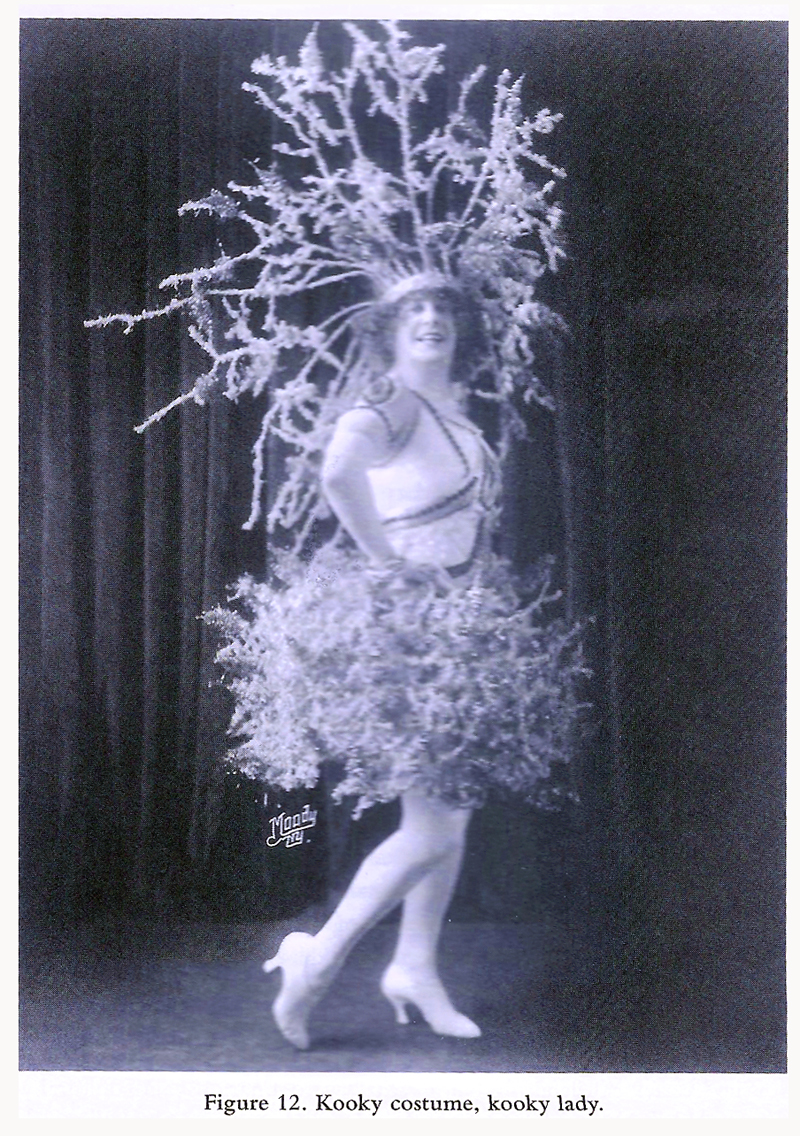 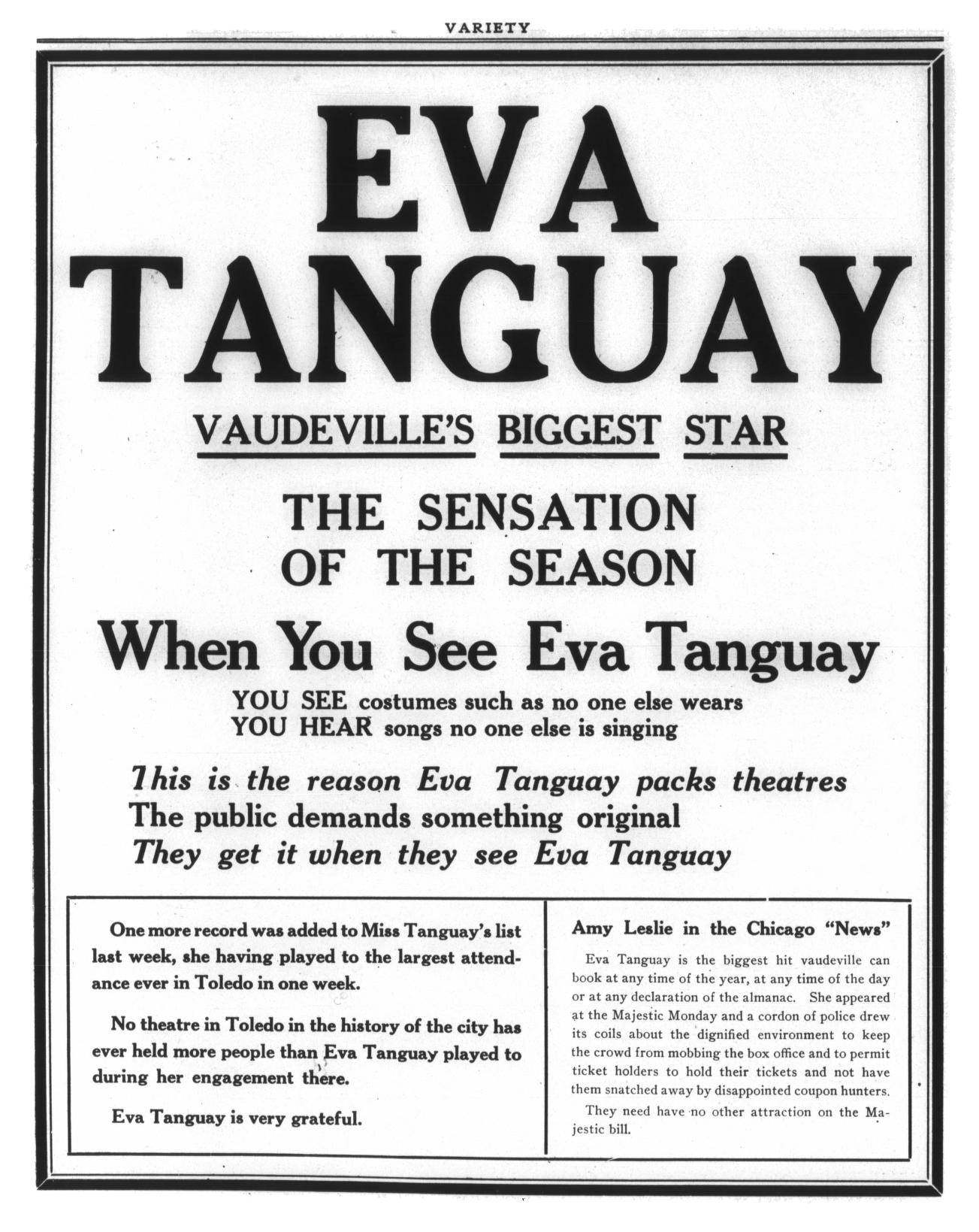 Speak French? If so, you might enjoy the front-page interview with the author in 's Le Devoir newspaper.