March 1930 was a full page of photographs by Enrique (Harry) Vallejo of Mabel Normand in character.  According to , he was her cameraman and the images were created directly from the original stills, 1913-1915. 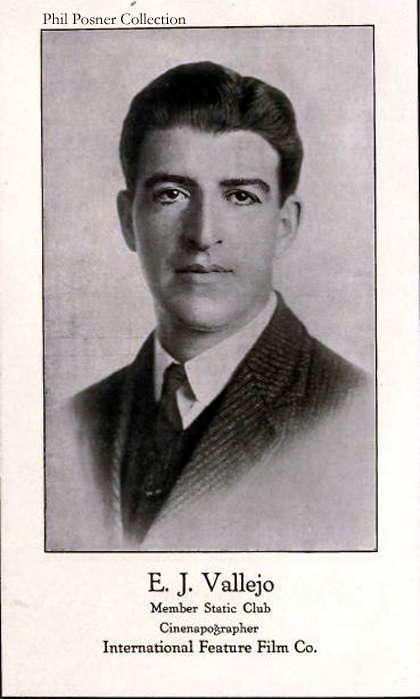 I checked in Brent Walkers book for information regarding Enrique/Harry Vallejo but only found the name E. J. Vallejo, listed twice but no real information about him.

The IMDb does list Enrique Juan Vallejo; - .  In the short biography information include that Enrique started working in film with D. W. Griffith in 1910, later working with Chaplin and Mack Sennett; he was the cinematographer on the 1916 RAMONA as Enrico Vallejo.  He later formed a production company with actor Donald Crisp and retired from films in 1935.

The only Mabel Normand, Keystone comedies listed was Kid Auto Races at  (with Charlie Chaplin).  The photos on the tribute pages included images from The Gypsy Queen (1913), The Sleuths at the Floral Parade (1913), Those Good Old Days (1913), Barney Oldield's Race for a Life" (1913),  Mabel at the Wheel (1914), and Oh Mabel Behave (1915/released 1922).  The caption at the bottom of page 10 - International Photographer  March 1930  reads;  A Pioneer of the Motion Picture Industry Goes Home to Rest Our Mable Normand in her happier days when she was the biggest and most charming star in pictures.  Here she is photographed in character by Enrique (Harry) Vallejo, Local 659, who was for long her cameraman.  These pictures are engraved directly from the original stills.  Goodbye, Mable; your place in the history of the Cinema is assured.

What little I found out about Enrique (Harry) was that with Harry Revere, Dal Clawson and Bert Longnecker organized the first newsreel The Argus Weekly in 1912.  The slogan was The Argus Eye Sees All..  The headquarters was in two little bungalows at 4500 Sunset, with a laboratory and offices; the original studio later the Tiffany-Stahl studio.  They showed the weekly news in various theatres. They sold The Argus Weekly to Pat Powers and leased ground near Del Monte to made feature films. 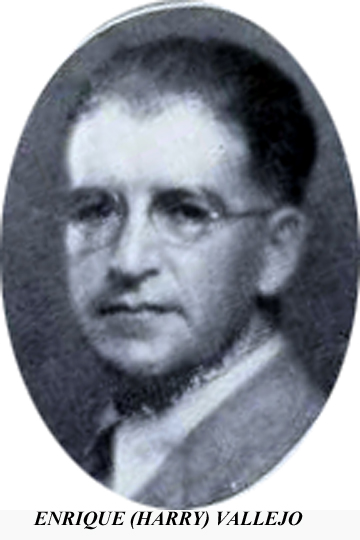 In March of 1930 Enrique (Harry) Vallejo printed an announcement to producers of Spanish Motion Pictures that he was at liberty to act as advisor on motives made for release in America, Spain, Mexico, Latin America and all Latin countries.

Senor Vallejo explained that he was a native of and scion of the famous old family which gave a governor and the name of a city and had been in since before 1907.  He explained that he spoke different dialects of the Spanish language and was an authority on Spanish and Latin-American history and literature.

Because of his background in and his access to people, places, art and other rare treasures, he would be able to prevent mistakes and prejudicial blunders in Spanish pictures filmed in .

When the second election of the Motion Picture Industries, Cinematographers, Local 659 I.A.T.S.E. & M.P.M.O. union, Enrique (Harry) Vallejo served as one of Election Commissioners .

In 1930 while filming a movie in ; was using a courtyard of an old church, a piece of the plaster was knocked off the wall and he discovered that the stone underneath was hand carved masonry.  had discovered an ancient Aztec building in the suburb of . Harry Vallejo was a chess fiend, and plays with a friend in who takes on seven or eight players at one sitting.  Lets go.  (page 16- The International Photographer  January 1930)

Enrique (Harry) , a scion of the celebrated family of , himself a native of our , caught his entrancing vista of the famous shrine of Guadalupe with devotees on the stairway.  It requires a sympathetic and understanding artist to catch the true spirit of these people with a camera. (Cream oth Stills  International Photographer  February 1930)

A Pioneer of the Motion Picture Industry Goes Home to Rest Our Mable Normand in her happier days when she was the biggest and most charming star in pictures.  Here she is photographed in character by Enrique (Harry) Vallejo, Local 659, who was for long her cameraman.  These pictures are engraved directly from the original stills.  Goodbye, Mable; your place in the history of the Cinema is assured. (page 10 - International Photographer  March 1930)