There is an article dated at the bottom of the page but as you read it remember it just a month earlier on that Mabel was so ill she was at the a month later March 20, 1929 she was taken to Pottengers Sanitarium. This might very well be her last party, so lets spend sometime laughing and enjoying ourselves just as Mabel wanted her friends to do.

In 1927 Mabel Normand had retired from the movies for all intense and proposes due to failing health; she had married Lew Cody the year before in a rather unconventional union after a night of heavy drinking. It was frequently reported in the newspapers in 1928 that a divorce was being explored between Mabel and Lew, but living separately seemed to work for them, each living their separate lives in their separate houses with their separate circle of friends.  In 1929 Mabel was ill and had been ill for a long time but she didnt lock herself away in her lovely Beverly Hills home, which she had purchased in 1925; she was still socially active, going to parties, planning vacations, entraining her friends.

The Grace Kingsley column from February 1929 found by my dear friend, the film historian William M Drew has a detail account of the birthday party Mabel and Ona Brown throw for their friend, Doris Deane, who had become the second Mrs. Roscoe Arbuckle right after Minta Durfee obtained her divorce in 1924. Ona was the second wife of Clarence Brown (later Clarence married Mabels friend Alice Joyce, but thats another story). I posted a reprint about the gathering of the ruckus bridge/tea party held at the Hollywood Roosevelt Hotel in 1929 for  January 20th birthday.  You can read the original post at  http://looking-for-mabel.webs.com/1929societycinemaland.htm

The Grace Kingsley column tells that at the party was Vera Gordon and the entertainment included Carolyn(ne) .  Up until now I wasnt well acquainted with these ladies, but part of the fun of parties is meeting new people.  I was impressed with something William pointed out; a female slapstick comedian, Jewish female actress and a black female performer all together, what a wonderful gathering of Divas of Diversity. (Yes, I know Mabel wasnt a Diva, I just like the sound of Divas of Diversity.)

Stella (Grace Kingsleys friend) places the tea at the Montmartre, the Hollywood Roosevelt and the Montmartre are on Hollywood Blvd. within a couple of blocks from each other and a birthday tea party is still a birthday tea party whither they play bridge or not. It isnt clear to me if this was the same party or two different parties as Graces guest list doesnt include any males and the Myra Nye report does plus a number of famous stars that would have deserved mentioning.

When Stella & Grace arrived Mabel was setting at a small table out of the flow of traffic with Vera Gordon, she was leaving the hostess duties to Ona; besides sitting at a little table swapping jokes and gossiping sounds so much more like Mabel.  Grace retold a story in her column that Vera told at the table.  It seems that she had a break between shooting scenes at the studio so went out to get something to eat while still in costume (a funny old kitchen dress).  A woman at an adjoining table at the restaurant exclaimed What an awfully ordinary woman!  And Vera had been laughing ever since after all she was the quintessential ordinary woman on screen but awful!  There she sat with Mabel joking about a vacation trip they were planning to take together.  Mabel told Grace that they were quarrelling over who would pay, each insisting it was their treat, our Mabel laughed that Ill stay another week just for spite!  And as they talked about Vera accent; Vera complained that nobody could understand her. Mabel chirped in, Oh, well, Ill bet they understand you when you offer to pay the bills!  And Vera comically sighed Well, I suppose that if I could talk any better English I couldnt earn my living!

The entertainment was delivered by Carolyn Snowden in an amusing dance and song preference, Carolyn was described as a mulatto showgirl, she had been a regular at 's legendary Cotton Club but now had a show here in and was doing a turn on the movie screen.

Grace in the column did her usual name dropping and some of the ladies are just names to me but they were guest of Mabels and a number were her close friends, so here are the stars that Stella the Star Gazer gazed upon 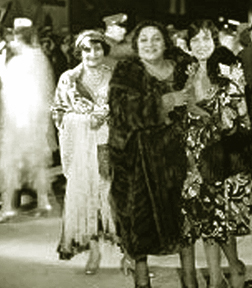 The birthday party was given for Doris Arbuckle who at the end of the fun sat on the floor in a lovely apple-green dress and hat opening her presents; sounds like a nice party, wish we were there. 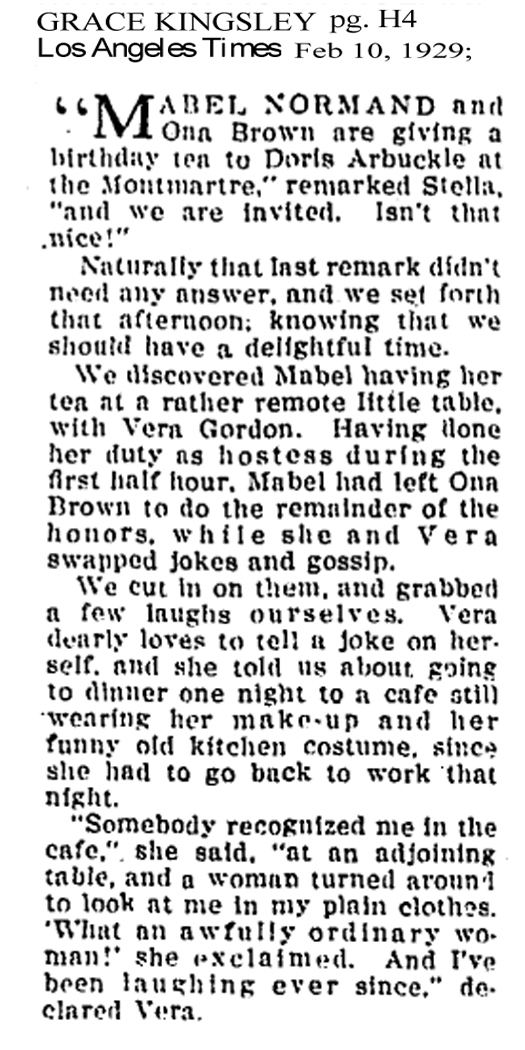 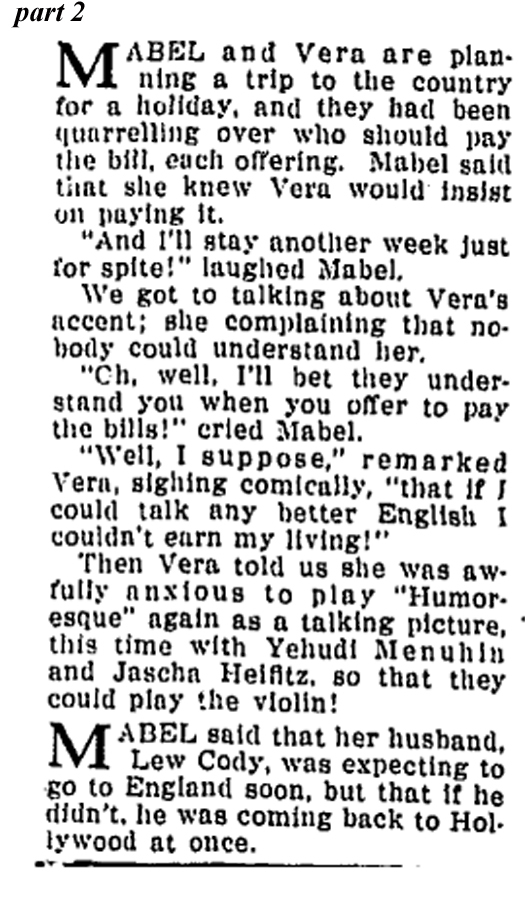 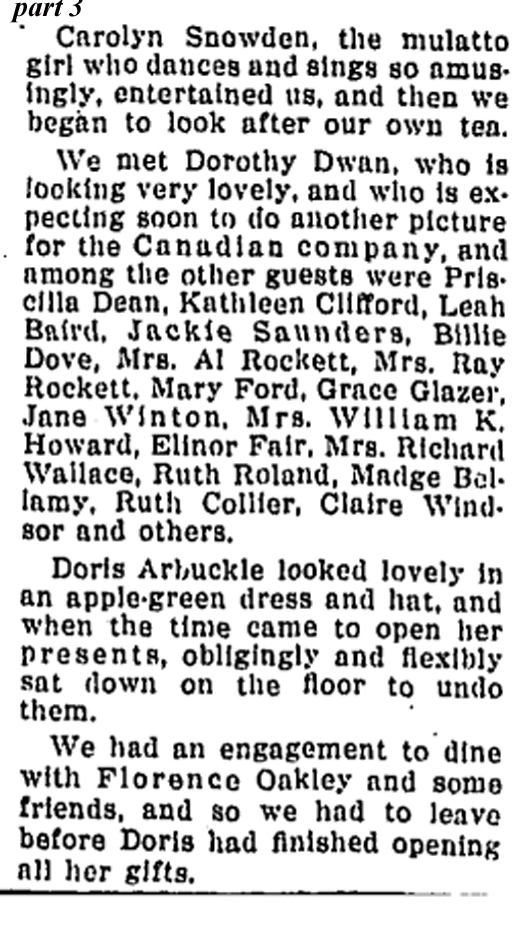 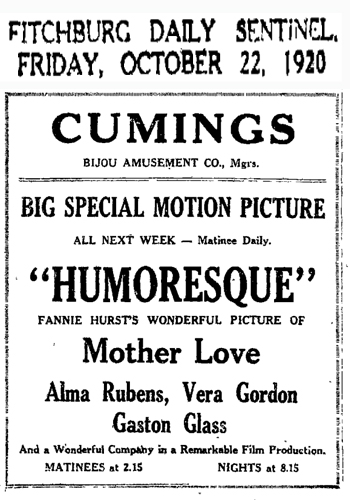 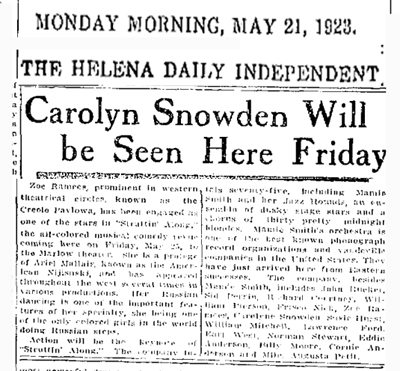 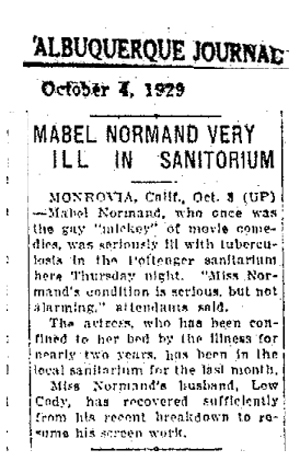 Who was Vera Gordon?

Who was Carolynne Snowden? 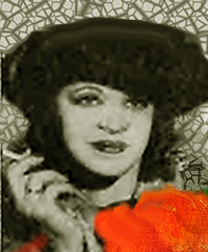