According to Chaplin in the TIME Magazine; In , I entered a restaurant with Mary Miles Minter and other friends. At an adjoining table sat a group, among them Mildred Harris, my divorced wife. One of the men directed a slighting remark at me, followed the jibe with a punch. I retaliated; the fight became general. Other diners rushed in, separated us. Next day I appeared with a bona fide black eye." 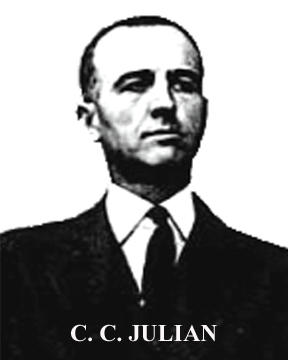 C.C. JULIAN, the flamboyant and sometimes charming promoter of the 1920s; who ran the Julian Petroleum Corporation.  His swindle was as great and complex a scandal as , he was an unscrupulous supporter of himself, an entrepreneur  full of boosterism; speculation; a great lover of business and politics with an infatuation with wealth, whiskey, and glamour. He came to importance during the spectacular oil boom and with his innovative newspaper advertising style he created millions of dollars in a pyramid scheme. It was at the height of his power and wealth that he staggered into the Petroushka Café, Sunday night, .  If he is someone you want to know more about Jules Tygiels book, The Great Los Angeles Swindle: Oil, Stocks, and Scandal During the Roaring Twenties; is still available. 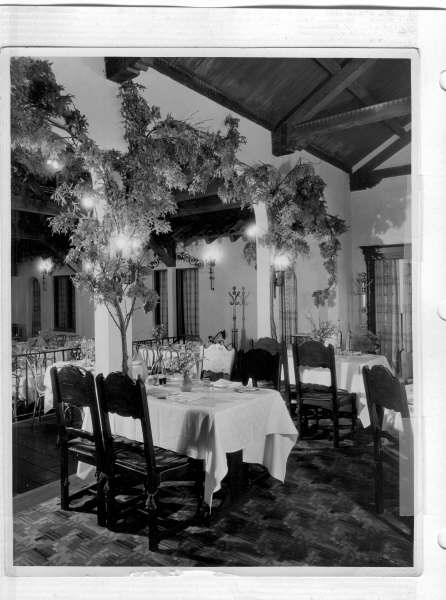 PETROUSHKA Café had the exotic atmosphere with a Russian interior down the street from the on Hollywood Blvd. Mabel Normand had given a birthday party for Mae Busch in 1923 at the . At the birthday party was Mabels friend, Carey Wilson and in January 1924 Carey Wilson was sitting with Charlie Chaplin, with Careys wife and Mary Miles Minter.  The Café was a favorite with the film colony; it was owned by Nat Arlock, run by a Russian Princess Dagmara Saricheva and the Chef was Spiridon Ignatowich, who was chef to Czar Nicholas II for twelve years, the place was crowded. Add to the notables in Chaplin's party, were Nicholas Dunaev, Russian author and actor, as the guest of Prince and Princess Narichkin, and Jascha Heifetz, world-renown violinist.  Dunsev had just returned to from .  Chaplin was listening to the music.  He is very fond of Russian music.  Zamu Lenko, the violinist, was playing; Chaplin was very much engrossed in listening to him.

Around a large party, which included Mildred Harris, Chaplins former wife, and Peggy Browne, a film actress, C. C. Julian and his brother, C. A. Julian and M. A. Roth his personal assistant and another woman came in.  According to all reports the ladies had nothing to do with the ensuing encounter. The Julian party had started earlier in the evening at the Montmarte and it was en-route to the Petroushka according to Peggy Browne that she and Mildred Harris had rather reluctantly joined the party.

Julian was extremely boisterous, colluded with the stage spotlight and knocked over a lamp and did various other damage, on one of his trips about the room; Julian apparently resenting the inability of the adamant and inanimate object to remove itself from the course the newcomer wished to pursue, he hurled it to the floor with a loud clatter and crash of glass. Stepping over the debris of the wrecked spotlight Julian and the members of his party proceeded toward a table next to the Chaplin table. Attracted by the crash and lusty shouts of the new arrivals a corps of waiters and attaches of the cafe rushed forward in an attempt to be of assistance and to smooth the apparently ruffled temper of the guests. "Get out of here!" Julian shouted. "Don't bother me.  What difference does it make what I break up around here?" Fumbling in his pockets he pulled out a wad of bills, fifteen or twenty of them.  They all bore $1,000 on the face.  Waving a handful of the currency above his head he again addressed the assembled aggregation of dumfounded waiters: "Look here!  "I've got money enough to buy out this whole blooming place and a couple more if I wanted to!  Away with you!"

Julian knocked against the chair occupied by Chaplin. Chaplin asked him to be careful, whereupon Julian assaulted the seated bantamweight comedian in the face; whereupon Chaplin arose and with a neat lift-right sent the over six foot, Julian to the floor. Plainly taken back by the comedian's ferocious attack, Julian swung wildly at the agile Chaplin.     He missed, but Charlie connected with another stiff punch to the chin, and the six-footer hit the floor, a stream of blood trickling down his face. By this time the cafe was in an uproar.  Squads of waiters joined the melee in an attempt to restore order. Another member of the Julian party, said by witnesses to have been the oil man's brother, also of athletic build, pounced onto Chaplin's back a moment after the first knockout. Again the film comic brought his small fists into a fast play and felled the second assailant, while cafe attaches struggled to separate the other combatants.

The other guests of the Petroushka cheered, there was a din of shouts, curses, women's shrieks, thud of blows, and crash of furniture, when the fight had subsided, The orchestra started up Aint We Got Fun? Members of the Julian party made ready to make their exit, while cafe attaches began to take stock of the damages, the crashed spotlight, a damaged valuable cello and shattered furniture, Julian was presented with a bill for almost $600 to cover destruction.  Nat Arlock was given a check for $392 to cover supper and damages and on Monday morning $203 more in cash was given to pay for the cello, etc.

Mildred Harris and Peggy Browne declare they left the Julian party just before the fisticuffs started.  Miss Browne said Julian had been threatening to "get" Chaplin in Miss Harris' presence and that Chaplin's former wife pleaded with him not to create a scene. The young actress declared that she and Miss Harris attempted to leave but were observed by Julian and that he gave chase. Frightened, Miss Browne related that the couple fled through a rear door, scaled fences, and ran through underbrush to her home.  When she reached her bungalow, she bolted her door and sat up all night with a revolver in her hand.

And here is the fun part notwithstanding Chaplin's signed statement naming him, and the statement of nearly a score of witnesses C. C. Julian, the oil magnate, strongly held to his denial that he was present or a participant in the affray. He explained that he was in with his wife when the fight took place and was never at any café with actresses and didnt know what people were talking about.  What?!

Mildred Harris, recounting her story of the party, expressed deep regret that her former husband had become innocently involved in the affair. "Poor Charlie," she said.  "I do hope my presence there will not be misunderstood.  I did not know Charlie was there and I am sure he didn't see me. Charlie and I are perfectly good friends.

The Story of : An Illustrated History, The; Gregory Paul Williams