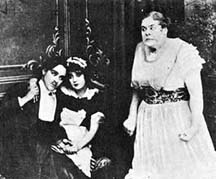 In 1914, while she was filming Tillies Punctured Romance with Charlie Chaplin and Marie Dressler, the Movie Pictorial, 14, ran a story under the headline, "The Rivals."  The studio used a purported rivalry between Marie and Mabel to drum up a little publicity. In fact, there was a real and warm friendship between the ladies, but the story states that: Ever since the day when Marie Dressler gave up being a queen of the stage to become a Keystone comedienne, she and Mabel Normand, the Queen of the Movies, have been bitter rivals...

The article states this rivalries ran even to motor cars, Mabels Stutz Bearcat racing against Maries Fiat with a scheduled demonstration at in but that didnt really happen.

racetrack was the place used in 1914 for the Vanderbilt, Jr.  It was the background for a number of films you have probably seen including Mabels Busy Day and a lot of Chaplin films. The 14 Motion Picture News mentioned that, Mabel was not content with an aeroplane and a Mercer racer, she had also purchased the seven horsepower cyclecar which took third place in the Vanderbilt, Jr., races at Ascot Park, making the fifty miles in one hour and six minutes.  That was the 14 race. "Miss Normand has had the little racer finished in an elegant manner at one of the local garages."  According to the 14 Variety, it was painted with her name in big red letters all over it.

At the end of the year and the release of Tillie's Punctured Romance, Picture & Picturegoer  in a 14 article called Mabel Normand - Keystone Mabel, reported that Mabel acquired a racing motor-car..."as might be expected, this clever comedienne put as much ginger in managing her car as she does into her funmaking before the camera.  To keep a moderate pose in anything she does is a temperamental impossibility for Miss Normand, and it is rumored that she finds it a constant strain upon both her patience and amiability to stay within the speed limit.  When she gets out beyond it is 'Open up and go'.  Though she has confided in no one, her friends at the studio all suspect that Miss Normand is getting into training for the next road race at

On one of her solo trips, the story from Photoplayers Weekly, 15 included a report that Mabel killed a five-foot rattler.  As she was motoring through a canyon south of she caught sight of some flowers and stepped from her car to pick them.  While walking through a clump of sagebrush she heard the ominous sound of a rattler and jumped to one side just in time to escape its strike.  Seizing a stick, which lay nearby, she struck at the reptile and quite by accident she admits, caught it fairly on the head, stunning it.  Picking up a heavy stone, she crushed its head.  In order to prove her story was not of the fish variety she threw the snake into her car and brought it to the studio." Our girl didnt always ride around in the backseat of a chauffeur-driven car.

While on the East Coast, she also drove her own cars, perhaps not racers, but the story told by Wil Rex for the April Picture Play, 1916 called "Behind The Scenes With Fatty And Mabel" tells of what a wonderful place Fort Lee was. that magic town across the from , where murders, 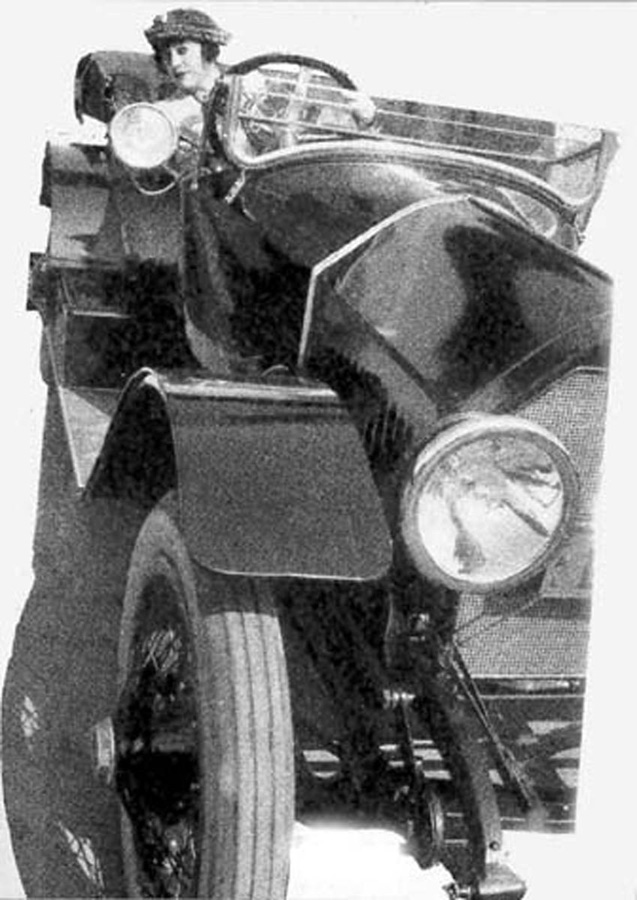 robberies and Indian chases take place while the police force ¾ his name is Pat  ¾  leans yawningly, against a convenient lamp-post.

In the morning, Mabel met Wil at the ferry houses in her racing motor, to drive him up to the Keystone-Triangle Studios   one of the largest glass-enclosed film factories in the East.  He writes that the adventure began on reaching one of the most dangerous spots for a motorist, the hill at where her car started to slip. She told him that the day before she had slid down the hill all the way to the water. She called him a "Fraid cat" and laughed.

Mabel ended up in traffic court only once that I could discover--that was for going the wrong way on the street in and she paid the two-dollar fine.

While the newspaper ran story after story about the Taylor killing, Mabel was living in Altadena away from the press but the Los Angeles Times ran a story about Mabel tooling her heavy limousine up a steep grade on 22. It wrote that her motor died, the brakes didnt hold, and she started to roll backward down the hill towards a cliff.  Mabel was rescued by a neighbor at the last minute, and she was escorted home safely.

s country lanes were also the victim of Mabels driving skills during her 1922/1923 visits.  Mabel said, You should see me motoring around the country. I'm crazy about I love still more the quaint old English country places. 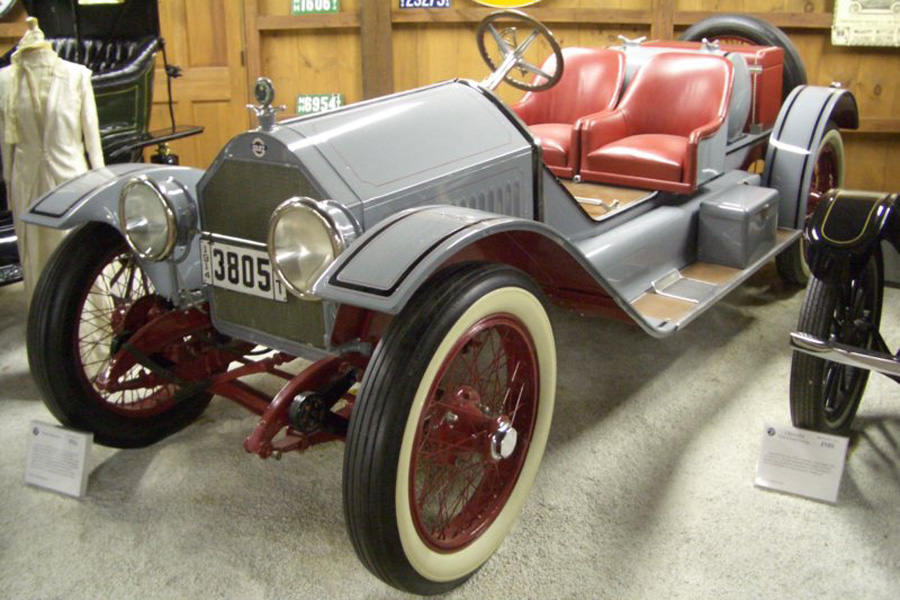 Mabels 1914 Stutz Bearcat was priced new: $2000. The top speed was thought to be only 45+ mph. It used a huge 4-cylinder, T-head engine made by Waukashaw. Each cylinder had over 100 cubic inches. Known as the first sports car in the scant-body and scant-comfort idiom, the Bearcat was designed by

Harry Stutz to be a masculine machine from the drawing board.  There was a rumor that he designed clutch springs so stiff that supposedly a woman could not operate it.  If Mabel could drive it,  this statement was  proven untrue.

Mabels 1916 Mercer was a high-quality motor but was produced only in small numbers. Talented designers and race drivers contributed their efforts to focus on the Mercer's quality by creating competition during the many road races during that period.

The result was one of the most acknowledged sports cars of the decade: the 1910 Type- 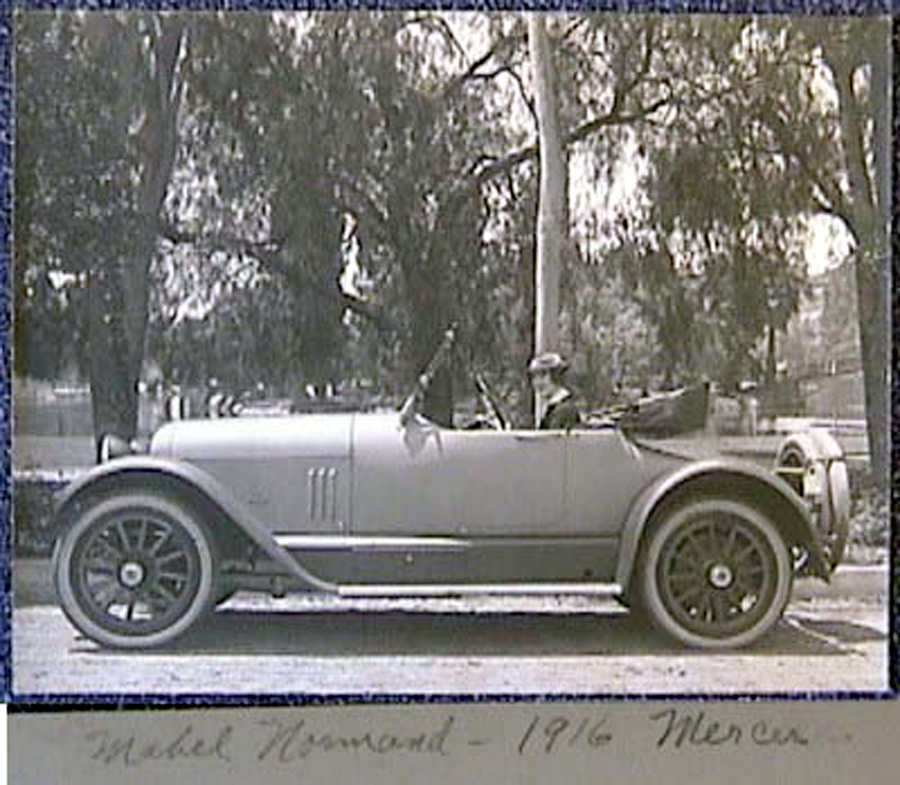 35R Raceabout, a stripped-down, two-seat speedster, designed to be "safely and consistently" driven at over 70 (it was capable of over 90 ). The Raceabout's inline 4-cylinder T-head engine displaced 300 cubic inches and developed 58 horsepower. It won five of the six 1911 races it was entered in, and hundreds of racing victories followed. The Raceabout became one of the premier racing thoroughbreds of the era- highly coveted for its quality construction and exceptional handling. Mercer produced its last vehicles in 1925, after some 5000 had been built. 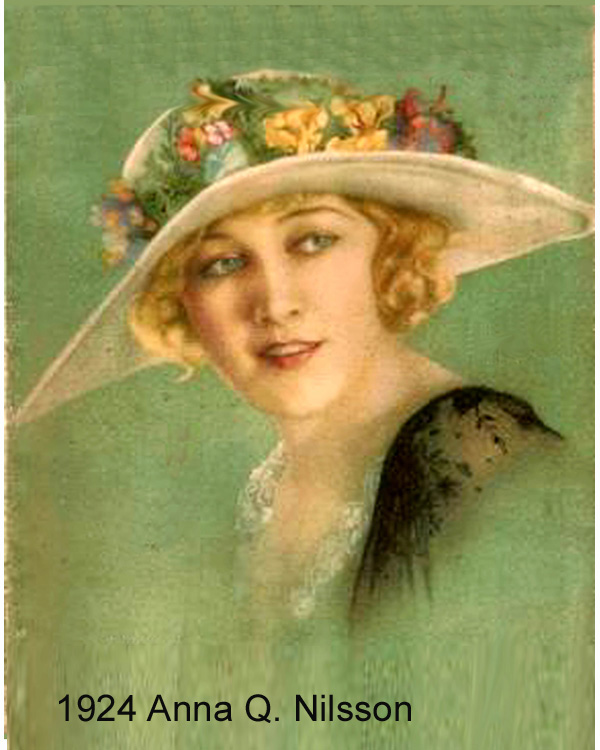 Dan Sutton, the local Buick dealer, announced that Anna Q. Nilsson, now a Van Nuys resident, had been given a new Buick coupe as a Christmas present by her husband.

"In the Buick yards they have a Mercer roadster of ancient vintage that formerly belonged to a noted moving picture actress who has a record for speeding.  The old boat is pretty well knocked to pieces but is still full of speed and good for 70 miles even in its junked condition, so they say."

Mabel Normand owned a Mercer in 1914 and we could speculate 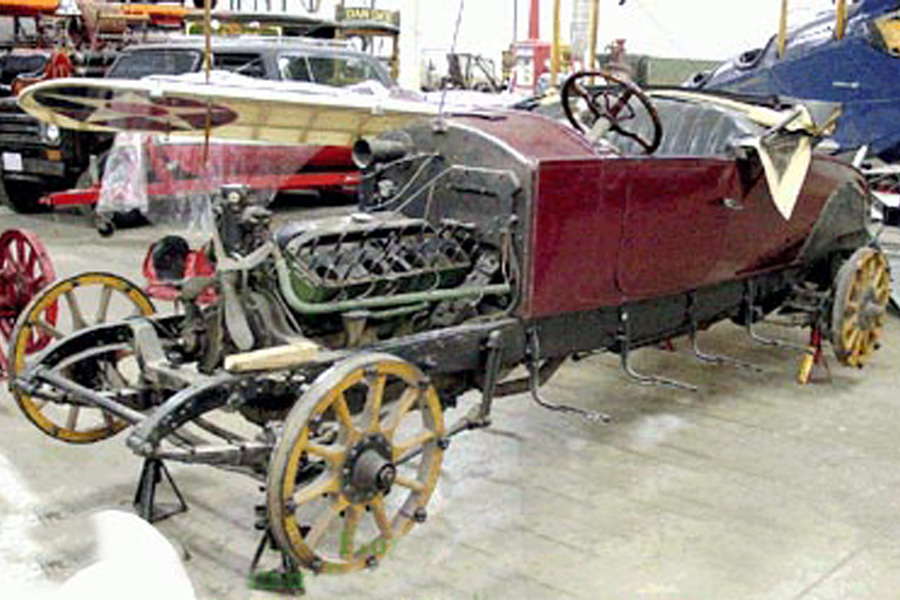 why the name of the film actress of the Mercer at Dan Sutton dealership was withheld, which is always fun.  January 1924 was during the whole mess of the Cortland Dines shooting.  The newspapers were full of Mabel, but it was negative publicity and obviously wouldnt have added anything positive to the story about Anna Q. Nilsson's new Buick.  As long as the speculation is just speculation, wouldnt it be delightful if someone had restored Mabel's little Mercer? It is such a classic style.  At one point, Mabels custom-built Mercer Runabout with a "dressing table and makeup mirror that folded into her car door" was on display at the Hollywood Museum of Autos, according to Sam Peepless, "Madcap: The Story of Mabel Normand, Part I," Classic Film Collector.

There is a lovely story told by Mack Sennett to Cameron Shipp in the book, King of Comedy. Mack was making money at Keystone and spending it, too. One of the purchases he made was a $6,000 red Fiat which Mabel borrowed and stripped the gears on a drive to .  Mack tells it much better than I do. According to him

Miss Normand, who couldnt drive anything more complicated than a small nail, clapped her big brown eyes on the new Fiat and decided I was the boy next door after all.

Can I drive it, Mack? Please! You know me, Im as careful as an old lady, and when I hit people I practically almost never maim them permanently. Mack, Ive just got to drive that big automobile.

I couldnt think of anything prettier than Mabel Normand behind the wheel of that car. Mabel returned four hours later, her big eyes were as innocent as a small girls and she came over and sat on my desk and swung her legs and rumpled my hair and grinned at meMack, the damnedest thing, you do have an exceptional talent for picking bum automobiles.  That Fiats insides just werent any good and I hadnt got even to Santa Monica before there was some terrible egg-beating noises and some weak kind of put-put-puts and the car stoppedShe was the most gorgeous thing you ever saw, and what did I need with a Fiat?

In Mack Sennetts 1919 Will, one of the clauses states that his two Packards should be given to Mabel (along with 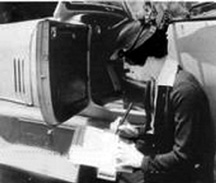 William M. Drew, the film historian and Pearl White biographer, about ten years ago wrote a particularly insightful article called The Speeding Sweethearts of the Silent Screen (1908-1921). In his article he draws the parallel between the social development of the womens movement and the movement of women in automobiles. There is a lot of Mabel in it, too.

There were Airplanes (aeroplanes) too, anything fast and powerful anything with horsepower, even horses were of special interest to Mabel.  Julia Benson, Mabels companion and friend, hated to ride in the car with Mabel driving as Mabel would drive with her foot all the way to the floorboard and the speedometer as far to the right as the needle could go. If Julia ended up riding with Mabel, it was only with her rosary clutched tightly in her hand. 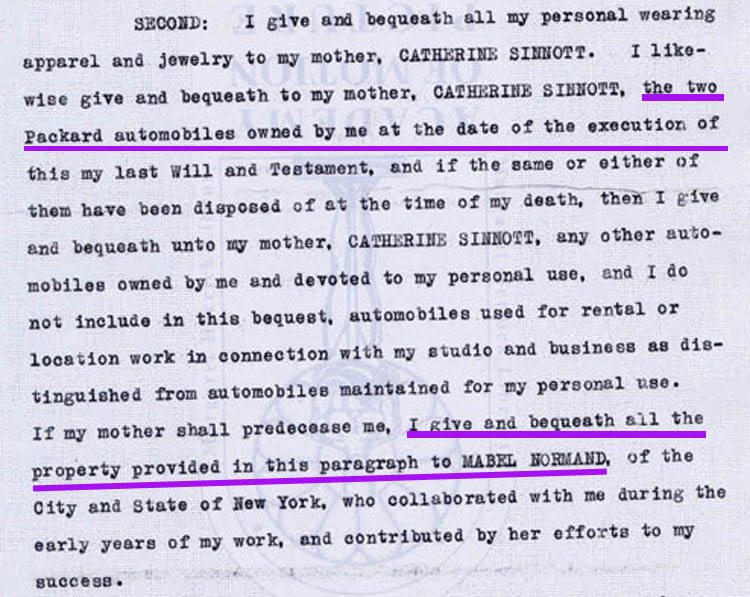 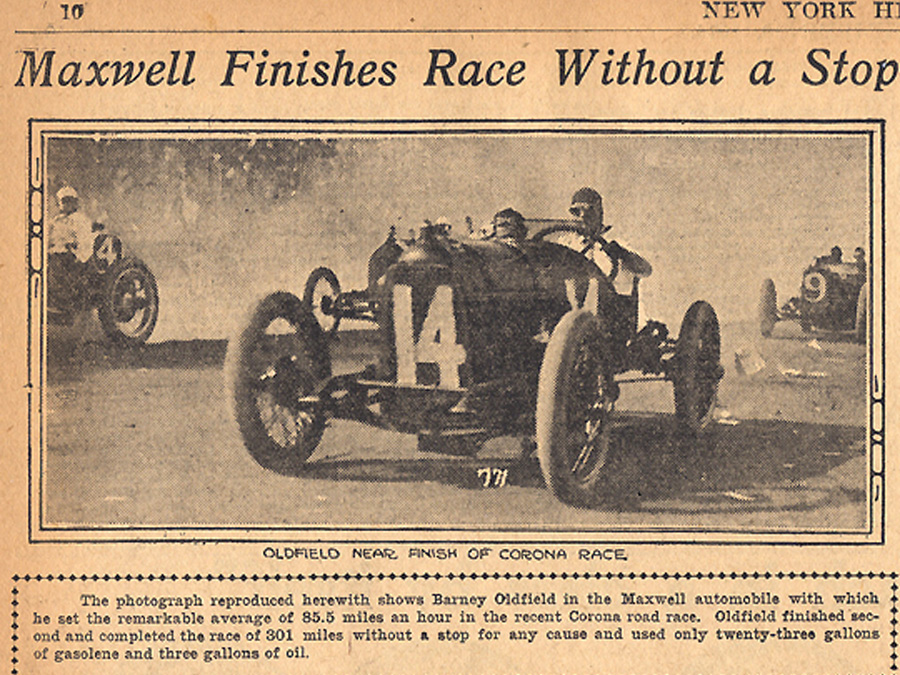 This photo is of the 1914 crash in Santa Monica, California during the

300 mile Roadrace, just 2 days after this crash the same car 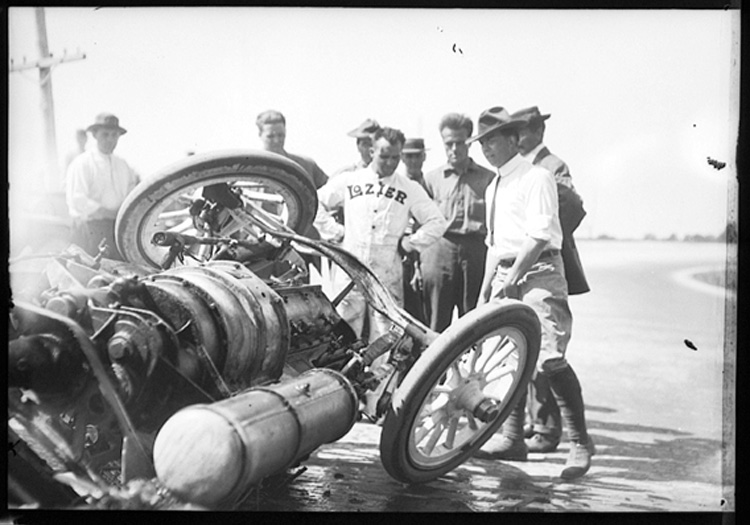 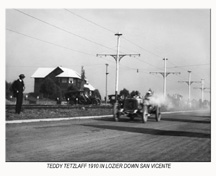 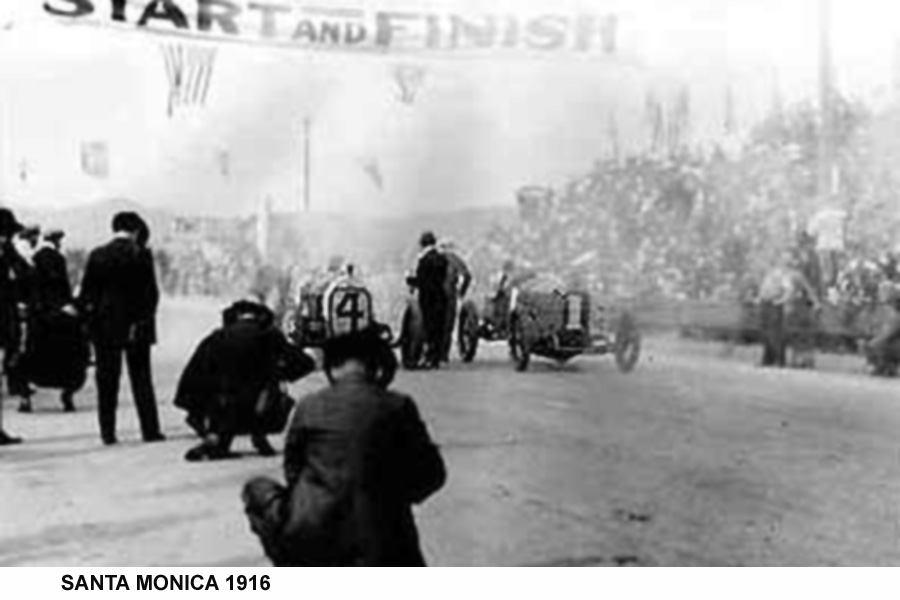 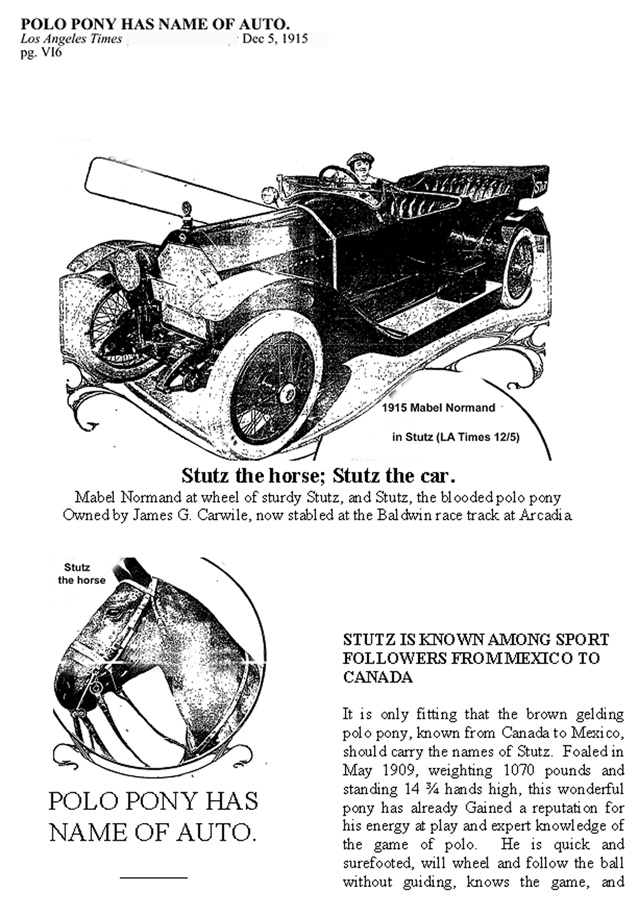 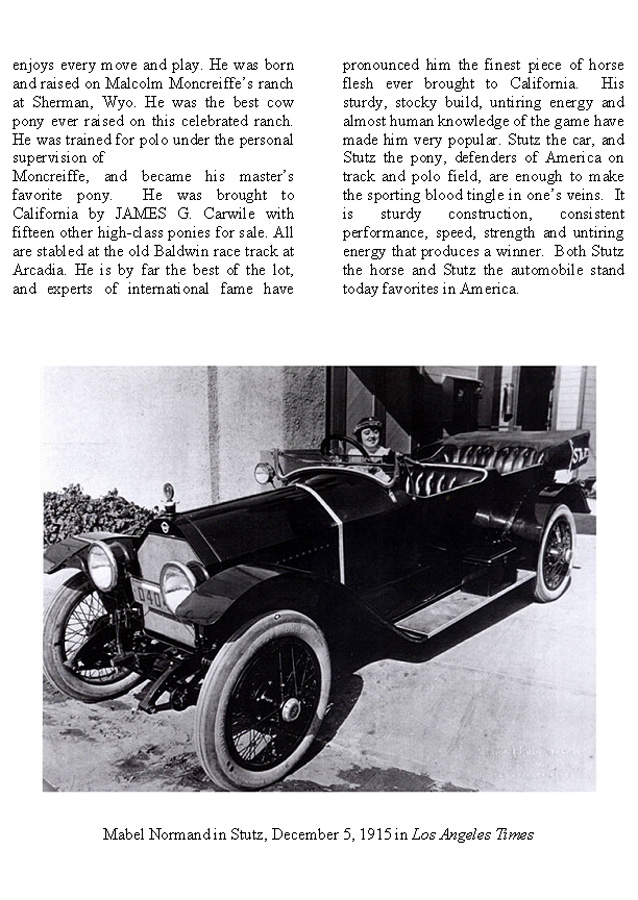 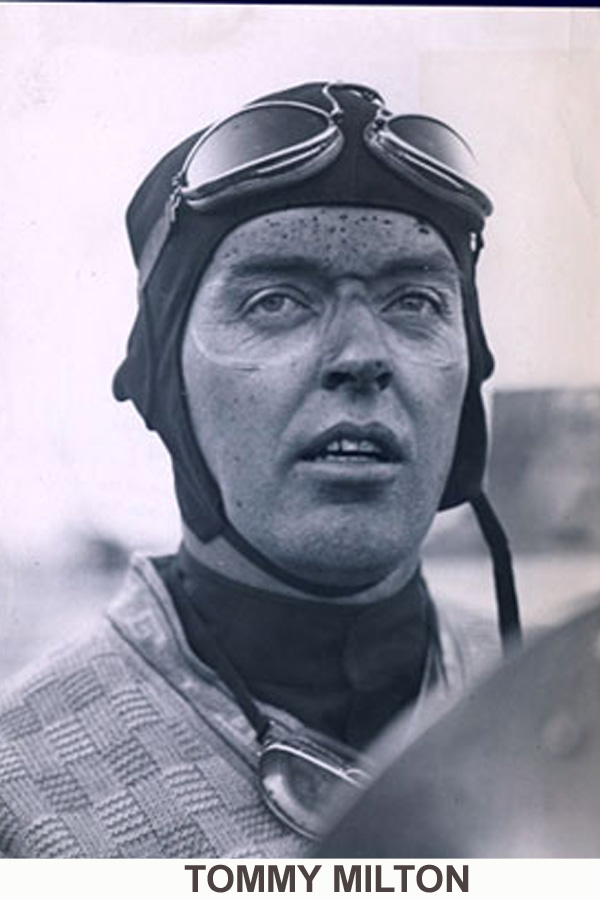 On 14, Beverly Hills was incorporated and the Beverly Hills Speedway was built in 1919. Opening on 20, it cost about ½ million but only lasted 4 years, closing on 24.  The project was developed by a syndicate of actors. The lima-bean field was purchased at $1,000 an acre.

It was a four turn banked oval made of 2-by-4s by Jack Prince. The wood was inexpensive and eliminated the dust connected with racetracks. The track was only one and quarter miles and the banks were 37%, it had a 70,000- seat stadium. 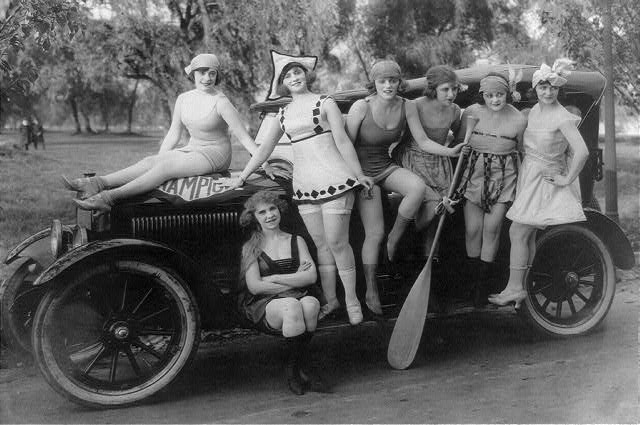 It was the site for a number of airplane programs, not just racecars.  Mabel must have loved it.   The covered some 275 acres, today it is the site of the , and with the northern curve currently is the location of the Beverly Wilshire Hotel, in a photo of the the Eucalyptus trees mark the northern border of the track at The hotel was not 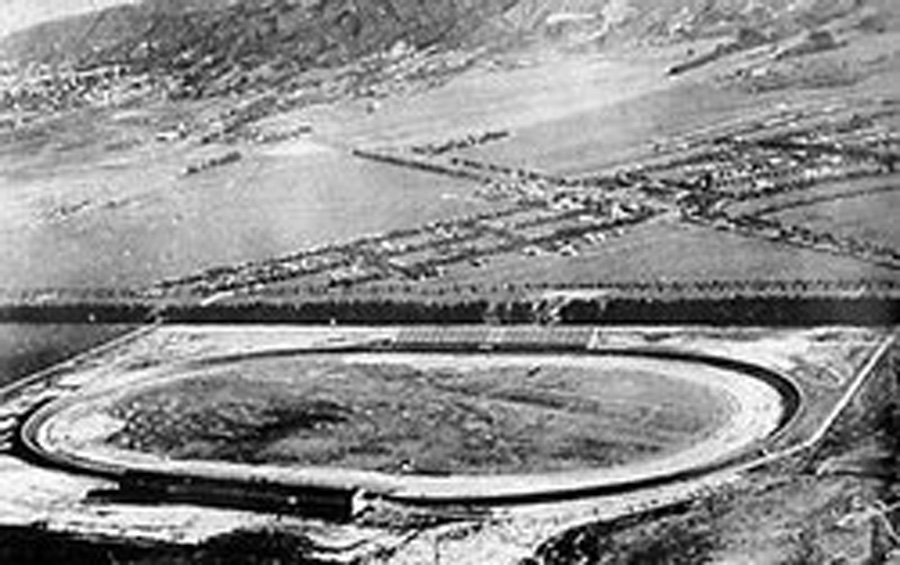 constructed until 1928. This track was only second to the Indianapolis Speedway in its day.  By 1924, the stadium was demolished, as the land was too valuable to use as a racetrack the final race was viewed by 85,000 people.  The developers moved to near Studios. The speedway was built at a time when car races were