First the disclaimer, I know that you probably know far more about Hobart Van Zandt Bosworth than I do; but that usually doesnt stop me.

Bosworth is essentially an artist as well as an actor. 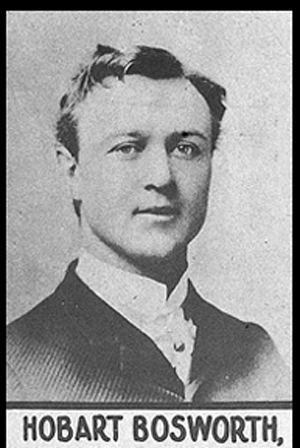 What I do know is that Hobart Van Zandt Bosworth was born in on .  As a boy Bosworth lived along the .  His father had been a naval officer during the Civil War and was a descendent of Miles Standish.  On Bosworths mothers side the Old Dutch settlers of .  He secured his commission for the but at the age of 12 he set sail from on an old merchant sailing ship on a whaling trip in the and was before the mast for three years.  He boxed, and wrestled, and according to one article nearly starved while living in .  For 6 months he worked as a ranch-hand learning horsemanship.

Thinking he would like to become a landscape painter, a friend suggested that he work as a stage manager to raise the money to study art.  In June 1885 he went on stage with the McKee Raukin Stock at John McCulloughs old theater.  By 1887, he was acting at the Alcazar Theatre in . While with the stock company in San Francisco Bosworth as stage director; he had the usual experience of travel on the Pacific coast until the spring of 1888, when he joined Mrs. D. P. Bowers and company.  Eventually, he was pressed into duty as an actor in a small part with three lines. Though he botched the lines, he was given other small roles. Bosworth was eighteen years old. At the age of 20 he played MACBETH he laughing commented that he was unquestionably the funniest MACBETH that ever played the part.

After a trip through with Herman, the magician, as his stooge; Bosworth joined with Augustin Daily in stock in and he remained with Daly for ten years and he was leading man for Julia Marlowe, Henrietta Crosman, Amelia Bingham and Mrs. Maddern Fiske.  It was during this time that Bosworth made tours to , , , and other European cities with the Daly Company. He was at the zenith of his stage fame with Mrs. Fiske while still with the Daly Company his health gave way in 1900 and he was pronounced tubercular.  For the following nine years he had a constant struggle; he did a little work here and there, for the most part he lived in a tent in , and Pacific coast; reading and painting. When Lewis Stone was leading man and Victor Schertzinger was orchestra leader in Belasco Stock Company in Los Angeles Hobart Bosworth was the stage director; working when his health permitted.

In the spring of 1909, Frances Boggs was established in and Bosworth made his first appearance on camera. However, Kevin Starr in his 2005 : A HISTORY repeated the myth that IN THE SULTANS POWER was made in 1908.  Bosworth was a colleague and friend of Boggs, after Boggs' murder Bosworth have an impassioned plea that a memorial to Boggs should be created; Boggs was a great man in all respectsand too little credit is given him as a pioneer in our new art.  Robert Birchard, the film historian has done extensive research on Boggs contribution to movie industry.

More on Bosworths IN THE SULTANS POWER the film that earned the reputation as the first movie made entirely in California, if not completely true pretty is nearly true it was released June 17, 1909 before the other films shot at the Olive Street studio.  Bosworth was in his early 40s and played a French soldier, the hero.  Bosworth at first was insulted at a proposition to appear in the flickering screen endeavors of the time.

The salary which he was offered, $125 for two days work was more that he had received for a weeks work on stage and he was assured his name would not be publicized  so he accepted.  On the second day of shooting Boggs told Bosworth that Thomas Santschi, another actor would double him; Bosworth objected, If I am to be the leading man in this picture, why cant I do the leading man things?  Boggs replied the hero is just the fellow who always gets the girl.  Bosworth held his ground, pointing out he had been a sailor and boxer; he won his argument.

In the entry in Bosworths diary, he wrote:  All Saturday and yesterday, I acted as leading man before a kinetoscope, a strange but not unpleasant experience, and I look forward to seeing myself act when the films are given here.   The picture, is sometimes referred to as IN THE SULTANS POWER or IN THE PALACE OF THE SULTAN or THE PALACE OF THE SULTAN a two-reel thriller; Stella Adams plays a French girl rescued from a Turkish harem by Bosworth. He was with the

Selig-Polyscope from its beginning on the Pacific until 1913.

Bosworth never felt satisfied with the superficial presentation of plays on the screen; to him there was a lack of depth and of soul found only in the spoken work and personal action.  He became president of Bosworth, Inc. which made a specialty of Jack Londons stories.  He went to , where he evolved the idea of blending film and action in a twenty-minute sketch that embodies the tensely of a four act tragedy.

Bosworth along with Dustin Farnum, Samuel Goldwyn, Cecil B. deMille and Jesse Lasky created Famous-Players Lasky.  Bosworth was more interested in acting than the business of movies.  The others became millionaires and Bosworth a painter, he was considered one of the most talented painters in the in 1913.  He was able to ride his horse almost everyday along the bridle paths of

When Bosworth appeared in THE SEA WOLF he opened the motion picture with a prelude  a sort of vignette introducing a one-act play, presenting the essence of Jack Londons masterpiece including a tribute to his production in Jack Londons own handwriting.

Bosworth by 1916 was working at Universal with a years contract and then there was time at Lasky Films playing with Geraldine Farrar in JOAN THE WOMAN and other movies, Bosworth while working with Mae Murray under the direction of Robert Leonard had his 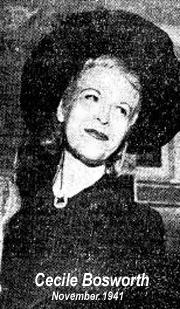 right foot crushed; in the Fall of 1917 Bosworth was in the East with his interpretation of Wolf Larsen in vaudeville without scarcely a chance in the lines of London, Bosworths beloved and inspired friend.

And Bosworth painted landscape and acted on screen and on stage and when he was 52 he married a 25 year old widow with a small child, an article on the front page of the  The San Diego Union, the story ran that Hobart Bosworth married Cecile Kibre Percival.  They came down from for the wedding; Lacy D. Jennings tied the knot.

When Bosworth stood up before the judge with the woman of his choice, he carried one of his hands heavily bandaged. Hurt it in an accident he said. Cecile Kibre Percival was employed at clerical work in the Ince studios where Bosworth had been working.

Bosworth was married once before.  His first wife was Adele Farrington, well known in the film industry, they were divorced in 1919. Hobart Bosworth died of pneumonia in , aged 76. He was survived by his second wife, Cecile and his stepson George. 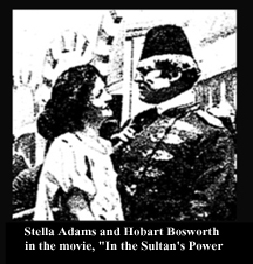 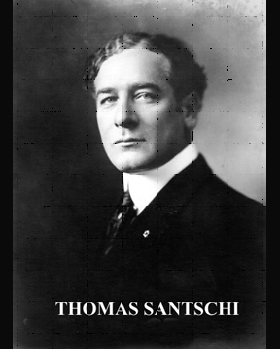 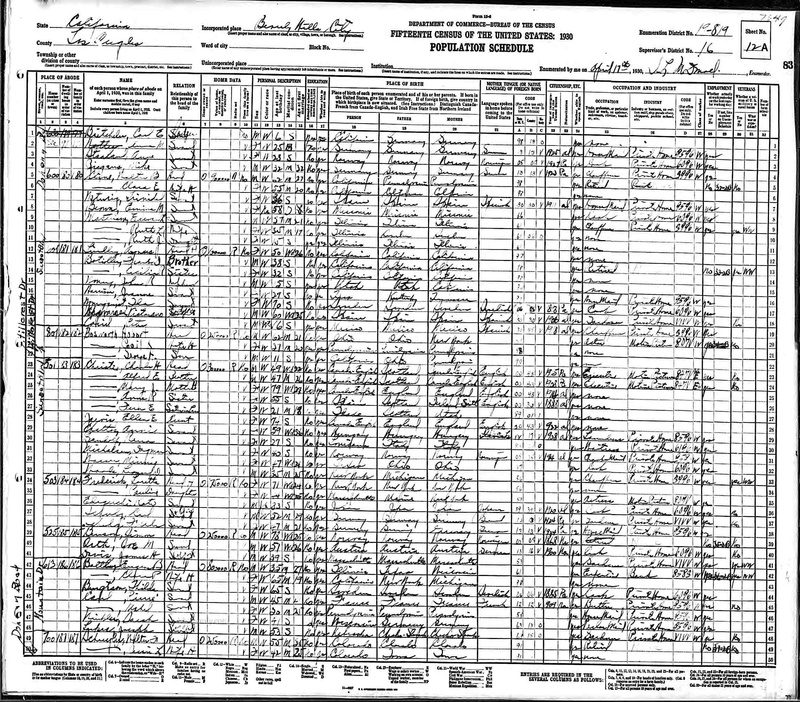