Audrey Munson in 1916 made what is believed to be the first Nude movie called PURITY, here is the link

The Huffington Post ran an article by Todd Van Luling on 8 Things Even New Yorkers Dont Know About Their City; one is the face of the city: Audrey Munson.  In the section was a hyper-link to Looking-for-Mabel 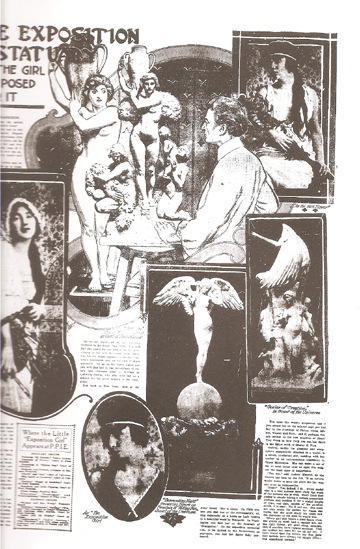 When I made a trip to this past Spring, I hoped to find a statue by Furio Piccirilli called Rain but it was not at the Panama Pacific International Festival museum in . Audrey Munson wrote in 1921 a serialization of the story of her life as a model; in one article she said that on a sculpture that was sent to the 1915 Panama Pacific Festival was a combination of Mabel Normands body with her face.  The article showed a picture reported to be of Mabels nude body.  One of the problems in locating the statue is the name that Audrey calls it Rain but the newspaper images of the work looks like it is only part of a larger piece.  I know that Piccirilli did a series Spring-Summer-Autumn-Winter; Mabels body might be part of any one of these. 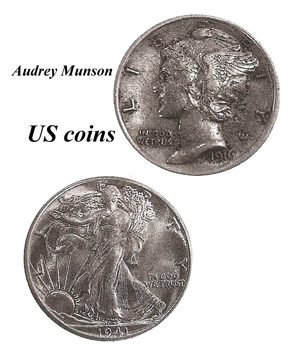 People know Audrey Munsons image but not necessarily her name. If you live in the , I am pretty sure you have own a bas-relief sculpture of her; she is the Mercury Dime and Walking Liberty half dollar.

If you live in , her image looks down on you.           Audrey is the figure over the proscenium at the New Amsterdam Theater; figure on top of the Manhattan Municipal Building; both Brooklyn and Manhattan at the entrance of the Brooklyn Museum of Art, NYC; Memory and Mourning Victory at Metropolitan Museum of Art, NYC, and so many, many more: The Nameless Face of New York. 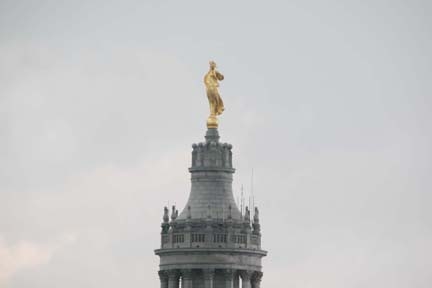 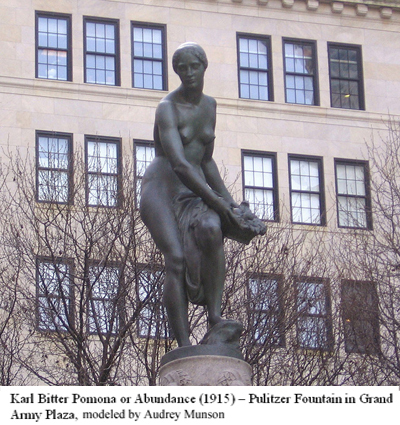 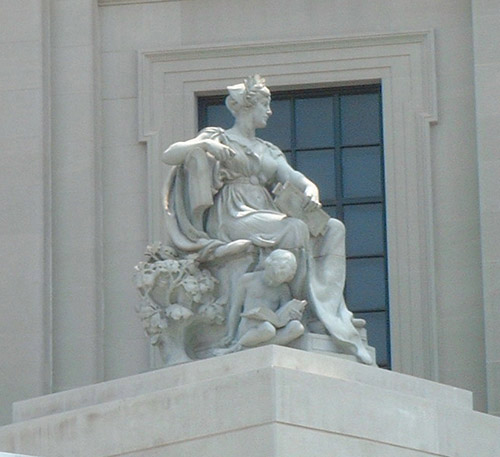 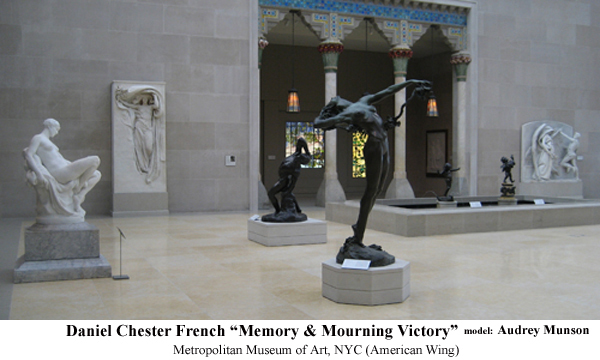 Audrey Munson made 4 silent movies and there are hundreds and hundreds of paintings and sculptures that her face and figure adorn... In 1920 the newspaper referred to Olive Thomas as another rival of Audrey Munson, (Audrey was 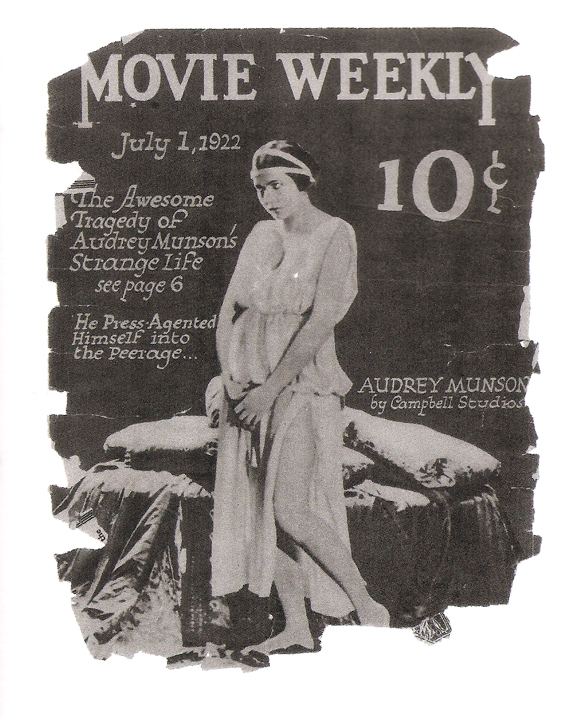 there first) the most beautiful woman in the world.

A biography was written "'s Venus" by Diane Rozas and Anita Bourne in 1999, 2004 Andrea Geyer created the Queen of the Artists Studios, the allegory and also in 2009 a play mounted by Elaine Kuracina. There is easy to find material on the internet, I read the 20 part series that was printed in 1921; at the Smithsonian collection, not an easy read. I found the biographical entries on IMDb, Wikipedia, etc are pretty much all the same.

There is something incredibly sad about the Walking  being locked away for 65 years.

What I found is that she was a model in the early 1900s, made her first film in 1915 (appearing nude) she was involved in a murder scandal 1919, she tried to work in vaudeville and in 1921 she made another try at making movies but the new censorship had made her nude screens in Heedless Moths hard to market,

she was even arrested for public indecently. 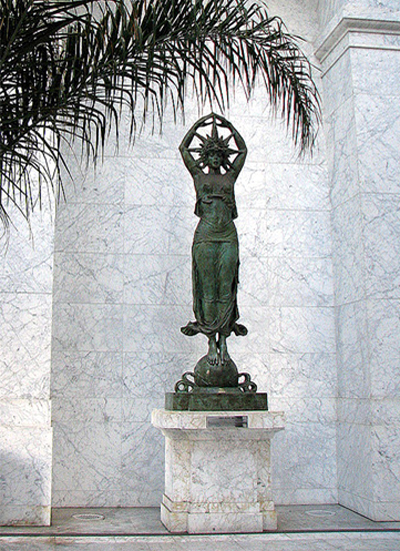 Audrey posed in movies; she didnt actually act after all the transition of posing for the artist to posting in front of a moving picture camera wasnt so big a change.  At the beginning of movie-making, people were said to pose; the camera just took one picture after another and tricked the eye to suggest movement. It was like an automatic flipbook. Story telling by pictures is tens of thousands of years old, going back to cave paintings.

By 1922 she was 34; was reported to have a drug problem, her career had ended, and tried to commit suicide.  Curious that Audrey Munson tried to end her life in 1922 with the same substance Olive Thomas ingested with such dire results; the Mercury Face using Mercury.  She was committed to a psychiatric hospital for schizophrenia in 1931 and there she died in 1996 at the age of 104.

The Girl Beneath the Gilding  - New York Times

QUEEN OF THE ARTISTS STUDIO

When Piccirilli conceived his famous RAIN for the exposition at he wished to make his feminine figure representative of the sense-soothing quality of a gentle downpour from the heavens.  Rain is not delicate, nor dainty, nor does it suggest firm, reserved lines.  Rather it suggests fullness soft curves, beauty that is enticing.  Lady Constance, with her slender lines and taut muscles, would not have done for his model; but Mabel Normand, whose figure was similar to the perfect thirty-six of the cloak and suit makers, and who might have been a modern Venus, was just the type he wanted.

So Mabel Normand was chosen by Piccirilli for his model.  In those days Miss Normand was earning but fifty cents an hour, and while she was very popular and conscientious as a model, was not used as often as others whom figures were more of the ideal.  She had come over from to seek a career among the studios and was struggling hard to keep serviceable shoes on her feet and achieve three meals a day with anything like regularity.  Through all her scuffles she was bright and cheerful, full of fun, and always prompt and willing to work long hours if an artist was hurried.

Where in modeling Lady Constance, Prince Troubetskoy wished to avoid any suggestion of flesh, Piccirilli in doing Rain, wished to suggest it frankly  almost to exaggerate it.  Mabel Normands body was done in the sketching clay into that of a siren, a beautifully rounded figure that seemed to glow with life and vivacity.  She has Spanish blood, and her entire physical personality glows with Latin warmth of impulse and emotion.

But when the figure was completed Piccirilli was not satisfied.  He had fixed an impression of voluptuousness  such as he believed a rain storm created  yet the spiritual, inner expression of noble thought and purpose seemed to be lacking.  The face he had modeled seemed too merry.  He sent for me, (ed. Audrey Munson) and, destroying the clay sketch of the head and face, made a sketch of my face.  Thus his completed statue was made of two models  Miss Normand for the body, me for the face.  He professed to find in my features that which he wanted to elevate and purify his statue.  When I took the pose he wished he asked me to think of myself as being a rain storm, saddened by its damp caress because it suggested tears to me, yet held fast by the inexplicable spell which the rain threw about me.  My interpretation of this command is what is pictured on this page in Piccirillis statue.

The completed worked won much favorable comment at .  The artists conception was widely discussed, and his interpretation of rain as a siren in body but of noble soul was considered daring but correct.

I do not mean to be understood that Miss Normand was unable to portray to artists the nobler character which the real artists always want to put into their works.  Some sculptors found in her face, in the droop of her eyelids or the curves of her mouth features which were especially attractive to them.  Her chief asset as a model was her ability to catch the mood of the artist and translate it for him, but it had to be a merry mood.  Miss Normand could only pout when she should be sad and thoughtful.  Her pout on the movie screen has earned her a million dollars or so; as a model it cancelled many posing engagement for her.

But in her merriment Miss Normand was typical of those models, many of whom later became famous as movie stars or stage beauties, who frequented the Tenth street studios of which I have spoken  studios occupied by such men as William De Liftwich Dodge, Gutzon Borglum, MacMonnies, Koni, Weinman, Daniel French and Robert Aitken.