PHOTO PICTURES MABEL NORMAND, WHO AT THE TIME OF THE [WILLIAM] DESMOND TAYLOR MURDER WAS AT THE HEIGHT OF HER CAREER, BEING QUESTIONED BY ASA KEYES (RIGHT), AT THAT TIME DISTRICT ATTORNEY OF LOS ANGELES COUNTY, BETWEEN THEM IS SEATED MILTON COHEN, MISS NORMANDS ATTORNEY.  MISS NORMAND WAS EXONERATED.  KEYES NOW IN JAIL AWAITING APPEAL FROM CONVICTION OF BRIBERY AND CONSPIRACY HAS FROM HIS CELL ACCUSED FRIEND , FORMER GOVERNOR OF OF SHAKING THE BONES OF THE CASE FOR POLITICAL PURPOSES. (LK-12/23/29  MIS6. R.WEST) CX

Asa Keyes is a character in the William Desmond Taylor saga; a key player in a number of stories.  The picture of Mabel Normand, Milton Cohen and Asa Keyes was taken in 1922 and by 1929 was merely an echo of a story told and re-told.

A little background, Keyes was born in . Harry Carr the columnist reflected that he had gone to school with Keyes at and that Keyes was not a scholar but rather a careful slow minded trial lawyer, who became poisoned by politics.  Carr wrote that Keyes turned out to be one of the finest lawyers in the District Attorneys office; prosecuting some of the nations most famous criminal cases until the power of money overwhelmed him.

Asa Keyes became the 28th district attorney of , succeeding Thomas Lee Woolwine on . He actually was elected in 1924 his term ending .  when Buron Fitts was elected.  In the years that Keyes was DA, he is reported to have gone from a competent prosecutor to a corrupt politician.

It was the Julian Petroleum Swindle that finally brought to public awareness the Keyes involvement in the culture of corruption in the DAs office when the Julian corporation was acquitted; there was evidence that Keyes had been bribed. On , a jury convicted Keyes and two co-conspirators to five years. 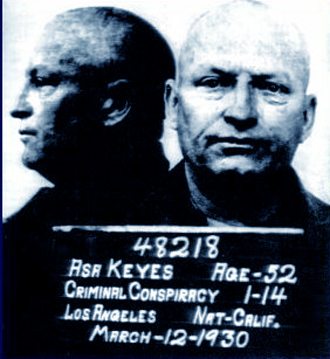 It is hard to know how many bribes Keyes took.   It is suspected that Aimee Semple McPherson prosecution for fabricating evidence was dropped in January 1927  because of a payoff.  It was believed that Keyes was on the payroll of a number of local crooks, in the business of the usual; sex, drugs and violence anywhere that money could be made outside the law. Keyes petition for appeal of his sentence with the Court of Appeal which was rejected on .

, when Ex-Governor Friend W. Richardson, in an exclusive interview with a representative of the San Francisco Call-Bulletin, exploded what the newspapers later referred to as a "detonating political bombshell,"  and dragged the 8-year-old mystery from the records once more.  "I know who killed William Desmond Taylor," said the former governor.

"A motion picture actress killed this director, and I have positive proof to this effect."  This is why the Chicago Tribune ran the picture; the implication is clear.

Keyes from his cell issued a statement:

"If has the proof why doesn't he produce his evidence now?

The murder happened in when Thomas Lee Woolwine was District Attorney, and while Buron Fitts and I were both deputies in his office. No stone was left unturned then or since to uncover the secret of the murder.  The murder of William Desmond Taylor investigation continued; finally the DA's office marked the case as closed in December 1929, but it has never closed as long as the murderer was never found.

"Time Magazines issue of , reports: In the five years he was District Attorney of Los Angeles Asa Keyes (pronounced Kize)sent 4,030 men and women to California prisons for every variety of crime. Last week he joined this criminal company himself, entered San Quentin Prison as a convicted bribe-taker, a betrayer of public trust. Keyes was pardoned by Governor James Ralph in August 1933. Asa Keyes health broken by his conviction and the 19 months he spent in San Quentin after his release became a car salesman, selling 2 cars to Mabel Normands husband, Lew Cody. He also was general manager of a bail bond company for a short time; he was drinking heavily.

Harry Carr wrote in 1934 that Keyes was employed in motion pictures.  Then came the cycle of trial pictures and the men behind the gun had an idea. Why not let a real lawyer, like Keyes, play the losing lawyer in the court scenes. His voice was good microphone. He knew the legal phraseology. So Keyes made more than pin money, but his back was always to the camera. Only once did I see him turn. That was recently only for a fleeting instant.

So it was that on , United Press transmitted a dispatch from ; Asa Keyes, age 57 died of a paralytic stroke. Keyes was mourned by Lillian, his wife and two daughters, Elizabeth and Mrs. Fred McGuire.

1952, Charles Hamilton; Men of the Underworld: The Professional Criminals Own Story,

2001, Dennis McDougal; Privileged Son: Otis Chandler and the Rise and Fall of the Times Dynasty.