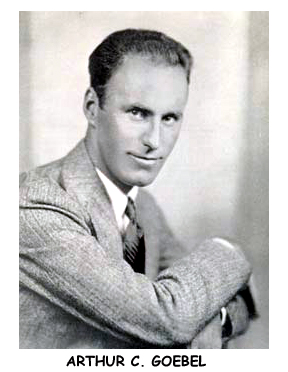 COLONEL ARTHUR C. GOEBEL (1895-1973) was just 35 in the year Mabel Normand died; he was one of the "Thirteen Black Cats of Hollywood," movie stunt fliers, a big and handsome World War I flier.  In 1929 his autobiography Art Goebels Own Story was published, he represented Mabels link to the heavens as one of her pallbearers. He didnt fall from the sky like so many of Mabels other flyers as young men but died in 1973 full of years.