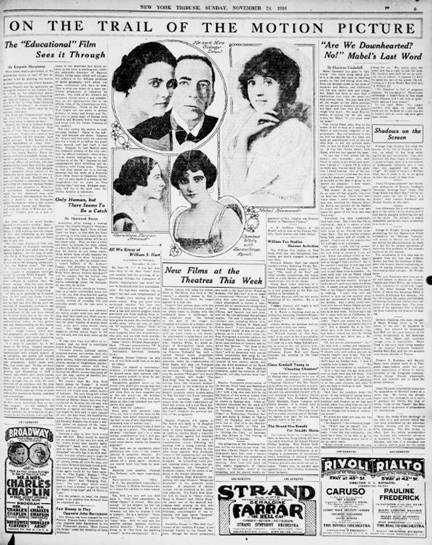 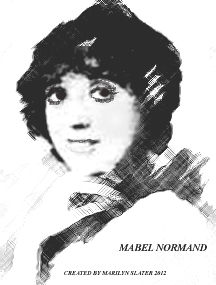 Mabel Normand has gone to . The worst thing about pictures is the way they have of removing people we like and taking them away from our devoted midst to the state of sunshine and flowers and California red ink and native sons and thing?

But Mabel has been at least half a Californian ever since she made her first success there. She goes back with all the weight of the added prestige she has gained in Goldwyn pictures in the East and even then she doesn't weigh very much. We mean this literally, of 'course, for we are very strong for Mabel, "if you know what we mean."  Now, seeing Mabel other than on the screen is not so easy as it sounds, for Mabel is notoriously forgetful of appointments. But she professes to like us, and we believe her, for when she made an appointment, with us she not only kept it, but she arrived there first, so that we found her waiting for us. It was like "Little Mabel, little Mabel, with her face against the pane."

"In one way I feel rather like the farmer, you remember, who said: 'Goin' to town to get drunk, and, gosh! how I dread it.' I know I'll be tickled to death once I'm out there, but, gosh how I dread leaving. One of the funniest jokes I ever heard was the "traveling for pleasure' phrase. It is about as sensible as the idea of going to the dentist for pleasure. I hate traveling!" said Mabel emphatically.

"But cheero! At any rate, there'll be no more of that ungodly trip over the ferry. There have been times when I could have killed the man who invented the . Irving Berlin can murder all the buglers he wants, but I'm against the man who slams the gates of the ferry and says, Next trip. "Everybody has been wonderfully kind back here. But I love the life in . And it is easier to work seriously. And I have missed dreadfully some of my friends who never come East. You see, motion pictures bring both coasts and all coasts together. That's one of the reasons why it's a delight to be a cinemese.

"Of course I hate leaving mother.  No, she isn't a stage 'mother.' She is the real thing in mothers, I can tell you. Every one always seems so surprised when I speak of mother. Don't I look as though I had a mother? She is the mother I told you of who had such long eyelashes. When I was little I used to call them thick mustaches. My week ends with her on have been the only domestic life I've had for the last few months. Living at hotels doesn't spoil your taste for home life; it makes you all the keener for it. That is the biggest sacrifice I've made in working. 1 can't very well ask mother to give up her country place and get accustomed to city life, which she detests. And I never could have lived with her on and got to the Goldwyn studios at in time to do any work. Neither can I ask her to come with me to , because she has to look after my little sister.

That's one reason my friends mean so much to me, no matter where I am", for a moment the Normand eyes, with their absurdly long, lacy lashes, looked out into the throng of passers-by, and there was a far away look in them.

"Oh, but are we downhearted No!" she said with a sudden and characteristically Normandesque change of mood. "I should jolly well rather say not, as Charlie Chaplin used to say. The war is over, and in a short while, I hope, she'll have my brother back. I wish I could be here to meet him . . ."

We shifted the conversation to . "It is a fact that you can work with ever so much more pep out there. For one thing, there aren't so many distractions. In fact, there isn't anything to do but make pictures, and when it gets too dark to work go to bed. That's life in . "And then the sunshine helps the artist to say nothing of saving money for the producer. There'll be no such problems and troubles as we had last winter, when time after time we had to stop work because the juice was cut off. And we always had to stop at interesting points."

We asked her what new play she was going to work on first. "Sis '!  she exclaimed, laughing. "Won't that be grand? I'm sorry I never saw Rose Melville in the part. I hear she was wonderful. She must have been, to be able to go on playing it and making money out of it for so many years.  "Broad comedy seems to be the only thing for me. The public pays the piper and has a right to call the tune.

Mr. Goldfish says he'll let me do nothing else in future. I suppose I'll have to spend the rest of my screen life rollicking as I did in Peck's Bad Girl and "A Perfect 36. Sis  is full of gorgeous chances. Do you know it? There's one advantage I shan't have to fuss much about dresses, and I can look as gloriously ugly as I darn please." No you can't, Mabel. You simply couldn't look ugly; no matter how hard you try, because we think you are a beauty, just as every one with good taste thinks.