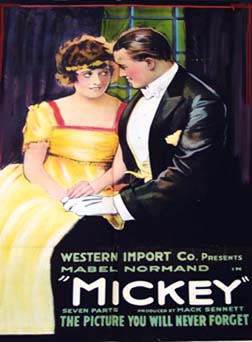 Mabel Normand may be best noted for her limberness in doing picture stunts but those who know her best also give the young woman credit for being not only a great reader, of the worlds best literature, but for a whole lot of native astuteness of judgment.

Everybody has had a try at guessing why pictures on ancient subjects didnt specially interest the picture fans.  Many picture directors have wrung their hands and torn their hair because their favorite pictures depicting Horatius holding the bridge, or the sorrows of some ancient lady of Greece, didnt get over, while the fact that the picture fans refused to get in a welter over the exciting things that happened in old Rome, has caused the loss of many a penny to fatuous producers.  Miss Normand has hit the nail on the head.

Tell you what it is, said Miss Normand, the other day, as she put on her make-up preparatory to some retakes in Mickey. the whole secret of public appeal of a picture is that the spectator may be able to put himself or herself into the role of the hero or heroine.  This trick of the public imagination is one that must be taken into account.  When a young man sees a man on the screen, he cant visualize himself in the role of the hero, if that hero wears queer looking clothes, and lives in a funny looking house and he cant imagine being in love with a lady in Judas all out of fashion.  Same way with the girl.  Her hero must be all dressed up with some place to go that she knows all about, and she herself must be able and willing to visualize herself in the part of the picture queen, who not only has curly hair and large, expressive eyes, but who wears clothes right up to the minute, too.