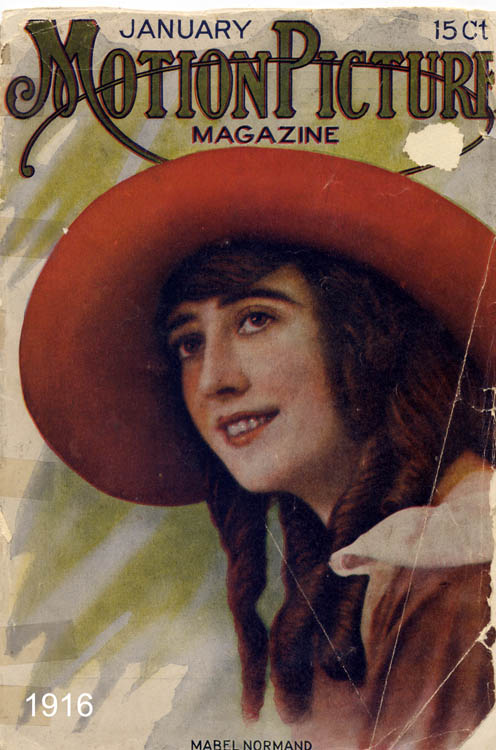 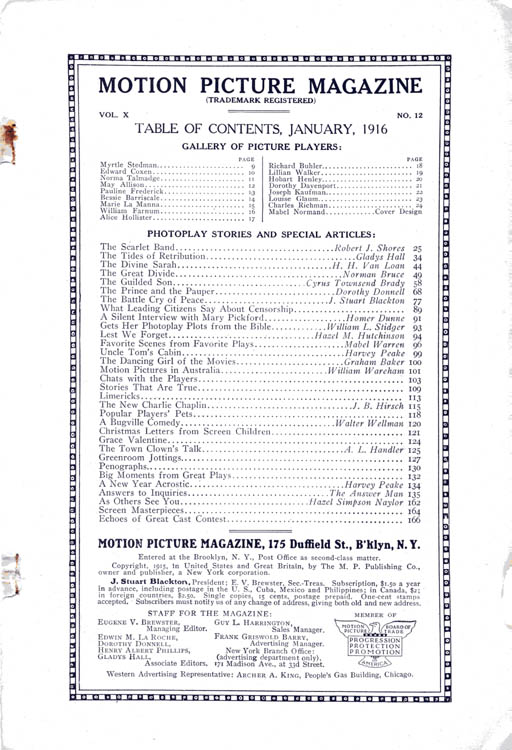 Heres a new Charlie Chaplin! The most universally known slapstick comedian of the film has burst the tawdry chrysalis of that Charlie Chaplin of the English music hall manner and manners.  The old Charlie Chaplin has seen that the very methods by which has personality achieved success bow imperil his unprecedented reputation by alienating a great part of the American public, to whom the novelty of his fun-making appeals less as familiarity with his farce bares offensive vulgarities.  He has realized the menace to his popularity, which has made him not at all up, and pursues a new fame, to be built on the basis of a more delicate art that will not countenance the broad sallies his old technique demanded  methods that his new metamorphosis eliminates as not in keeping with the American conception of humor.

This is the impression of the National Board of Censorship, gained by W. W. Barrett, of the executive staff of the board in an interview recently with Mr. Chaplin in the Essanay studios in .  Mr. Barrett, who returned the early part of this week from a tour of the made in the interests of the censorship board, had much to tell about his experiences with many of the worlds greatest Motion Picture directors and actors.  Charlie Chaplin, the director, actor, writer and manager of his own pictures, impressed Mr. Barrett more that did any of the other screen personalities with whom he came in contact.

Secretary Barrett explained that the National Board of Censorship had taken an unusual interest in Chaplins work, and expressed his belief that there are great possibilities in the comedians future work, both as a helpful influence in a community and as a factor in the artistic development of the Motion Picture.

An intimate afternoon spent with Chaplin in and about his studios served to convey to the censor impressions of Charlie Chaplin, not as we see him  cutting up funny capers and making faces  but close-up impressions which revealed Chaplin the artist and the business man.  His critic found him to be unlike and contrary to is stage appearance  a neatly and stylishly dressed young man; as charming and affable a boy  for he appeared to be but a youth  as anyone would wish to meet; a hard worker, who writes, acts, produces and manages; an unusually intelligent man, modest  not in the least affected by his great popularity, and very keen, businesslike and thrifty  not at all like the usual actor of the get-rich-quick variety.  Such is Charlie Chaplin as the National Board of Censorship sees him.

A heart-to-heart talk between Mr. Barrett and Chaplin revealed to the former the comedians thoughts and plans for the future.  According to Mr. Barrett, Chaplin, who is only twenty-five years old, is very ambitious.  He has shaped for himself the slogan, Art for arts sake, and he has dreams of unmeasured possibilities for the future of the films  all from an artistic point of view.  When he talks of the change he intends to make in his style of farce, it is in a very serious vein.  He spoke thus to the censor man:

It is because of my music-hall training and experiences that I am by force of habit inclined to work into my acting little threads of vulgarisms  not to hurt any one, but, in my opinion, and from an artists point of view, enough to render the picture vociferous and inartistic.  This Elizabethan style of humor, this crude form if farce and slapstick comedy that I employed in my work, was due entirely to my early environment, and I am now trying to steer clear from this sort of humor and adapt myself to a more subtle and finer shade of acting.

Mr. Barrett explained that Chaplins desire is to give the American public the best that is in him.  That there is latent in Chaplin a great force of original and productive mat4rial is the belief of the National Board of Censorship, and  the sooner the new style of farce  approaching comedy  is adopted by him, the sooner will there be a realization of the better kind of Motion Picture farce.  Chaplin admitted that the evolution of acquiring this newer and better style of acting is a slow and laborious process, after so many years of music-hall training; but that it eventually will be achieved by him is his one consolation.  One of his latest releases, The Bank, already has given evidence of Chaplins tendency toward straight comedy.  Chaplin, as an exponent of realism and spontaneity without equal, the Board of Censorship believes, is only on the crest of his popularity wave.  But Chaplin is very candid and reticent about his own work, and would not agree with Mr. Barrett that there was no Chaplin equal.  He feels that there was no Chaplin equal.  He feels that his brother Sydney is just as clever.

Charlie Chaplin attributes his success, said Mr. Barrett, to the novel character of his mannerisms, adapted from his pantomime experience.  He bases his actions on little traits of human interest and eccentricities.  He believes that the prolonged portrayal of the inebriate on the screen, and some of his actions when in a drunken stupor, are not really funny; they are extremely sad, to use his own words.  But what Chaplin does believe in and what went a great deal toward making his success, is the portrayal of a drunkard by human-interest touches, funny little capers that any well-meaning man in an intoxicated condition is likely to perpetrate.  This has the approval of the Board of Censors.

Mr. Barrett, as it was stated in the beginning, made a tour of the country, and particularly of the West, in the interests of the National Board of Censorship, to effect a correlation between the board and the countrys film producers on the basis of co-operation had existed heretofore, but it lacked so much in mutual interest and genuine co-operation that a better and firmer system of reciprocal and effective censorship had to b4e established.  Hence Mr. Barretts tour of the country.

Directors such as Griffith, Ince, Sennett and Reicher were interviewed and acquainted with the boards delimitation of the scope of the censors work, and such general information that would result in nothing but harmonious co-operation between the manufacturer of films and the censors.  The Board of Censorship feels that directors four thousand miles away often get out of touch with the work of the board, and when a producer loses sight of the censorship in the making of a film he is sometimes hastening the destruction of his own production and throwing away his firms money.

Charlie Chaplin, as a producer,  agreed with the National Board of Censorships representative that, if there must be a board of censors, the present National Board was the one, not any other.  He expressed his belief that there should prevail the existing system of construction co-operation between film-makers and people, thru criticism of films by a board of volunteers that reflects current morality in its decisions as ably as that difficult thing ever has been done.  Mr. Chaplin prefers that kind of censoring to the one that is nothing but a system of legal censorship by small local boards of untrained individuals appointed for limited terms and possessing limited ability, but unlimited destructive power.

Transcribed by Marilyn Slater, Keeper of the Mabel Normand Archive.