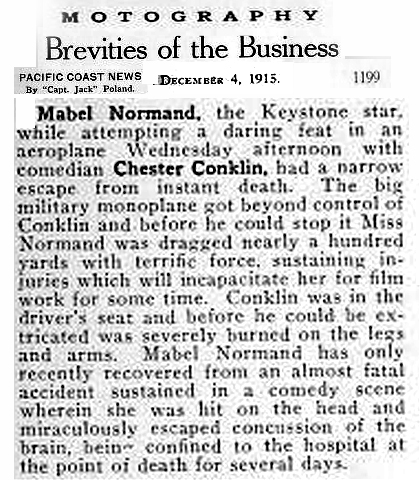 Brevities of the Business

Mabel Normand, the Keystone star while attempting a daring feat in an aeroplane Wednesday afternoon with comedian Chester Conklin, had a narrow escape from instant death.  The big military monoplane got beyond control of Conklin and before he could stop it Miss Normand was dragged nearly a hundred yards with terrific force, sustaining in juries which will incapacitate her for film work for some time.  Conklin was in the drivers seat and before he could be extricated was severely burned on the legs and arms.  Mabel Normand has only recently recovered in a comedy scene wherein she was hit on the head and miraculously escaped concussion of the brain, being confined to the hospital at the point of death for several days. (courtesy of John Armijo) 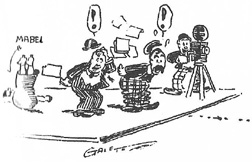 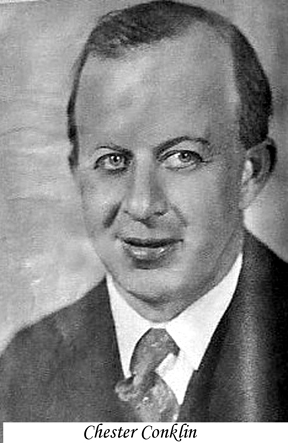 A note from the film historian, William M. Drew:  As it happens, the film with Conklin and the plane was made and is extant. Entitled "Dizzy Heights and Daring Hearts," it is described by Simon Louvish as the first film to involve an airplane chase. It was released on --but with Claire Anderson as the heroine. So was Mabel originally cast but then pulled out after an accident? Did she not mention it because she was unable to complete it and hence, it could not be cited as a visible example of her cinematic derring-do?

The Pacific Film Archive in , along with the San Francisco Silent Film Festival, have joined together to present a series of films devoted to aviation. "Dizzy Heights: Silent Cinema and Life in the Air" screens at the PFA February 23 through February 26 - 2012

Patrick Ellis, a doctoral student in the Department of Film and Media at UC Berkeley and guest curator of the series, notes "For many years, the vehicle in which most people first experienced flight was not the airplane, but the movie theater. The new flying machines were still prohibitively expensive and often dangerous, but the vertiginous thrills they provided could safely be simulated with a fisticuffs-on-the-wing film like Dizzy Heights and Daring Hearts (1915). That is, when the idea of mechanical flight did not seem simply far-fetched. If a ship could actually fly, it was thought, well then anything might fly: beds, houses, people. The great silent fantasists  Winsor McCay, Georges Méliès, Walt Disney  all explored these possibilities."  Thomas Gladysz  SF Silent Movie Examiner 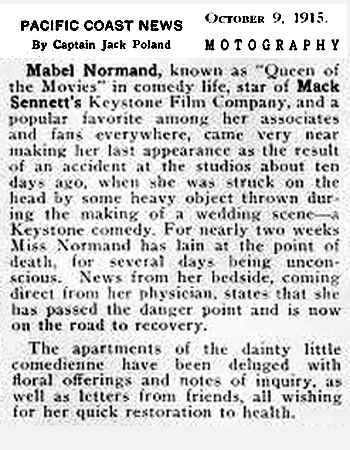