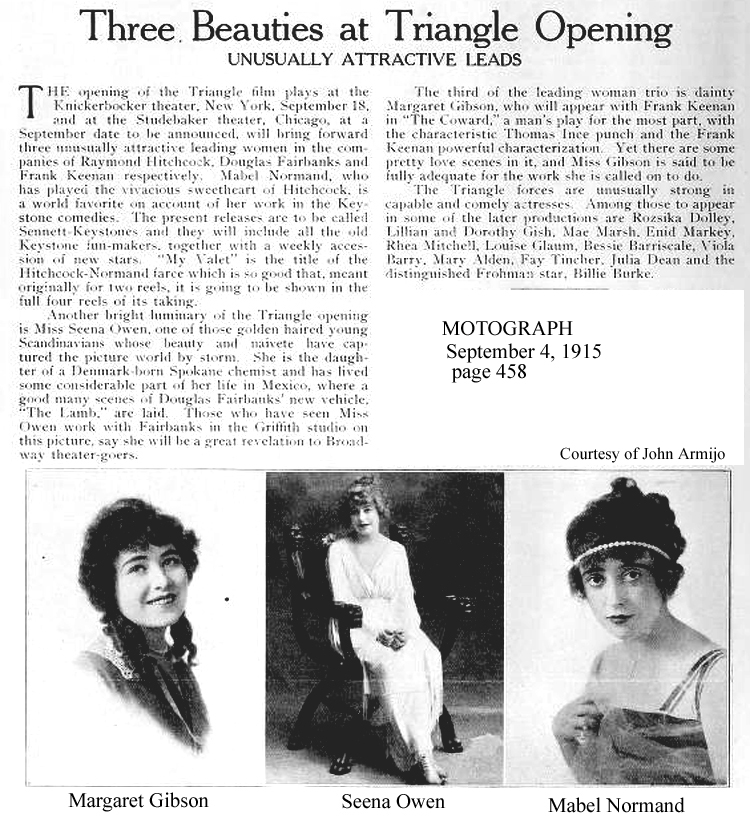 THE opening of the Triangle film plays at the Knickerbocker Theater, New York, September 18, and at the Studebaker Theater, , at a September date to be announced, will bring forward three unusually attractive leading women in the companies of Raymond Hitchcock, Douglas Fairbanks and Frank Keenan respectively.  Mabel Normand, who has played the vivacious sweetheart of Hitchcock, is a world favorite on account of her work in the Keystone comedies.  The present releases are to be called Sennett-Keystone and they will include all the old Keystone fun-makers, together with a weekly accession of new stars.  My Valet is the title of the Hitchcock-Normand farce which is so good that meant originally for two reels, it is going to be shown in the full four reels of its taking.

Another bright luminary of the Triangle opening is Miss Seena Owen, one of those golden haired young Scandinavians whose beauty and naiveté have captured the picture world by storm.  She is the daughter of a Demark-born chemist and has lived some considerable part of her life in , where is a good many scenes of Douglas Fairbanks new vehicle.  The Lamb are laid.  Those who have seen Miss Owen work with in the studio on this picture; say she will be a great revelation to Broadway theater-goers.

The third of the leading women trio is dainty Margaret Gibson, who will appear with Frank Keenan in The Coward, a mans play for the most part with the characteristic Thomas Ince punch and the Frank Keenan powerful characterization.  Yet there are some pretty love scenes in it and Miss Gibson is said to be fully adequate for the work she is called on to do.

The Triangle forces are unusually strong in capable and comedy actresses.  Among those to appear in some of the later productions are Rozsika Dolley, Lillian and Dorothy Gish, Mae Marsh, Enid Markey, Rhea Mitchell, Louise Glaum, Bessie Barriscale and the distinguished Frohmas star, Billie Burke.